A rendering of a light industrial and self-storage complex north of downtown Victoria at 2300-2312 Douglas Street. A former proposal for the site included retail spaces and 60 rental apartments above.  Bradley Group of Companies

commercial, Urban core
Victoria's nixing of rental dev north of downtown yields self-storage proposal with light industrial spaces
Mike Kozakowski, CITIFIED.ca
Following the City of Victoria’s nixing of a proposal to build retail spaces and 60 affordable apartments on Douglas Street at Queens Avenue, a new concept has emerged with usage aligned with the City’s vision for lands north of downtown.
Metro Vancouver-based Bradley Group of Companies has proposed a four-storey building with industrial units along its ground floor and three levels of self-storage spaces above at 2300-2312 Douglas Street. The pitch corresponds with city hall’s desire to retain a significant portion of Burnside-Gorge’s southern half as light industrial and commercial space in lieu of residential densification. High density residential uses reportedly sunk a prior proposal from Laing Properties.
Bradley’s submission will accommodate flexible industrial spaces ranging from 300 to 1,000 square feet. And self-storage units will help address an “acute shortage” of storage spaces in the urban core, as per an information packaged supplied by the developer to the City.
Parking will be in the form of a encased lot accommodating 19 vehicles, Bradley's documents show. The property's current use is as a surface parking lot.
The architectural design, from BFA Studio Architects, is inspired by shipping containers “commonly found in industrial environments,” according to Bradley, and “particularly those with a marine interface.” As a side note, the proposal’s location is some 250 meters from the shores of Rock Bay and 500 meters from the banks of the Upper Harbour. The massing fronts primarily onto Douglas Street/Trans Canada Highway.
According to municipal documents, the developer is seeking a development permit with variance in lieu of Laing Properties’ rezoning application.
Laing’s residential and commercial design emerged in the spring of 2018. Following architectural refinements throughout the planning process which at one point included an automotive dealership for Silver Arrow Cars, the development was cancelled in early 2020 and the property put up for sale in light of municipal plans encouraging alternate uses for the property. C
Receive Citified's timely real-estate news straight to your inbox. Sign up for our newsletter, and connect with us on Facebook: 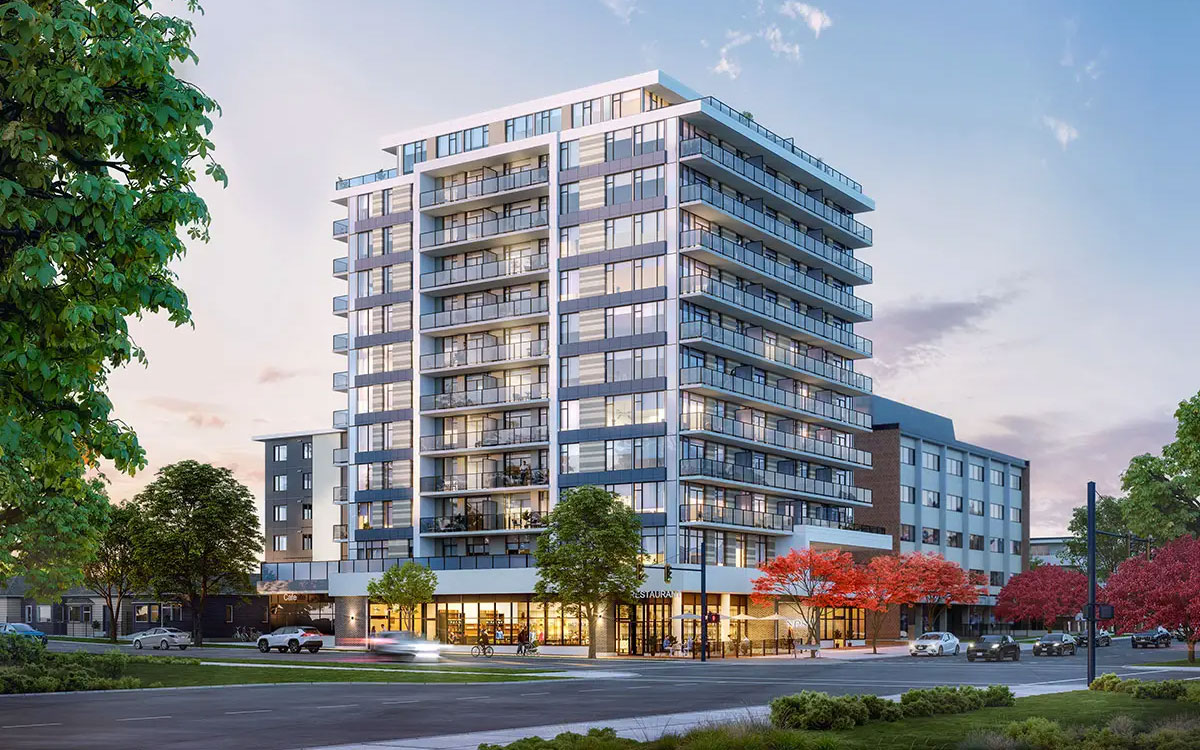