Planning documents identify the size and scale of two residential towers planned for lots between Speed Street and Frances Avenue off Douglas Street. The two-tower development is facing issues with soil conditions and will require approvals for changes to its below-grade parkade among other amendments.  Praxis Architects | Graphic by Citified.ca

commercial, condos, rentals, Urban core
Difficult soil conditions delay twin tower residential dev near Mayfair mall
MIKE KOZAKOWSKI, CITIFIED.CA
An approved twin tower residential complex just a stone’s throw from Mayfair Shopping Centre is back before City Hall as project proponents seek to overcome a major hurdle.
A pre-construction soil analysis of the building site – situated between Speed Street and Frances Avenue off Douglas Street – has uncovered issues described by geotechnical engineers as “some of the worst in the city” in reference to 'dewatering' of the land and the impact a deep excavation could have on neighbouring properties.
In order to proceed with construction of the 12-storey towers, the developer has requested permission to amend the underground parking component approved by the City of Victoria that was to have accommodated 200 vehicles in a two level design.
Considering the soil conditions and the technical challenges they present, the architects have re-submitted building plans to reflect a single level of underground parking with surface parking occupying a larger proportion of the development site. In order to carry out the changes, the project’s Frances Avenue commercial component has been reduced to just over 6,800 square feet from approximately 26,000 square feet while secondary parking access off Speed Street has been removed and replaced with a green space.
The developer is also seeking approvals to replace a portion of the project’s commercial space with eight three-bedroom below-market rental units along Frances Avenue.
Other changes relate to the replacement of Juliet-style balconies with formal balconies for residences in the towers, alterations to pedestrian access throughout the site, altered access to bicycle storage and an uplift in unit density from 176 suites to 184, including the eight below-market three-bedroom rentals and 10 two level townhomes.
Municipal approvals for the Speed Street and Frances Avenue towers were received in 2016 for 87-units of rental apartments and 89-units of condominiums, although the developer retained the option to convert all units to rental. The project subsequently moved from the approvals stage to the pre-construction stage which uncovered the soil conditions.
Construction of the towers could begin as early as next year with completion some two years later. C 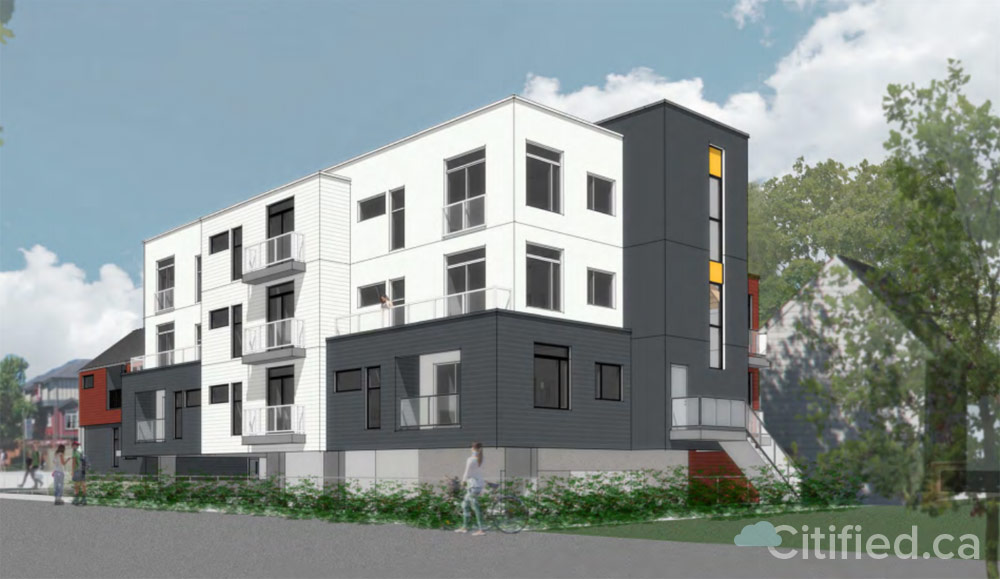