A Sooke Tim Hortons is one step closer to becoming a reality following the T'Sou-ke First Nation's signing of a long-term lease agreement with the corporation. The coffee shop is eyed for lands along Sooke Road between Edward Milne Community School and Saseenos Elementary School together with a Petro-Canada gas station. Future phases of the development may include a medical and dental facility.  Tim Hortons

commercial, West Shore
Sooke Tim Hortons gets green light as medical/dental facility eyed for future Sooke Rd. complex
MIKE KOZAKOWSKI, CITIFIED.CA
Despite lengthy delays a Sooke Tim Hortons restaurant, a Petro-Canada gas station and a convenience store are a major step closer to becoming reality, Citified has learned.
The T’Sou-ke First Nation confirms TDL Group Corporation, formerly known as Tim Hortons Inc., has entered into a 10-year lease agreement with the T’Sou-ke Nation Development Corporation (TNDC) to open a drive-through Tim Hortons franchise on lands situated along Sooke Road between Edward Milne Community School and Saseenos Elementary School.
The coffee shop will be situated within the same building as the Petro-Canada gas station’s convenience store.
As per the agreement with TNDC, Tim Hortons will pay a percentage-based rent to the Nation totalling six percent of gross sales which is estimated to generate a large portion of the $95,000-to-$125,000 in annual rents collected from the complex. The monies will be allocated to re-investment in future phases of what is planned as a multi-acre development on T’Sou-ke land along the Sooke Road corridor.
The T’Sou-ke nation envisions upcoming phases to include such uses as a medical and dental facility, and retail storefronts. Those plans, however, remain in their infancy.
A joint Petro-Canada and Tim Hortons job fair is planned for this summer although no dates have been announced. Some 20-to-25 full-time and part-time jobs are planned for Tim Hortons with an additional six-to-ten in the gas station and its associated convenience store.
Construction is expected to begin by late summer or early fall of 2018 with completion by early or mid-2019.
First announced in February of 2016, a Sooke Tim Hortons franchise has been a long-awaited addition to the town located approximately 40 kilometers west of downtown Victoria along the shores of the Salish Sea.
The 2016 concept envisioned a Tim Hortons coffee shop situated within an Esso-branded gas station and an On The Run convenience store. The plans have since shifted to Petro-Canada as the development’s gas retailer. C
Receive Citified's timely real-estate news straight to your inbox. Sign up for our newsletter. 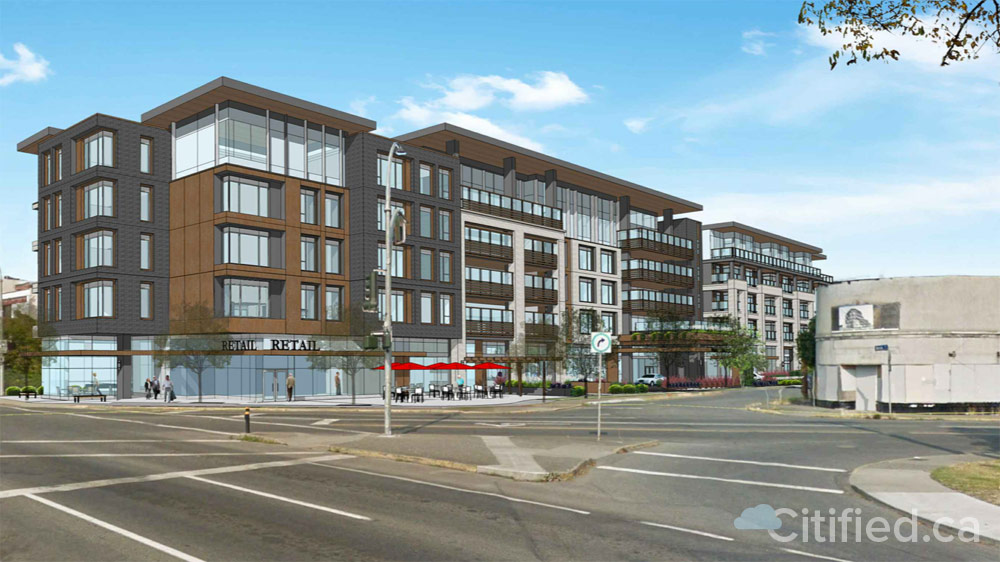