An artist's rendering depicting the 20-acre Bayview Place development in Vic West. The structures outlined in white comprise Lot 4, the phase of the project that will see a seniors residence (right) and a residential low-rise (at centre).  Focus Equities.

The next phase of Vic West’s 20-acre Bayview Place community will consist of a seniors residence and a low-rise residential building, according to marketing materials released by land owner Focus Equities.

The company is looking to secure partners that will take its approved plans and carry the vision through to completion, an option already used at the multi-phased development’s last two phases (one of which has been completed and the second currently underway).

Municipal approvals for Bayview’s fourth phase, known as Lot 4, were obtained several years ago and will grant a development consisting of two buildings in the form of a 153,000 square foot seniors complex rising to five-storeys and a 29,800 square foot residential low-rise allotted a maximum height of five-storeys, although the final product is likely to be shorter.

Parcel A, the seniors residence, will be the largest of the two buildings and plans indicate its location will straddle the southeastern edge of Bayview Place’s rocky outcropping above Tyee and Kimta roads. It will also include 2,000 square feet of commercial space.

Parcel B, the residential component, will front onto Kimta Road west of Parcel A and to the south of existing buildings. There will be no commercial usage.

A finalized unit count for both parcels and building designs will be determined by the designated builder (or builders) at a later date.

Bayview Place has been a hive of activity in recent years. Completed in 2014 was a 21-storey condo tower known as Promontory. And currently under construction is its 17-storey counterpart with a five-storey lowrise wing, dubbed Encore.

Following the completion of Lot 4, future phases will encompass a portion of the property known as Roundhouse, where Focus Equities has approvals for several highrise residential towers centred around a large commercial village in restored railroad buildings formerly used by the Esquimalt and Nanaimo Railway. Commercial tenant retention is currently underway and restoration of the heritage buildings may begin as early as next year. C 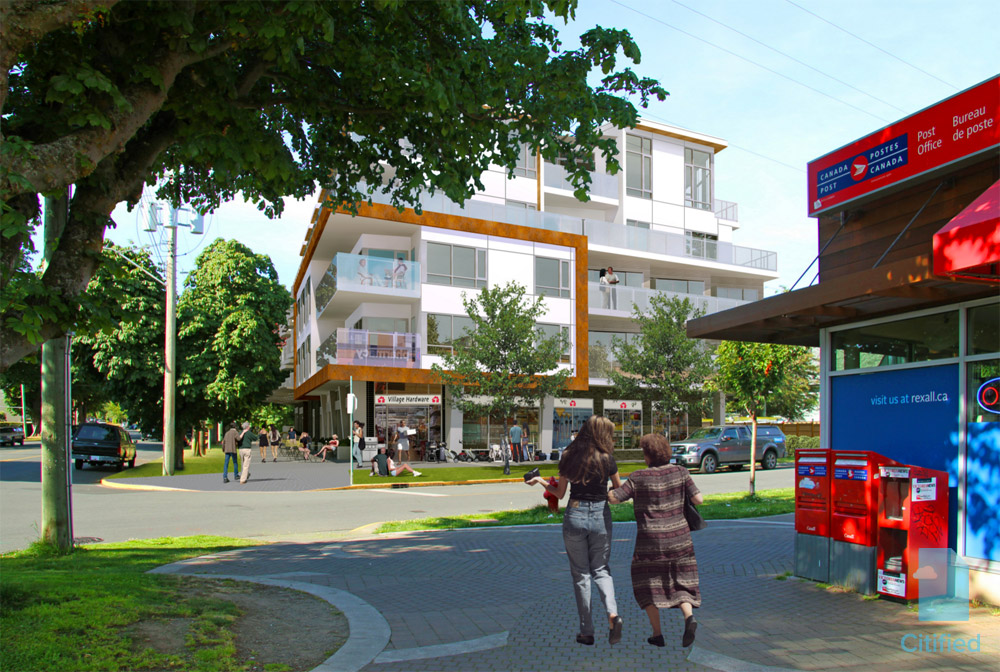