An aerial of Uptown Shopping Centre, looking north. A proposed nine-storey residential building will be situated at the northwest corner of the Uptown property.  Citified.ca.

Update to this story: updated information on this proposal has been submitted to Citified. The information described below has changed. Please refer to the updated story published on January 27th, 2016: Update: 134 rental residences planned for 11-storey tower at Uptown Shopping Centre

Approximately 100 rental apartments are planned as the residential phase of Uptown Shopping Centre, according to planning documents submitted to Saanich Municipal Hall.

As part of the project's fourth phase developer Morguard Investments is proposing a nine-storey mid-rise building on the northwest corner of the Uptown property, the remaining undeveloped portion of the shopping centre. The “v-shaped” design will include a commercial ground floor, an above-ground parking component and will front onto Carey Road at Ravine Way adjacent to Uptown's third phase currently under construction.

Originally planned to include some 650 residences as part of the overall development concept, the market downturn in the latter half of the last decade derailed plans for two Uptown condo towers envisioned by Morguard’s market condo development partner Westbank Corp. Since then construction at Uptown had been limited to retail space and offices. However, in early 2015 Morguard’s announcement of its third phase, anchored by a Whole Foods grocery store, also confirmed that a future residential component was in the works.

The residential proposal is in the early stages of the municipal planning process with a design reveal anticipated next month. Pending approvals, construction could begin later this year or in early 2017 with completion some time in 2018.

The development community has seen Uptown as a major catalyst for Saanich's core and has begun to capitalize on the immense draw created by the shopping centre. The most recent addition to the area was in the form of two four-storey condo buildings on Rowland Avenue at Huxley Street, known as Uptown Place. Abstract Developments received approvals in 2013 for a mixed-use residential and commercial development on Boleskine Road at Whittier Avenue west of Uptown consisting of some 60 residential units above a commercial ground floor. A 15-storey proposal a stones throw from Morguard's rental building, on Harriet Road at Crease Avenue, so far represents the tallest residential development proposed since Westbank's plans. And along Carey Road between Huxley Street and Vernon Avenue the Capital Regional District has recently built several affordable housing projects and a seniors care facility, adding a sizable amount of density to the area. C 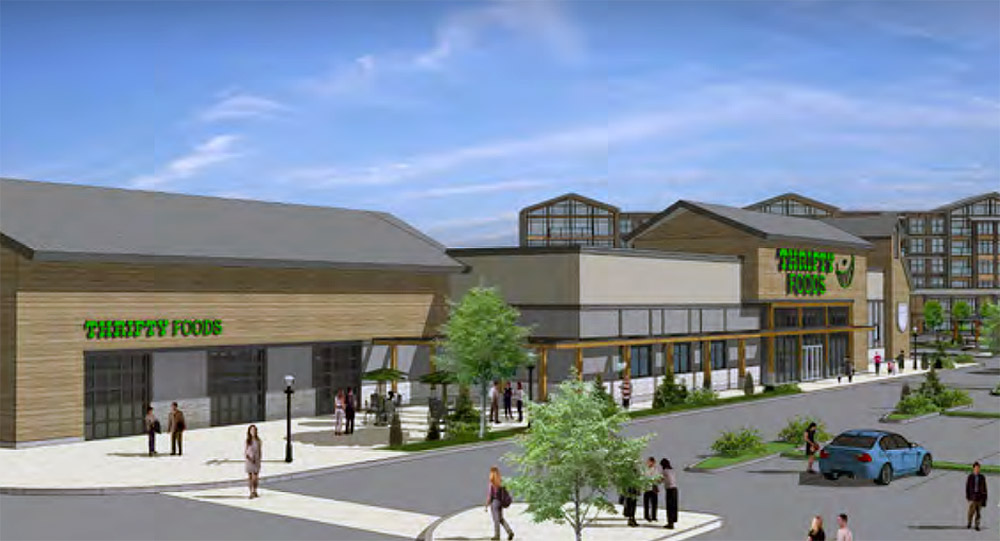