commercial, condos, rentals, Downtown Victoria
Excavation begins for what may become Vancouver Island's tallest building
CITIFIED.CA STAFF
Excavation for what could become Vancouver Island’s tallest building has begun on the site of the former Hudson's Bay Department Store parkade.
Vancouver-based Townline, developer of downtown Victoria's Hudson District, will undertake nearly a year’s worth of excavation and rock blasting to prepare a five-level underground component for Hudson Place One and Two, a duo of mixed-use residential and commercial towers that could rise to 30 and 17-floors, respectively, and cap off over a decade of development at the District.
“We’ve identified a 10 month excavation time frame for both towers, although it likely won’t be continuous and there may be a gap in between the two phases,” says Townline’s director of development for Victoria, Justin Filuk.
Rock blasting notices posted to buildings adjacent to the Hudson Place site, situated along the 700-block of Herald Street and the 1700-block of Blanshard Street, indicate a blasting schedule that could begin as early as May 11th.
In March Townline unveiled plans to build a tower rising as high as 30-storeys above Herald Street between the former Hudson's Bay Department Store (home of the Victoria Public Market) and Blanshard Street. If built at or above 27-storeys, what would become Victoria’s tallest building would also rise above Vancouver Island’s tallest building, a title currently held by Nanaimo’s 26-storey Beacon condominium tower. Townline secured approvals some years ago for the site that would allow a building standing 24-storeys tall.
Although details pertaining to the final height and design have been kept under wraps as the proposal makes its way through the municipal process, Townline will unveil its finalized concept at a Hudson District block party scheduled for the last week of May.
The company's latest development nearing completion at the Hudson District is the 15-storey Hudson Walk Two purpose-built rental tower situated the intersection of Blanshard Street and Caledonia Avenue. The project’s 106 apartment units are now 60% pre-leased. Occupancy is expected by mid-summer. C 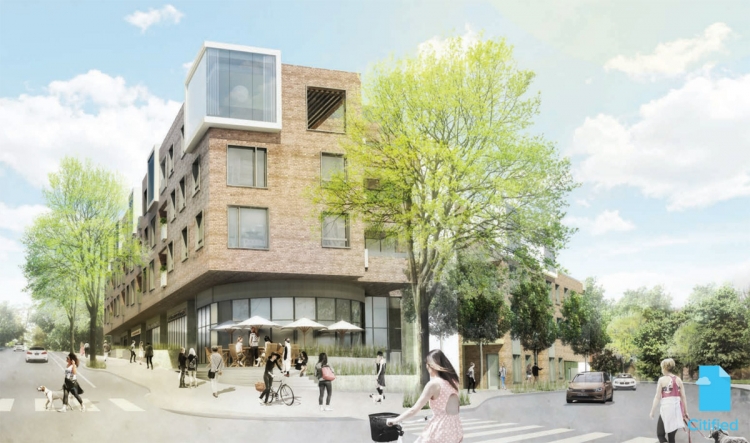