A partially excavated site along the 700-block of Herald Street could be the future home of Vancouver Island's tallest building. A proposal to build a condominium tower rising as high as 30-floors has surfaced for downtown Victoria's Hudson District.  Citified.ca

commercial, condos, Downtown Victoria
Vancouver Island's tallest building to rise above downtown Victoria
MIKE KOZAKOWSKI, CITIFIED.CA
The tallest building on Vancouver Island could start to rise above the streets of downtown Victoria this fall, according to preliminary plans recently unveiled by development firm Townline.
The Vancouver-based builder of downtown Victoria’s mixed-use residential and commercial Hudson District – bordered by Caledonia Avenue and Douglas, Fisgard and Blanshard streets – is preparing to make an application to the City of Victoria to amend the height and massing of the District’s two-tower Hudson Place development. Until recently the former Hudson’s Bay Company (HBC) department store’s parkade had occupied the site.
“We’re currently exploring the idea with the City to raise the permitted height of our 24-storey Hudson Place 1 condominium residence, possibly up to 30-floors,” says Justin Filuk, Townline’s director of development in Victoria, adding that a taller building will “afford [Townline] the opportunity to utilize the site’s allotted density through a slimmer and more refined design.”
Townline’s roots in downtown Victoria stretch back to over a decade when the firm secured approvals for its Hudson District concept that encompassed the transformation of the former HBC department store into loft-style residences and the construction of a 12-storey rental tower. Approvals were also granted for two additional towers rising to 24 and 17-floors (collectively referred to as Hudson Place).
Several years ago Townline expanded the District through a land acquisition north of Herald Street that is now the site of Hudson Walk One, a 16-storey rental building completed last summer. Its slimmer 16-storey counterpart, Hudson Walk Two, is scheduled for occupancy later this year.
“Townline has been a part of downtown Victoria’s transformation from a commercial-focused urban centre to one that is today a quickly growing mixed-use neighbourhood,” Filuk said. “There are positive benefits that come with adding more residential units to the mix, it only adds to the growing vibrancy of the downtown core."
Filuk confirms Hudson Place could see upwards of 350 residences split between the proposed 30-storey tower, slated for the 700-block of Herald Street, and a shorter 17-floor highrise fronting onto Blanshard Street.
“The taller tower will consist of some 180-units with layouts ranging from studios to penthouses. The final building at the District, which will be in the form of a 17-storey highrise, will have a similar overall density to its larger counterpart and a focus on smaller units.”
Excavation and ground preparation for the first phase of Hudson Place will start this spring. Pending municipal approvals, construction will follow several months later. The build-out will be split into two phases with first efforts focused on the larger tower’s completion.
Vancouver Island's present-day tallest building is Nanaimo's 26-storey Beacon condominium tower rising 76-metres above downtown Nanaimo. Built in the mid-1990's, Beacon usurped the title from Victoria's 62-metre, 22-storey Orchard House condominium tower built in James Bay in the late 1960's. In 2014 Vic West's 21-storey Promontory condominium tower surpassed the height of Orchard House and claimed the title of Victoria's tallest building at just over 66-metres tall. C 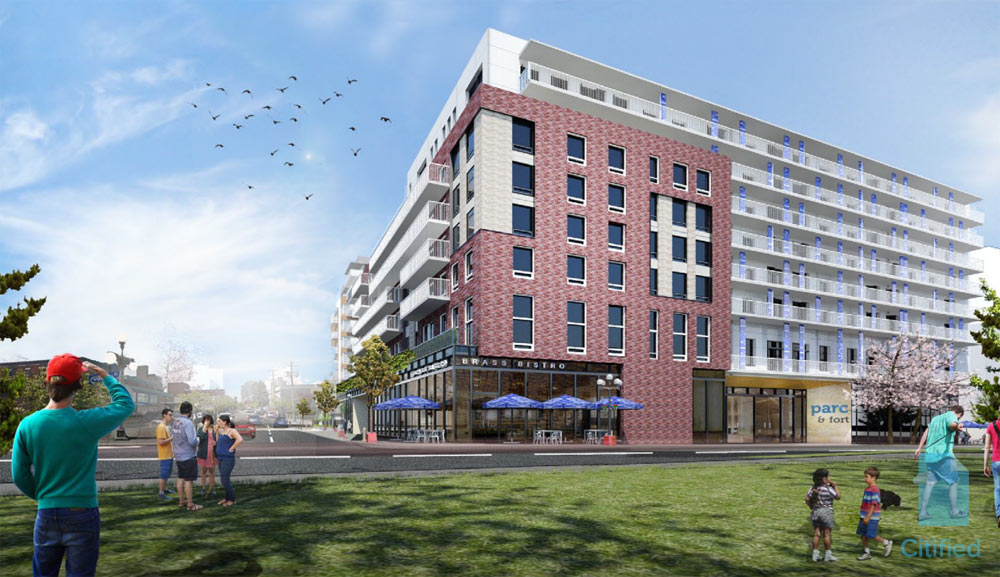