An aerial of downtown Victoria and surrounding neighbourhoods. The Capital Region of B.C. ranks as one of Canada's hot spots for emerging technologies.  Citified.ca

commercial, Downtown Victoria, Saanich Peninsula, Urban core, West Shore
Victoria ranks high among Canada's leading tech towns: industry report
MIKE KOZAKOWSKI, CITIFIED.CA
Victoria’s emergence on a high-profile tech industry ranking identifying Canada’s leading technology clusters underpins the Capital’s role as a centre for innovation and a welcoming environment for start-ups.
A report issued by commercial real-estate brokerage CBRE has identified the south Island as a rising star among Canada’s 20 key tech clusters, otherwise known as urban centres with an established tech industry, that are critical to ensuring start-ups have access to investor capital, unique supports and opportunities to secure sufficient human resources.
“Victoria’s debut on CBRE’s list is at a very respectable number-ten spot,” says Ross Marshall, Vice-President of CBRE’s Victoria office.
“This is the first time the list has been expanded to include more than ten technology clusters and Victoria placing in the top-ten confirms what so many of us have suspected, that the region plays an integral role on a national scale.”
Marshall says Victoria’s allure among start-ups and established firms on the verge of expansion is largely tied to the city being home to a high volume of former tech executives with an acute understanding of the industry. Commonly referred to as angel investors, these individuals help incubate start-ups and can guide growing firms towards funding opportunities.
Bridging streamlined access to capital with lower operating costs (compared to larger markets) and a highly educated pool of talent further tips the scale in Victoria’s favour.
“Victoria out-competes ten technology clusters in Canada primarily through its established network of local investors, its relatively low cost of doing business and an urban lifestyle that has wide appeal,” Marshall said. “So while Toronto and Vancouver may pull further ahead in some ways, there are aspects to those centres that won't draw in certain organizations for a variety of reasons.”
Over the last half-decade local computing jobs have surged by 1,000 full-time workers, representing a 16% jump and firmly establishing the sector as one of the fastest growing employment pools in the region. The total economic impact of the industry’s local activities is now estimated to be $5 billion annually, outpacing traditional stalwarts such as tourism and the marine-related trades.
In addition to the billions of dollars in outputs, the vitality of downtown Victoria has become increasingly dependent on tech investor inputs as capital funnelled towards the revitalization of aged buildings works to transform underperforming properties into thriving work-share spaces and purpose-built offices.
A number of commercial buildings in downtown Victoria, particularly along the Fort Street corridor, have been repurposed in recent years into mini tech campuses in the heart of the city. Even the presence of Tectoria’s new office along the 700-block of Fort Street has brought upon a coming-of-age for an industry that has remained relatively hidden over the last two decades but which is starting to emerge as a major component to downtown’s vitality.
“Landlords receptive to the technology industry operate in different ways to traditional commercial real-estate institutions, and without their practices many local firms would not be as established or as strong as they are today. Meanwhile a number of buildings and commercial spaces throughout the downtown core would still be empty for lack of suitable tenants,” Marshall said.
The primary difference between a tech-friendly work space and a traditional office environment is the flexibility of lease terms. Tech companies can morph rapidly from one month to the next like adding 15 employees in a matter of weeks and requiring a new space or the rapid expansion of an existing space. Such changes can present challenges that are difficult to accommodate under traditional lease terms.
“Tech-friendly landlords understand the need for flexibility throughout the lifecycle of a tech start-up. A tenant may consist of three of four people at the beginning of the year and have a need for 500 square feet. By the end of the year they could be looking at 5,000 square feet to meet the needs of their growing workforce. The ability to pivot with a landlord open to moving between offices, expanding spaces, even retracting them if necessary, is critical to the success of these companies.”
Recent noteworthy investments on the real-estate front include the repurposing of a four-storey office building in the 800-block of Fort Street to tech offices – complete with gondolas on the roof and a helicopter in the lobby, but hey, that’s tech for you – and Tectoria’s relocation from the suburbs into a purpose-restored downtown building. Jawl Properties’ newly-built Douglas House project at 1515 Douglas Street is now home to several local tech firms and numerous start-ups have descended onto a myriad of office spaces in the downtown core’s Old Town district in vogue for its historic brick buildings and unique work spaces.
Future investment could see the repositioning of the Times Colonist Building just north of Bay Street (in the emerging Humber Green neighbourhood) into the Victoria Press Building, a modern tech park on the edge of downtown. As envisioned, the conversion would transform the complex into a technology hub complete with a residential component and various amenities.
Below is the 2018 list of CBRE’s top-20 technology clusters in Canada along with their attractiveness rating based on various criteria deemed key to establishing an office in each respective region: 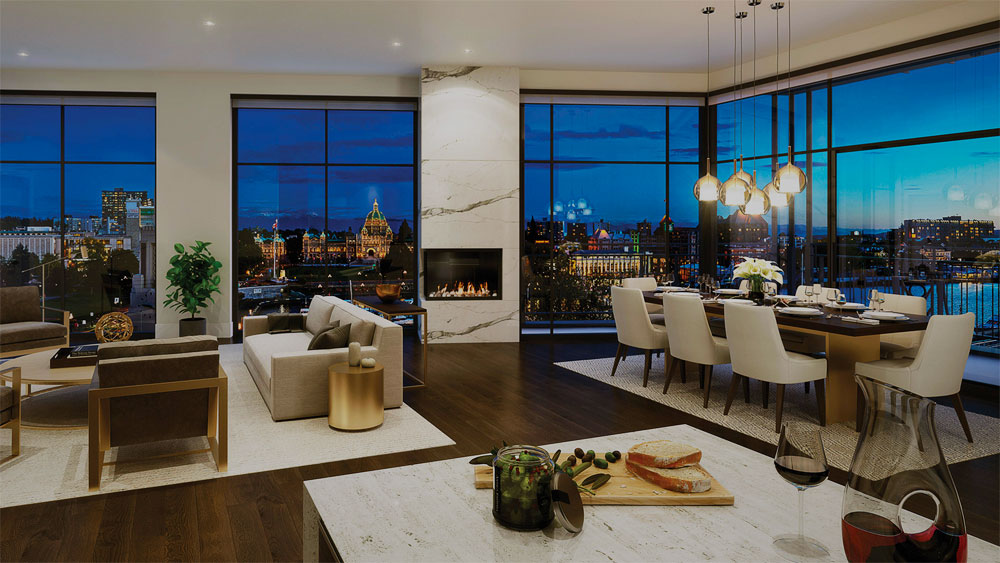