Tweet
An aerial view downtown Victoria and the Fernwood neighbourhood. The outline (in blue) of Chard Development's three-building project site between the 1100-blocks of Yates and Johnson streets at Cook Street shows its context within the two districts.  Citified.ca
commercial, condos, rentals, Downtown Victoria
Downtown daycare, affordable condos pitched as part of three-building redev of high-profile Ithaka Greek Restaurant block
MIKE KOZAKOWSKI, CITIFIED.CA
A high-profile city block enveloped by the busy thoroughfares of Yates, Cook and Johnson streets is poised for redevelopment into a mixed-use residential and commercial node, Citified has learned.
Vancouver-based Chard Development has unveiled plans to transform several parcels surrounding the Victoria Professional Building at 1120 Yates Street into a condominium tower at the corner of Cook and Yates streets, an affordable condominium along Cook Street, and a rental complex fronting onto Johnson Street.
The aged mixed-use office and retail building will undergo an interior and exterior modernization along with a comprehensive expansion of its on-site parking via a multi-storey underground parkade accessible to commercial tenants, their clients and future occupants of the three residences.
As currently envisioned, the tallest of the three planned residential buildings will rise to 12-storeys and occupy land west of the Victoria Professional Building that is currently the site of a single-storey strip mall home to Ithaka Greek Restaurant and several other businesses. The tower will include a daycare on its second floor targeting nearby families and downtown workers. Floors three-through-twelve will consist of market condominiums.
An eight-storey affordable condominium with frontage onto the 1300-block of Cook Street will follow Chard Development’s (recently sold-out) 20-storey Vivid at the Yates ownership model that presented lower purchase pricing for eligible individuals through a partnership with BC Housing. Chard has not confirmed whether BC Housing or another housing partner will be involved in the project.
And slated for a present-day surface parking lot, a purpose-built six-storey rental apartment will occupy the land’s Johnson Street frontage.
Together the three upcoming buildings are expected to yield approximately 275-units of various types of housing, although Chard Development has yet to confirm the total density the company is likely to pursue as part of its application process.
The project is one of several undertakings set to rapidly transform the Cook Street corridor that splits the City of Victoria’s high density Harris Green neighbourhood and the lower density, traditional single-family-dwelling neighbourhood of Fernwood. Already underway is Tenfold Project’s sold-out Wade condominium on parcels immediately to the north of the Chard site. The 102-suite project incorporates the mid-century Medical Arts Building’s transformation from offices into housing while a new-build portion will rise on land formelry used as a surface parking lot on Cook Street at Johnson Street.
To the west of Chard’s proposal developer Jawl Residential recently unveiled plans for a four-building redevelopment of the Pacific Mazda property between the 1000-block of Johnson and Yates streets at Cook Street. That project’s first phase will materialize as an 11-storey affordable rental tower along Johnson Street with the City of Victoria’s modernized #1 Fire Hall occupying its ground floor.
To the south of and kitty-corner to Chard's Victoria Professional block two vehicle dealerships, Audi Victoria and Harris Dodge, are themselves eyed for redevelopment in the coming years, with the latter dealership’s land currently undergoing soil testing.
A community meeting scheduled for later this month will outline Chard's project specifics in greater detail as part of the developer’s initial public outreach process.
Chard Development is one of the most prolific residential developers in downtown Victoria and nearby districts with 700-units completed, 257 under construction and in addition to the homes outlined in this article, over 160-units in planning along the 1300-block of Broad Street between Yates and Johnson streets in Victoria’s Old Town. C
Receive Citified's timely real-estate news straight to your inbox. Sign up for our newsletter. 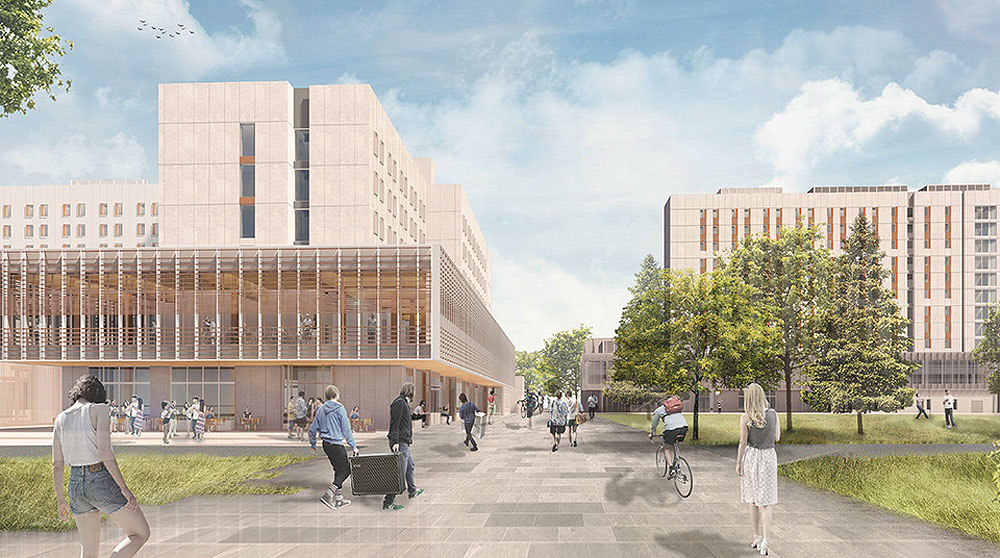