An artist's rendering of 2300 Douglas Street, a six-storey, mixed-use purpose-built rental building with a ground floor Silver Arrow Cars luxury automobile dealership with a single floor of offices above. The project may also include a 10% affordable housing component through a partnership with Pacifica Housing.  Laing Properties

commercial, condos, rentals, Urban core
Luxury auto dealership, offices and rental apartments pitched for Douglas Street south of Bay Street
MIKE KOZAKOWSKI, CITIFIED.CA
Victoria-based Laing Properties and luxury auto dealer Silver Arrow Cars have unveiled plans to build a six-storey mixed-use commercial and residential building on the northern fringe of downtown Victoria, Citified has learned.
Developer Ian Laing’s concept – situated along the 2300-block of Douglas Street between Queens Avenue and a Dairy Queen restaurant – would include Silver Arrow Cars’ showroom at grade level, offices on the second level and four floors of rental housing.
Located just a stone’s throw from downtown Victoria’s highrise residences and office towers, the development site is in the City’s Burnside-Gorge neighbourhood with planning guidelines that prioritize industrial uses along the west side of the Douglas Street corridor. However, the possibility of a landmark project materializing in an otherwise industrial, nondescript precinct of the city centre has the local community association nodding in approval.
“Based on the feedback we’ve received following our initial consultation meetings, the community association is actually quite excited,” Laing says. “They like it, and given that the building would be in an area that they feel could use revitalization and help build the community by having more pedestrians on the street, they would like to see it proceed.”
Laing’s initial plans for the residential component included only three levels of purpose-built rental apartments. That changed following consultation with Burnside-Gorge residents.
“‘Maybe add another floor and incorporate affordable housing into the project,’” Laing recalls as the key suggestion during feedback sessions. “I said absolutely we can do that, and have since reached out to Dean Fortin at Pacifica Housing who will provide us with proposals on how we can convert 10% of the units into affordable housing.”
The current vision could yield approximately 60 residences in studio, one-bedroom and two-bedroom configurations. With the community’s support for a larger massing, six of those units would be added to the City’s affordable housing stock.
Two levels of underground parking will provide ample capacity for Silver Arrow Cars, the office component and residences.
Pending municipal approvals, the project could proceed by next year with completion in 2020 or 2021. The Silver Arrow Cars showroom, located at 565 David Street, would relocate to Douglas Street upon project completion.
Victoria's 'mid-town' area between downtown Victoria-proper and Mayfair Shopping Centre at the Saanich municipal border is currently the focus of several high-profile development proposals that could rapidly reinvigorate the heavily commercialized and industrial district.
Alongside Laing's proposal the Times Colonist Building north of Bay Street could be modernized into a mixed-use office and commercial hub that also includes a mid-rise residential tower on its parking lot. And up the block on Douglas Street at Hillside Avenue the historic Scott Building is also part of a development proposal that is in its early conceptual stages. Developers there plan to rehabilitate the Scott Building while adding residential density to its surface parking lot along Hillside Avenue.
In recent years several development projects have completed in the immediate area and include the six-storey Midtown Court office complex, a Volvo automobile dealership and a mid-rise seniors residence. C 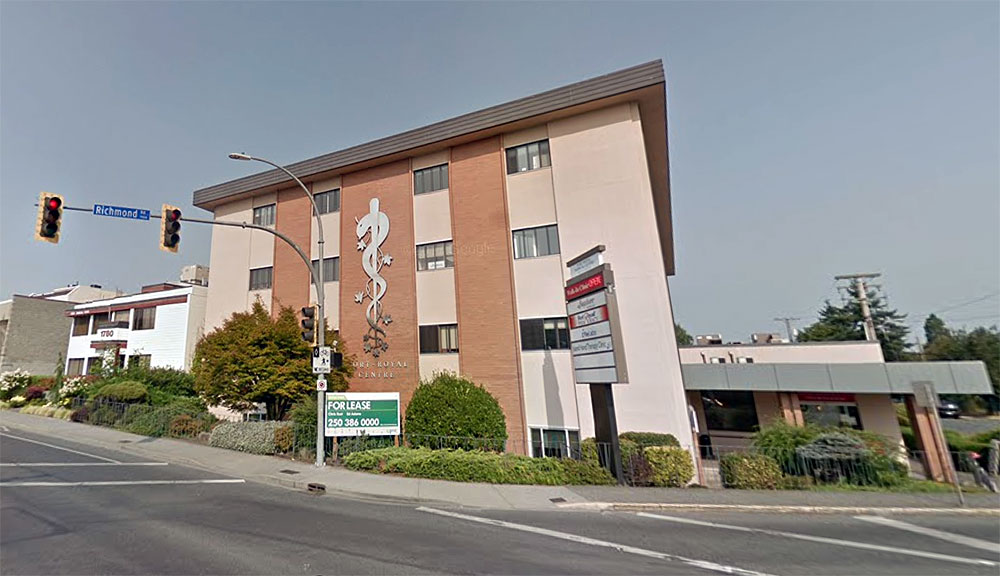