An artist's rendering of Johnson Street Gateway's sixth design revision in eight years. The proposal, eyed for the foot of Johnson Street at Wharf Street, was pulled from this morning's council meeting following a discrepancy between the Victoria Downtown Residents Association's respoonse to a community meeting held with developer Reliance Properties and a recent non-support letter submitted to Victoria councillors.  Reliance Properties

commercial, condos, Downtown Victoria
Developer pulls Northern Junk proposal from council meeting; further community consultation planned
MIKE KOZAKOWSKI, CITIFIED.CA
Reliance Properties has pulled its Wharf Street development proposal from this morning’s Committee of the Whole meeting following a discrepancy between a neighbourhood association meeting and a subsequent non-support letter submitted to council, Citified has learned.
Developer Jon Stovell says his company’s latest design for a mixed-used use condominium and retail project at the foot of Johnson Street along Wharf Street, dubbed Johnson Street Gateway, met with support from the Victoria Downtown Residents Association (DRA) but the group retracted its position on September 29th.
“The [Downtown Residents Association] came in with a late letter (non-support) inconsistent with the meeting we had with them (support),” Stovell wrote to Citified.
In its letter to the City, the DRA cited concerns over the sale of a City of Victoria-owned parcel of land to the developer should a successful rezoning be achieved.
DRA Chair Ian Sutherland wrote that the "sale of public property on the Victoria Harbour front (sic) for private development in the form as proposed would appear to be not in the public interest."
Despite ample public plazas and spaces having been created as part of the nearby Johnson Street Bridge project and Reeson Park's immediate proximity to Stovell's proposal, Sutherland cited concerns that the pace of development in downtown Victoria is affecting the public realm.
"Rapid densification that the downtown is currently experiencing highlights the deficit of much needed public space in the area," he wrote.
Sutherland further noted that the Association's overall position on the site's redevelopment is "not focussed on this application in particular but reflect[s] the concerns about the overall direction being taken by Staff and Council in dealing with development applications in Downtown in general and Old Town in particular."
Now eight years into its municipal approvals process, the Johnson Street Gateway project – which will encompass the restoration of the Northern Junk heritage buildings overlooking Victoria’s Inner Harbour – has been redesigned six times with various building heights, footprints and exterior materials. Even architectural firms have changed.
The latest design, rising to eight-storeys and featuring 103 residences, was envisioned by architectural firm DIALOG. Its angled massing yields a different building profile from varying vantage points and centres its largest façades along the harbour and Johnson Street.
Stovell says the project will re-appear before council but not before voters have had a chance to partake in this month’s municipal election.
“It is better to have the same council refer and conduct the public hearing. Staff is totally supportive, and we hope to be back to Committee of the Whole shortly after the election.” C
Receive Citified's timely real-estate news straight to your inbox. Sign up for our newsletter. 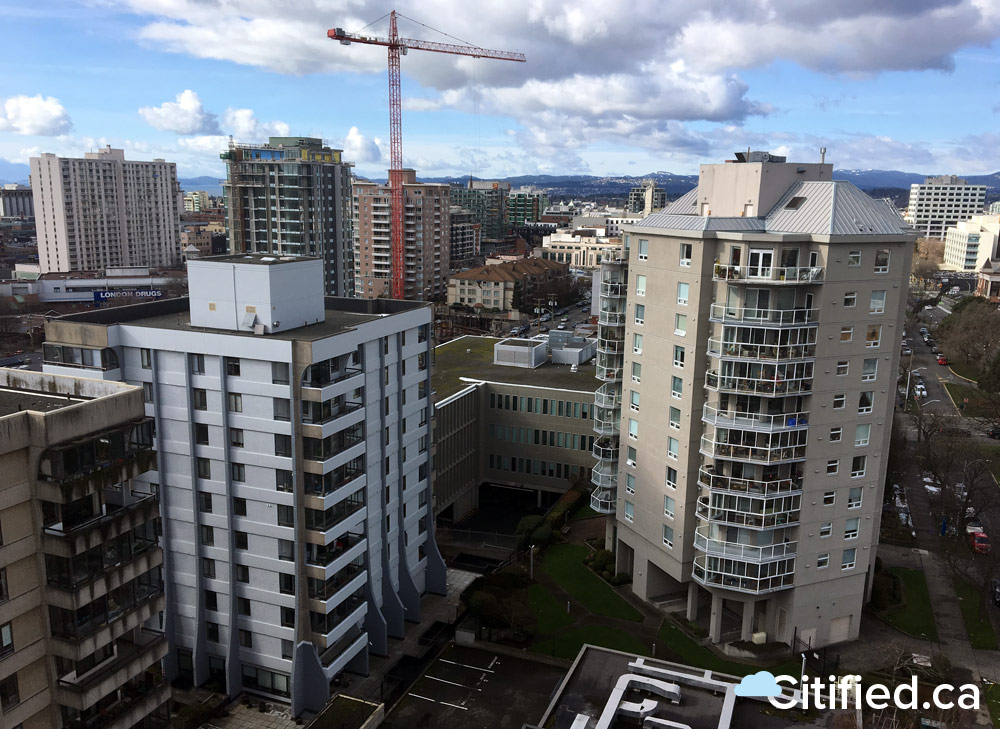