An artist's rendering of Hudson Place One, a proposed 29-storey condominium tower with ground floor retail space planned for the 700-block of Herald Street. If approved, the building will stand as Vancouver Island's tallest. The rendering as depicted is an early design that will be further refined, according to development firm Townline.  Townline

commercial, condos, Downtown Victoria
Details of Victoria's tallest building revealed at Hudson District block party
MIKE KOZAKOWSKI, CITIFIED.CA
Downtown Victoria’s Hudson District was abuzz with activity on Thursday evening as development firm Townline held a block party at the Victoria Public Market in celebration of the burgeoning community.
As part of an address by Justin Filuk – Townline’s director of development – the company expressed its gratitude to the residents and retail tenants of the Hudson District, and took the opportunity to highlight Townline’s milestones in Victoria.
“We are here today because each and every one of you is helping to make the Hudson District a thriving and healthy community,” Filuk said. “And we are excited to confirm that we will be submitting for development permit in early July for the first phase of Hudson Place which we hope will become one of the City’s most exciting buildings.”
With excavation for Hudson Place underway since May, Filuk went on to update residents on the status of the preparatory work on Townline’s vision for the culmination of the Hudson District.
Speaking to Citified on the inspiration behind the two towers set to rise above the north end of downtown Victoria, Filuk expanded on Townline’s decision to pursue a design approach that would redistribute the District’s approved density in a more visually appealing way.
Filuk also confirmed the site of the taller of the two towers, Hudson Place One, currently allows a floor space ratio of 7.47-to-one and a height of 24-storeys, which works out to approximately 360,000 square feet of usable space. That density, Filuk says, was allotted a decade ago when Townline secured municipal approvals to redevelop the Hudson’s Bay Company (HBC) property bordered by Douglas, Fisgard, Blanshard and Herald streets.
“While working on the massing model concepts for the project, we realized that by pushing the floor count of Hudson Place One just above our 24-storey permitted height, we could pursue a refined architectural statement and improve the building at the ground plane by keeping floor plates to within the City’s guidelines,” Filuk says.
By the numbers, the block party reveal confirms approvals are being sought to build Hudson Place One (destined to rise along the 700-block of Herald Street) to a height of 29-storeys with approximately 180-units of condominiums and a ground floor retail component. Hudson Place Two, fronting onto Blanshard Street at Fisgard Street, is being envisioned as a mixed-use building possibly with an office component. Townline plans to further refine the shorter tower’s design and submit for development permits by mid-2018.
Townline’s development history in Victoria stems back to 2006 when developer Rick Ilich began the restoration of the former HBC department store and a conversion from a retail usage to a mixed-use residential and commercial building. In exchange for the undertaking the City of Victoria granted approvals for three towers rising to 24, 18 and 12-storeys. Completing the restoration of the The Hudson (the moniker for the restored HBC building) in 2009, Townline subsequently moved on the shortest of the three towers and built 120 rental apartments at Hudson Mews, a 12-storey complex along Fisgard Street.
Expanding the District one block north to Caledonia Avenue through an acquisition of formerly stalled development sites, two more purpose-built rental towers were completed: the 16-storey Hudson Walk One with 178 residences and the 15-storey, 106-unit Hudson Walk Two which is only weeks away from occupancy.
“Our goal throughout the last decade has been to build community and to create a desirable urban neighbourhood,” Filuk says. “When we started all of those years ago, the north end of downtown was literally the fringe. Today when you talk to local residents and business owners they view this part of town as the stepping stone to a thriving mixed-use future for lands all the way to Hillside Avenue, and there’s tangible excitement around such a prospect for growth and urban renewal.”
With a public dog run, children’s play park and a brewpub due to open this year at the District, Filuk is optimistic the City of Victoria will be receptive to his company’s decade-long commitment to the downtown core and see beyond height for the final two towers. C

10-storey condo proposed across the street from Our Place 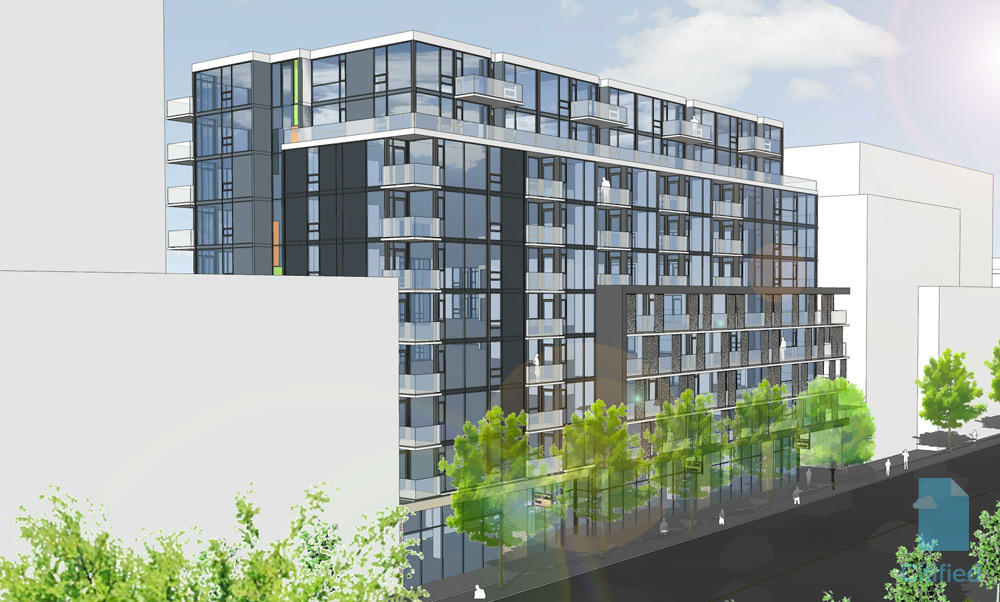