An artist's rendering of a 15-storey development concept for Colwood Lodge, a property which is currently occupied by an outdated 50-unit woodframed affordable rental at 85 Belmont Road. Cascadia Architects/Greater Victoria Housing Society

rentals, West Shore
Colwood Lodge redevelopment could yield 15-storey affordable rental tower at Colwood Corners
MIKE KOZAKOWSKI, CITIFIED.CA
The Greater Victoria Housing Society (GVHS) has unveiled updated plans for the redevelopment of its Colwood Lodge affordable housing complex at 85 Belmont Road and 1901 Jerome Road in Colwood on Victoria’s Westshore.
Rising to 15-storeys, the new proposal could yield approximately 100 residential units and effectively double the 40-year-old Colwood Lodge’s 50 residences.
GVHS’ decision to forgo an earlier plan – a six-storey, nearly 140-unit building – stemmed from opportunities to lower the project’s environmental footprint.
“Ultimately, the decision to design a mass timber tower stemmed from costing, land use, and environmental implications,” says Kaye Melliship, GVHS’ Executive Director. “The building will be designed to the highest level of the BC Energy Step Code (Net-Zero ready) and will provide much needed affordable rental housing for seniors and families in the City of Colwood.”
In lieu of providing underground parking as was the earlier intention, the updated design will feature a surface parking lot earmarked for future development.
The project will also include a 180-stall outdoor bicycle pavilion considering the project’s proximity to the Galloping Goose Regional Trail which runs along Belmont Road.
“The building design borders two streets, with a simple extrusion and articulation at the base and the top. The bike pavilion and canopies projecting from the base levels, will be designed to engage with the street on a smaller scale, providing an active and welcoming ground plane condition,” said Peter Johannknecht, principal of the project’s architectural design firm, Cascadia Architects.
At a height of 15-storeys and 51.7 meters, the tower will stand as the tallest mass timber-designed building on Vancouver Island, eclipsing Aryze Development’s and Mike Geric Construction’s 14-storey Speed Avenue proposal (at 45.5 meters in height) and superseding Standing Stone Development’s 12-storey Corvette Landing tower on Admirals Road. It will also match the floor count of another proposal that was recently unveiled on the Westshore (albeit a concrete tower, not a mass timber design) as a 15-storey residential building along the 500-block of Goldstream Avenue a short distance from GVHS' Belmont Road site.
The proposal is GVHS’s second affordable housing project in the Colwood Corners area and one of several recently completed or in the planning stages at the hands of other housing providers.
Along the 300-block of Goldstream Avenue in Langford, GVHS is currently constructing a six-storey, 102-unit apartment that will feature studio, one, two and three-bedroom suites. The building is a stone’s throw from the recently completed four-storey 550 Goldstream Avenue complex (with 36 affordable rentals) by M'akola Development Services and the first phase of Oak Park, Pacifica Housing’s 73-unit affordable rental recently completed along the 600-block. Oak Park will also include a second phase featuring 80 homes.
Along the Old Island Highway Pacifica Housing just wrapped up construction of Helios, an 82-unit affordable rental situated opposite the entrance to Royal Roads University.
And earlier this year the province announced funding for a 124-unit affordable apartment building at 342 Wale Road (now underway) on a site formerly eyed for a 23-storey highrise tower. Its one, two and three-bedroom units will be earmarked for First Nations singles and families. Meanwhile the Capital Region Housing Corporation recently embarked on a six-storey, 130-unit affordable rental along the 2700-block of Spencer Road.
GVHS has submitted its plans to the City of Colwood and is awaiting feedback from the municipality. No construction timelines have been confirmed at this time. C
Receive Citified's timely real-estate news straight to your inbox. Sign up for our newsletter. 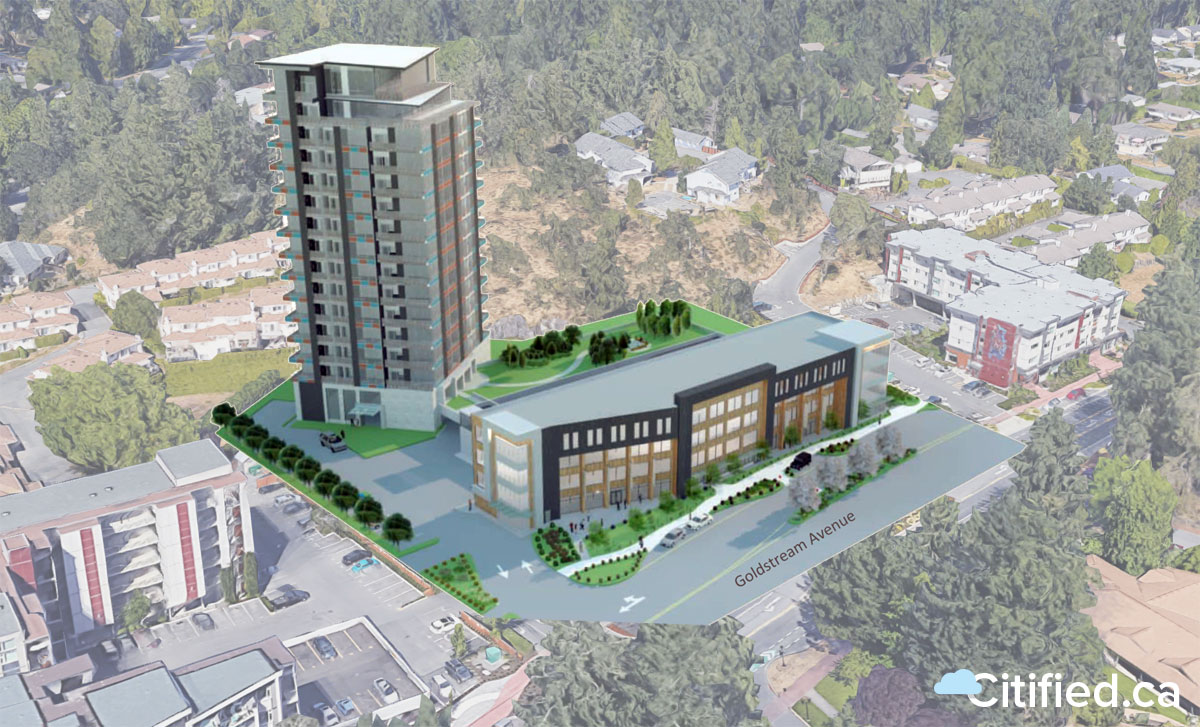