An artist's rendering of Hudson Place One, a 29-storey condominium tower planned for the 700-block of Herald Street in downtown Victoria. If built as proposed, the building will become the tallest building on Vancouver Island.  Townline

commercial, condos, Downtown Victoria
29-storey tower eyed for downtown Victoria could become Vancouver Island's tallest building
MIKE KOZAKOWSKI, CITIFIED.CA
The design of what could become Vancouver Island’s tallest building has been revealed in planning documents submitted to the City of Victoria by development firm Townline.
Envisioned at 29-storeys tall, the Hudson Place One condominium and ground floor retail tower is eyed for the 700-block of Herald Street in downtown Victoria’s Hudson District, a mixed-use condominium, rental apartment and retail community developed by Townline on lands formerly occupied by a Hudson’s Bay Company (HBC) department store.
Although the building has received zoning approval to a maximum height of 72 metres or approximately 24-storeys – a would-be tallest building in Victoria – the developer has opted to redistribute some of the approved residential density through height rather than situating more units in lower levels and the building's podium. The number of residences will remain unchanged at 178.
The tower's design utilizes ladder-like horizontal features and a series of setbacks along its 84.8-metre height to create a visual presence that emphasizes familiarity to nearby buildings while lattice-covered open spaces at the penthouse levels render a dramatic effect on the city skyline. The use of shrubs and trees along the building exterior and atop the roof will introduce architectural statements to Victoria that have been popularized in cities around the world.
Planning documents depict the tower's suite layouts will range from 477 square foot studios to expansive penthouses affording just under 1,900 square feet of living space. Five levels of underground parking will accommodate approximately 250 vehicles. A single retail unit will front onto the carriageway at the rear of the Victoria Public Market in the Hudson building.
Townline’s development history in Victoria stems back to 2006 when developer Rick Ilich began the restoration of the former HBC department store and its conversion from a retail usage to a mixed-use residential and commercial building. In exchange for the undertaking the City of Victoria granted approvals for three towers rising to 24, 18 and 12-storeys. Completing the restoration of the The Hudson (the moniker for the restored HBC building) in 2009, Townline subsequently moved on the shortest of the three towers and built 120 rental apartments at Hudson Mews, a 12-storey complex along Fisgard Street.
Expanding the District one block north to Caledonia Avenue through an acquisition of formerly stalled development sites, two more purpose-built rental towers were completed: the 16-storey Hudson Walk One with 178 residences and the 15-storey, 106-unit Hudson Walk Two.
Townline intends to submit for municipal permits on the second phase of Hudson Place, expected to contain a mix of retail spaces, residences and a public parking component, in 2018. Phase 2, which could rise to 17-storeys, will be complimentary in design to Hudson Place One and will place a key focus on the development of an enhanced pedestrian experience along Blanshard Street.
Citified has reached out to Townline’s director of development for Victoria, Justin Filuk, who has agreed to discuss the architectural design rationale for Hudson Place. Look for a synopsis of this discussion in an upcoming article. C 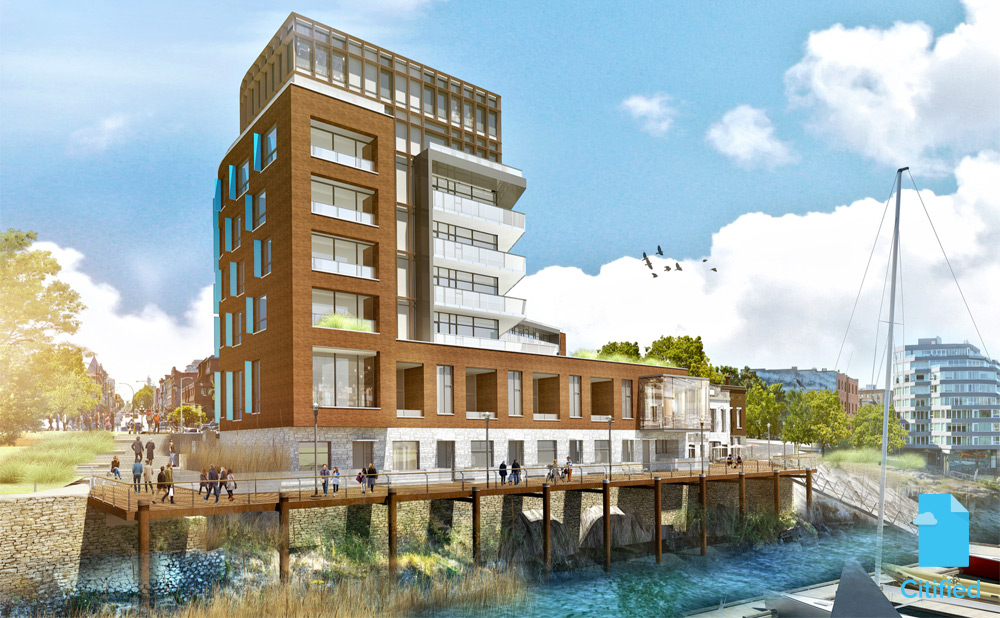