commercial, condos
15-storey condominium tower envisioned for Pluto's Diner property at Cook and View streets
MIKE KOZAKOWSKI, CITIFIED.CA
Sakura Developments has submitted plans to the City of Victoria to redevelop a Harris Green property home to Pluto’s Diner at 1150 Cook Street.
The proponent, along with a firm identified as 66 Developments Ltd., has envisioned a 15-storey condominium tower comprised of 129 residential units and retail spaces with frontage onto Cook and View streets.
The make-up of the residences will span from studios to two-bedroom suites numbered at four, 99 and 26-units, respectively.
As part of the project’s public realm component, the developer hopes to include a public plaza on the northeast corner of the property kitty-corner from an upcoming Volvo showroom set to assume a commercial property recently vacated by an Audi dealership.
Project architect NSDA Architects, a Vancouver-based firm, describes the tower’s design as “composed of three distinct elements: a ground level commercial base, a two-storey residential podium and a twelve-storey residential tower above. The three lower levels combine to form the primary street wall [12 meters] high along Cook Street, matching the height of the [three-storey] office building to the south and the [three-storey] apartment building across Front Street.”
The juxtaposition of the streetwall to the building’s slimmer vertical shaft (rising to 45 meters), the architect says, will establish the property as a landmark presence on the border of Harris Green and Fernwood.
Parking will be in the form of an underground parkade accommodating 41 vehicles.
With the proposal in its infancy, the municipal process is expected to carry through into 2020 with the potential for approvals later that year or in 2021. Construction would proceed at some point thereafter, if the project receives the green light.
Brun Dahlquist, owner and operator of Pluto’s Diner, earlier this year confirmed the eatery’s lease expires in April of 2020 and will usher in the end of Pluto’s operations from within its iconic converted mid-20th century service station.
However, artist’s renderings depicting the design of Sakura and 66 Development’s project include a logo for Pluto’s within the tower’s ground floor commercial space, hinting at the potential for the eatery’s return within the newly built project.
1150 Cook Street is one of several projects within its immediate vicinity and the most recent addition to a growing list of redevelopments along View Street.
Just a stone's throw from the 1100-block Cook Street and 1000-block View Street development site Mosaic Properties Inc. recently received occupancy for The Jukebox, a 215-suite, nine-storey condominium on View Street at Vancouver Street down the block from Pluto's. One block west of The Jukebox (900-block) Nelson Investments Inc. is pursuing approvals for a 15-storey rental tower with 255-units. Backing on to Nelson Investments' property is another project by Sakura Developments, a recently approved 62-unit, 12-storey condominium tower with frontage onto Fort Street. Further west in the 800-block four residential towers now stand over the street, the most recent of which is a 15-storey rental complex with 209 homes completed in 2018. C
Receive Citified's timely real-estate news straight to your inbox. Sign up for our newsletter. 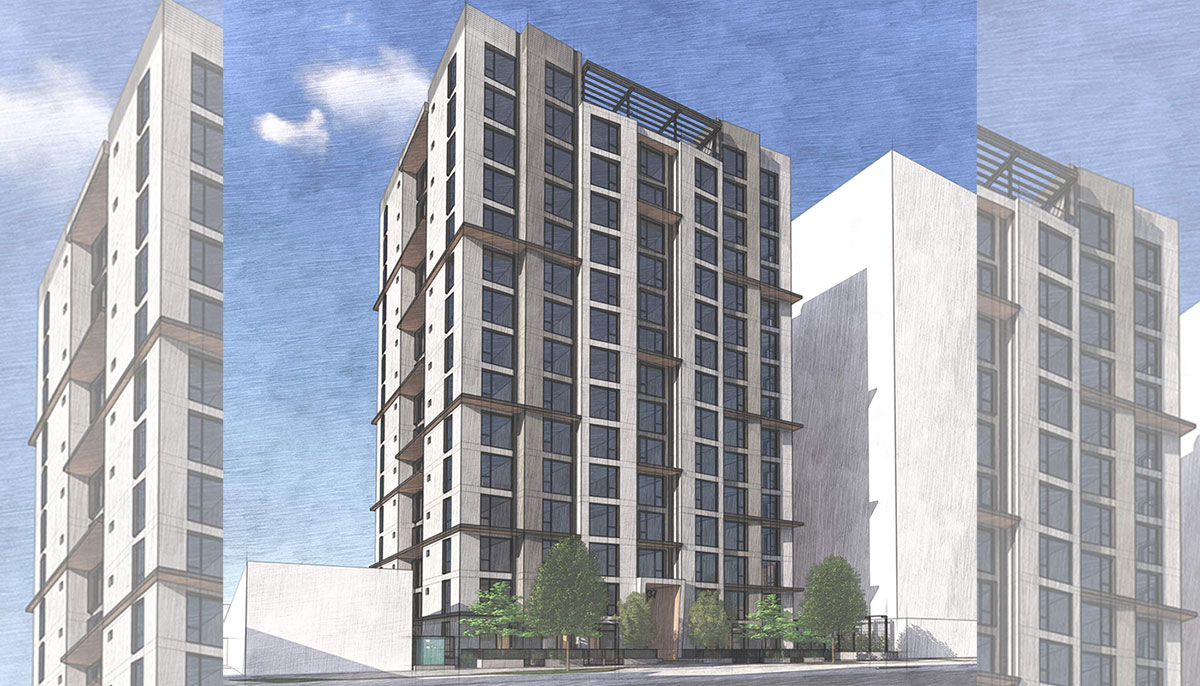