A series of informative panels describing the history of the Customs House property in downtown Victoria, and notable events that occurred in its immediate area since the late 1800's, have been installed at the 816 Government Street construction site. Citified.ca

commercial, condos, Downtown Victoria
"Art gallery under the stars" tells of storied history at site of Victoria's luxury Customs House condo development
MIKE KOZAKOWSKI, CITIFIED.CA
The builders at downtown Victoria’s most prominent construction site have unveiled a series of informative panels to contextualize the history of an architectural landmark undergoing a monumental transformation.
The merging of Old World architectural opulence with timeless modern design has become a focal point for millions of visitors who’ve encountered Cielo Properties’ Customs House luxury condominium project – rising along the 800-block of Government Street at the nexus of Victoria’s Legislative precinct and the Wharf Street harbourfront – centred on the restoration of a century-old sandstone façade regarded as an exemplary piece of the Capital’s built form.
“The Customs House, erected in 1914, is as important to Victoria’s urban fabric and its international image as the Smith Building is to Seattle or the Marine Building is to Vancouver,” said Craig Anderson, director of marketing and sales of Vancouver-based real-estate marketing firm Magnum Projects.
“Victoria’s Inner Harbour, as part of a visual familiar to so many from around the world, is comprised of the Legislature, the Empress Hotel, the Belmont Building and Customs House. These landmarks represent a timeless, and perhaps even a priceless, story of culture and history of one of the most prominent cities in North America. And that story is now adorned around the construction site to involve passersby in the history being made by Cielo Properties and Banyan Construction.”
On Friday, June 21, crews began installing a series of eleven street-side panels describing the land and its immediate area’s transformation over the span of several generations. From the construction of the Inner Harbour’s causeway, to changes and additions to the Customs House building, to information on the extensive façade retention and restoration efforts undertaken by the project team, the historical walk is a well-researched public information resource not to be missed.
“We’ve approached this installation as though it were an art gallery under the stars,” Anderson says. “Beautiful visuals accompanied by texts will be educational to both locals and visitors alike, and undoubtedly they'll encourage many photo opportunities that will depict the construction site in its present-day form juxtaposed with what the future for the property holds, and its history.”
Customs House recently made headlines when its penthouse suite sold for a record-breaking $10.8 million, forever changing the lens through which Victoria’s luxury residential properties are perceived.
And it’s that level of investment by purchasers, says developer Stan Sipos, that has driven his organization’s ability to pursue a heritage retention effort at the scale and with the level of investment necessary to deliver a world class finished product.
“Heritage retention and restoration is one of the most difficult pursuits in the real-estate development field, but the outcomes, when done well, create legacies for generations to come and reflect a community’s commitment to history preservation.”
Customs House is not only a record-breaking project in terms of leading valuations for its luxury offerings, it epitomizes a recognition that heritage preservation is a pursuit made possible by visionaries who have not only made an investment in their future home, but one for all Victorians. Of the 57 residences, Sipos says, only ten remain available.
Built 105-years-ago, Customs House was constructed on the former foundation of the City of Victoria’s 1898 post office at Wharf and Government streets overlooking the Inner Harbour. In the 1950’s a post-modern wing rose along Government Street.
In 2010 Cielo Properties acquired the complex from the federal government with plans to retain the heritage façade of the historic wing while replacing the mid-century addition with a seven-storey lowrise tower.
The mid-century addition has since been demolished and construction on the new structure has begun while the façade of the heritage wing has been successfully retained and is being re-purposed into the project. The complicated heritage retention work began in 2016 while excavation for a three-storey underground parkade started in the fall of 2018. Completion is slated for the spring of 2020.
A scale model of the completed building is on display at Customs House’s presentation centre just around the corner from the construction site at 955 Wharf Street. For presentation centre hours, please connect with the sales team at 250-590-9881 or by writing to info@customshouse.ca. C
Receive Citified's timely real-estate news straight to your inbox. Sign up for our newsletter. 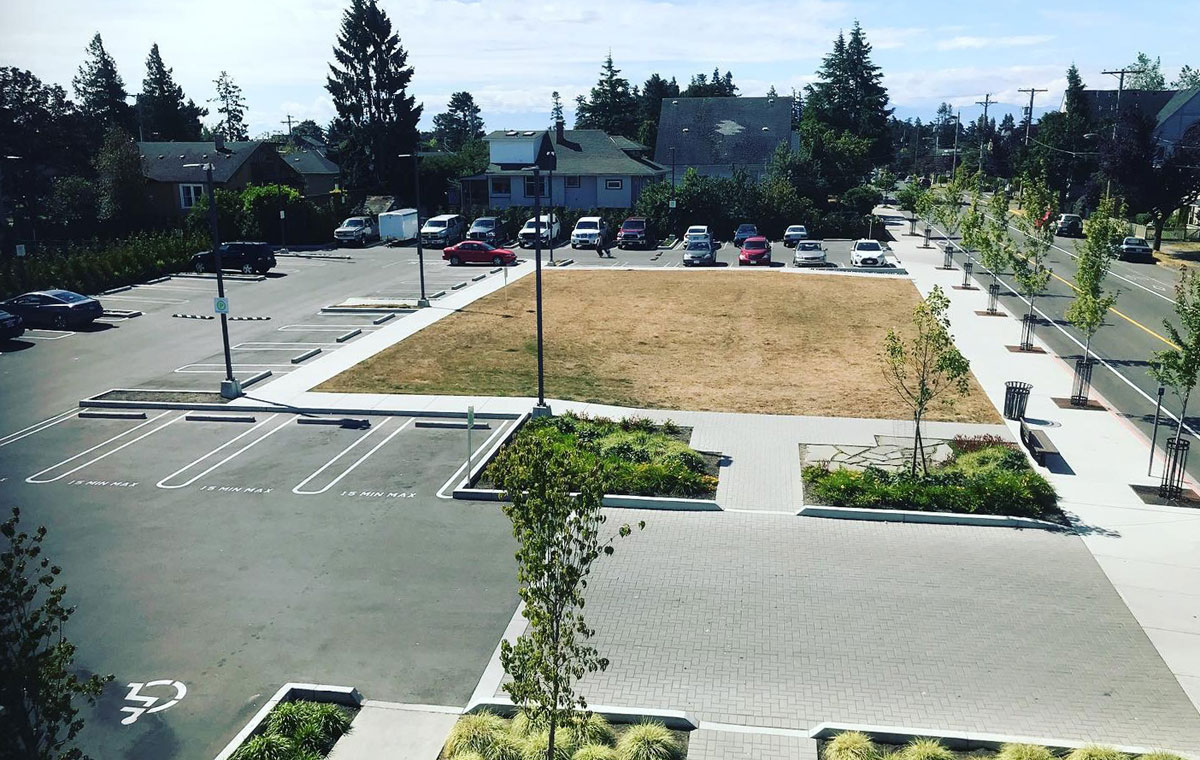 The Cedars at Roundabout Square