A micro-rental apartment concept, with suites sized between 210 and 320 square feet, has been proposed for the 700-bock of Princess Avenue.  Large & Co.

commercial, rentals, Urban core
'Work-live' micro-rentals pitched for surface parking lot north of downtown Victoria
CITIFIED.CA STAFF
A 75-unit micro-rental development has been proposed for the 700-block of Princess Avenue in Victoria’s Burnside-Gorge neighbourhood north of the city’s downtown core.
Dubbed Seven-36, the six-storey, woodframe residence will feature furnished micro-sized rental apartments with layouts between 210 and 320 square feet. Units will include small kitchen areas.
Described as ‘workforce work-live’ residences, tenants of the building will share a 3,000 square foot amenity area on the building’s main floor that features a full kitchen, an entertainment zone with televisions and games, quiet and communal seating areas, and an outdoor patio with a barbecue. In addition to amenities for residents, a ground floor coffee shop will front onto Princess Avenue.
Victoria-based developer Large & Co. plans to include upwards of 17 electric vehicles and an electric bicycle fleet within the building’s single underground level. The vehicles and bicycles would be made available to residents.
Large & Co.’s original proposal for the site included 25 near-shelter housing units managed by Victoria’s Cool Aid Society. That aspect of the project was dropped following community consultation sessions.
Large & Co.’s rezoning proposal will go before council later this year. Pending municipal approvals, construction is expected to get underway next year with completion in 2019. C 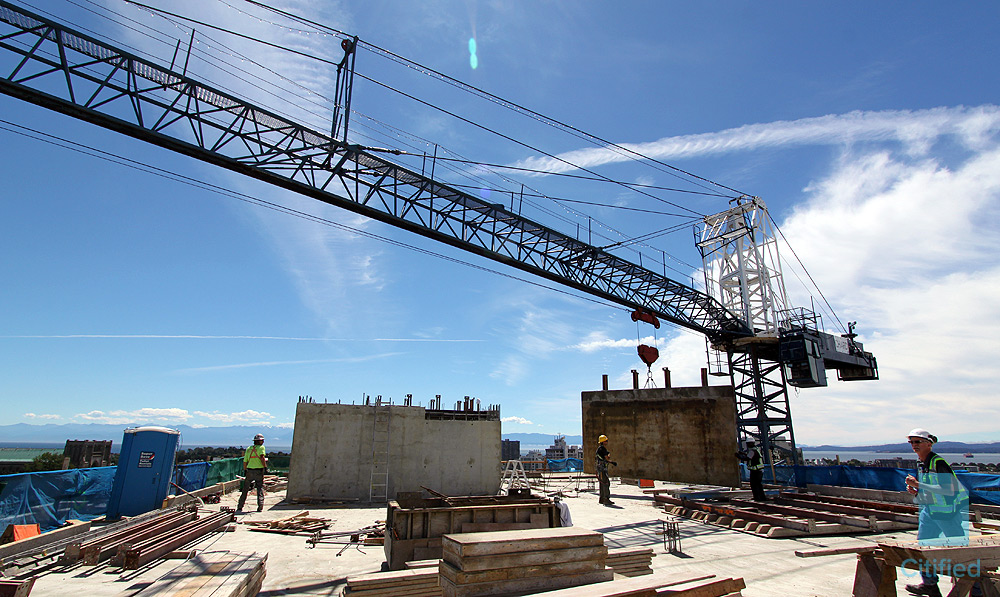