With the assistance of a construction crane, workers put the finishing touches on the roof of the 15-storey Yello on Yates rental tower spanning the 800-blocks of Yates and View streets. A 'topping-out' ceremony for the project was held on Wednesday, July 26.  Citified.ca

commercial, rentals, Downtown Victoria
Chard Development celebrates 'topping-out' ceremony for 15-storey Yello rental tower
MIKE KOZAKOWSKI, CITIFIED.CA
On Wednesday afternoon Chard Development celebrated a 'topping-out' ceremony for the firm’s first purpose-built rental complex in downtown Victoria.
The 209-unit, 15-storey Yello on Yates tower spanning the 800-blocks of Yates and View streets has been underway since last year and is expected to welcome residents to its one and two-bedroom suites by early 2018.
Speaking to a crowd of construction crews, project consultants and local politicians, developer Dave Chard said Yello represents a housing option integral to Victoria’s housing supply.
“For an economy to be healthy, you have to come out with a diverse range of housing types, and hopefully that’s what we’re doing [with Yello],” Chard said, adding that his projects have spanned the housing affordability spectrum and a future condominium residence will be specifically targeting middle income earners.
Mayor Lisa Helps, who attended the event as an honorary guest, thanked the development team for delivering a purpose-built rental tower in the city centre and spoke of the positive spin-off effects of more residents living in the downtown core.
“To have this quality of rental building built in our downtown is a real testimony to the future of Victoria,” Helps said. “We’re going to have hundreds of people living up here who will be shopping downtown, who will be going out to eat downtown, who will be making downtown their play room, their backyard.”
As part of Yello’s topping-out ceremony, Mayor Helps and developer Chard, together with the assistance from a Realstar Group representative (the firm that will own and operate Yello upon completion) poured the ceremonious last bucket of concrete atop the building’s roof. The trio worked to level out the concrete pour before a contingent of Kinetic Construction bosses and photographers.
Chard Development is one of downtown Victoria’s most prolific real-estate development firms, having completed a number of mixed-use residential and commercial projects spanning back to 2006. The company’s most recent development, an 84-unit, 10-storey low-rise concrete tower in the 800-block of Broughton Street, welcomed residents earlier this summer. Chard’s upcoming developments be in the form of two 20-storey residential towers, one of which, dubbed Yates on Yates, is currently in the pre-sales stage.
Currently under construction in downtown Victoria are 527-units of rental housing, while 948 are in planning, according to Citified's real-time data. Throughout the region over 2,300 purpose-built rental residences are underway. C 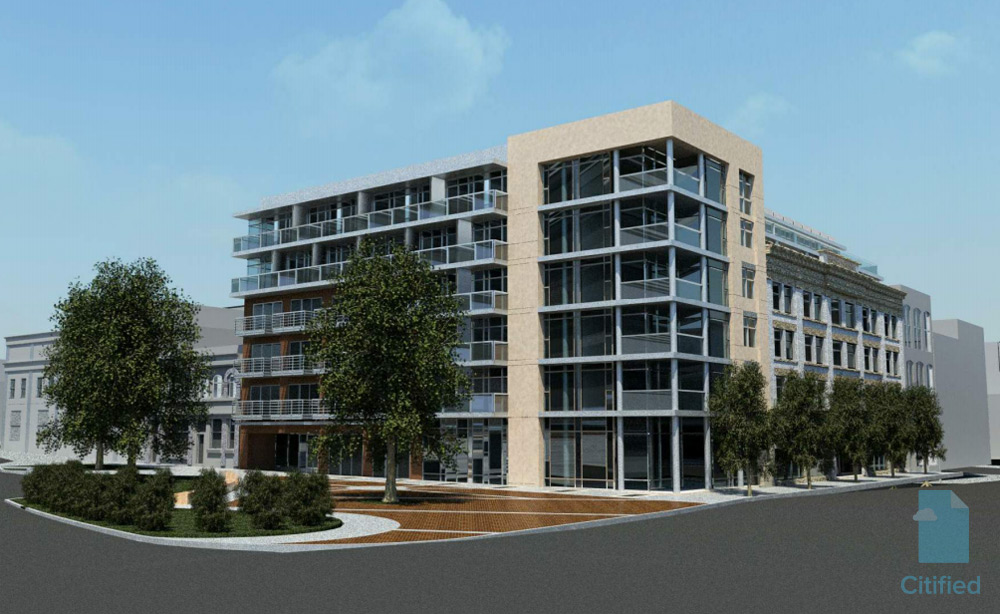