Artist's rendering of 212-220 Cook Street, a five-storey mixed-use rental, condo and commercial development proposed for Victoria's Cook Street Village. The project will include 17 rental units, nine of which will be available at below-market rates, and 36 condo residences. A single commercial space will front onto Cook Street.  Urban Core Ventures

commercial, condos, rentals, Urban core
Public hearing scheduled for mixed-use Cook Street Village development
MIKE KOZAKOWSKI, CITIFIED.CA
A December 8th public hearing has been set for a mixed-use rental, condo and ground floor commercial development planned at the south end of Cook Street Village.
The five-storey, 53-unit low-rise envisioned for 212-220 Cook Street will include 17 rental apartments – nine of which will be available at 10% below market value – 31 condo residences with several available as live-work lofts along the ground floor, and a single retail space fronting onto Cook Street.
Developer Leonard Cole of Victoria-based Urban Core Ventures says the project, in planning since 2014, is destined to become a landmark in the village and serve as an example of Victoria’s new planning guidelines.
“We’ve spent the last two-and-a-half years working with the City of Victoria’s planning department to arrive at a proposal that has met the City’s expectations in every way. Throughout the municipal planning process we also invested heavily into a community engagement strategy that made a tremendous difference in our architectural design efforts, the make-up of our units and helped solidify the building’s role as a destination in the Village,” Cole said.
Bridging the planning department’s requirements with resident’s expectations was not always an easy task, Cole says, noting that the project’s proposal phase was as much an exercise in community relations as it was about creating a suitable concept fitting of its high-profile location.
“When you’re the first developer to adopt newly introduced development guidelines in a neighbourhood, as was the case with this project, you must be prepared to mitigate concerns from the community, assume nothing and allow the planning process to guide you to the final product. If you come in with expectations and rely solely on what you feel is right versus what you feel is wrong, you’ll end up disappointed.”
Cole admits, however, that his biggest obstacle in the run-up to the public hearing was a coordinated misinformation campaign propagated by anonymous members of the public opposed to Victoria’s new development guidelines.
“We were targeted and remain targeted by a group of anonymous individuals who appear unhappy with densification and the City’s development expectations at village centres,” Cole said.
At 212-220 Cook Street’s first Committee of the Whole meeting held last July, Victoria Mayor Lisa Helps expressed concern about anonymous materials circulated throughout Fairfield that appeared to purposefully misrepresent the nature of the project to area residents.
“This piece of paper that’s been circulated to a number of residents in the neighbourhood, [titled] ‘Is this Cook Street Village of the future,’ and there’s a picture of what looks like downtown, and it says that [Urban Core Venture’s proposal] is contrary to all existing community plans. [The proposal] is actually in compliance with the community plan, [although] you might not like the community plan. [And] in the interest of transparency …let people know who you are,” Helps said.
Reinforcing the mayor’s message, an independent report commissioned by the City of Victoria to assess the suitability of the City’s community plans has identified projects identical in massing and scope to Cole’s as ideally suited to Victoria’s urban villages. The report outlines four storeys are no longer economically viable, given real-estate values in desired neighbourhoods like Fairfield.
Despite the turbulent aspects of the planning and community engagement processes, Cole maintains he’s elated over his team’s achievements.
“Community feedback ultimately helped us arrive at a design we are all proud of, and one that meets the needs of the neighbourhood, is responsive to the housing situation in our community, and upholds the values of the official community plan,” Cole says, adding that “real-estate development is a demanding profession, but at the end of the day it’s gratifying to know that you’ve done your best, that your proposal has strong support from planning staff, and that one day your vision may become a landmark in one of the most cherished neighbourhoods in the region.”
The public hearing is scheduled for 6:30PM on December 8th at Victoria City Hall’s council chamber. Members of the public are encouraged to write mayor and council with their opinions regarding the proposal by clicking here. C

Downtown Victoria on track to lose 1,500 public parking stalls by 2020 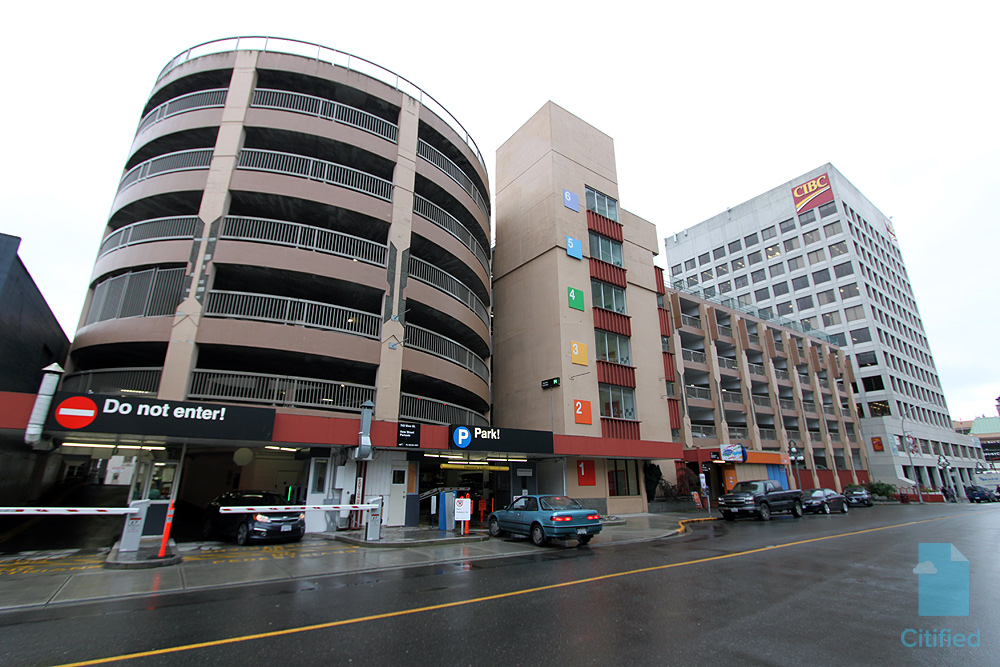