A rendering of Telus Ocean, proposed for 767 Douglas Street at Humboldt Street in downtown Victoria. The office tower is planned to rise as the Capital's most environmentally-forward development, ever, and is seen as a catalyst for attracting high-profile technology companies to Victoria's downtown core.  Aryze Developments/Telus Communications

commercial, offices, Downtown Victoria
Plans for downtown Victoria's $100 million Telus Ocean tower tweaked as approvals process continues
MIKE KOZAKOWSKI, CITIFIED.CA
Downtown Victoria’s $100 million Telus Ocean proposal has undergone several design changes as developers Telus Communications and Victoria-based Aryze Developments pursue approvals for their 11-storey complex touted as the Capital’s most environmentally sustainable construction project.
Envisioned for the City of Victoria’s ‘Apex Lot’ on Douglas Street at Humboldt Street, Telus Ocean is described by its proponents as a future “beacon” for the south end of downtown, with an iceberg-like glass-clad dominance amid a mosaic of varying architectural styles, heritage buildings and uses.
Revealed last August as part of a formal application before the City, Telus, Aryze and Toronto-based Diamond Schmitt Architects have revised their plans following consultation with local residents and business owners, and engagement with civic planners.
“The tweaks to the project are in response to feedback we’ve heard from the community, planning staff and local stakeholders,” said Luke Mari, partner at Aryze Developments. “It’s about a balancing of interests, as every building around the site has a different expectation, so changes we make to satisfy one building’s concerns have to be balanced out with those of a neighbouring property.”
Chief among the revisions is the relocation of Telus’ logo along the tower’s Douglas Street frontage from the apex of the building to just above street level, and an increase in the usage of opaque spandrel panels at the corner of Humboldt and Penwell streets where the proposal backs onto residential and hotel highrises. Improvements to glazing and the addition of solar shades will lower cooling demands in summer months, while a special glass film only visible to birds will be used adjacent to exterior flora to reduce the appeal of interior spaces as perches.
In terms of massing and height, Mari says City staff have expressed support for an even taller building than the 53 meter design currently before planners, and the Downtown Core Area Plan calls for more massing than is being proposed.
“Our goal has been to create an iconic building for an iconic site, to deliver a landmark predicated upon a deviation from the norm, but not to max out allowable building area or height simply for the sake of doing so,” Mari says. “Being that this is an office building, the scale and proportions are designed to meet the needs of an office environment; floor plates tend to get too small as you rise taller and slimmer, which works against the needs of future tenants.”
On the environmental front, the project will adhere to Canada Green Building Council's Zero Carbon Building Program, a Leed version 4 Platinum target, a Well Building Standard core and shell, Salmon Safe BC standards, and exceed BC's new Step Code 3 building code, the highest standard for office buildings.
To the passive observer, Mari posits, Telus Ocean may be just another office tower among dozens of office buildings in downtown Victoria. But the symbolism of the undertaking and its environmental stewardship are part of a broader agenda materializing at the municipal level as Victoria builds out from the economic challenges of COVID-19 and adheres to a changing landscape where technology, unique economic niches and a coastal advantage will play greater roles in the region’s future.
“We hear so much about the need for city resiliency, living wage job creation, job security and the importance of pursuing Victoria’s untapped potential, and that’s what Telus Ocean is about, to bring a long-term, sustainable level of investment to Victoria amid rapidly changing economic and employment realities,” Mari says. “There are multi-billion dollar technology companies searching for iconic office space in Victoria, and without projects of this calibre we have nothing to offer them. The implications of world-class design, and world-class opportunity, are critical for the south Island in these times of transition and for generations to come.”
Telus Ocean’s make-up will include two levels occupied by Telus as a regional headquarters, with six-storeys available to third-party tenants. The two uppermost levels on floors nine and ten will be comprised of community event spaces available to local groups and organizations, and tenant amenity areas. A rooftop space on what will technically be the 11th floor will also be available as an amenity.
As reported by Citified in April of 2017, TELUS had been actively seeking a suitable development site for a modern Victoria headquarters for some time, with concepts having been submitted by several local builders in an effort to woo the company to their development sites or mixed-use projects.
In early 2017, the organization participated in a design competition for a City of Victoria-owned parcel at 767 Douglas Street known as the Apex Site, or as the Budget lot. The property had been eyed by the municipality as a suitable land disposition opportunity, and drew six submissions from developers. The TELUS proposal yielded the winning bid.
In June of 2020 the City of Victoria formally announced the winner as Telus with local partner Aryze Developments.
As one of Victoria's most prolific developers, Aryze Developments is known for its unconventional approach to urban architecture that delivers unique landmark projects to Victoria's urban core, along with creative infill homes in established residential neighbourhoods. The firm is currently selling its Rhodo townhome project in Fairfield, the Rotunda condominiums in James Bay, leasing its Friends sitcom-inspired Ross Terrace apartments in Quadra Village and collaborated with Mike Geric Construction on Tresah, an innovative mass timber-designed residential tower now selling in the Mayfair District north of downtown Victoria. C
Receive Citified's timely real-estate news straight to your inbox. Sign up for our newsletter, and connect with us on Facebook: 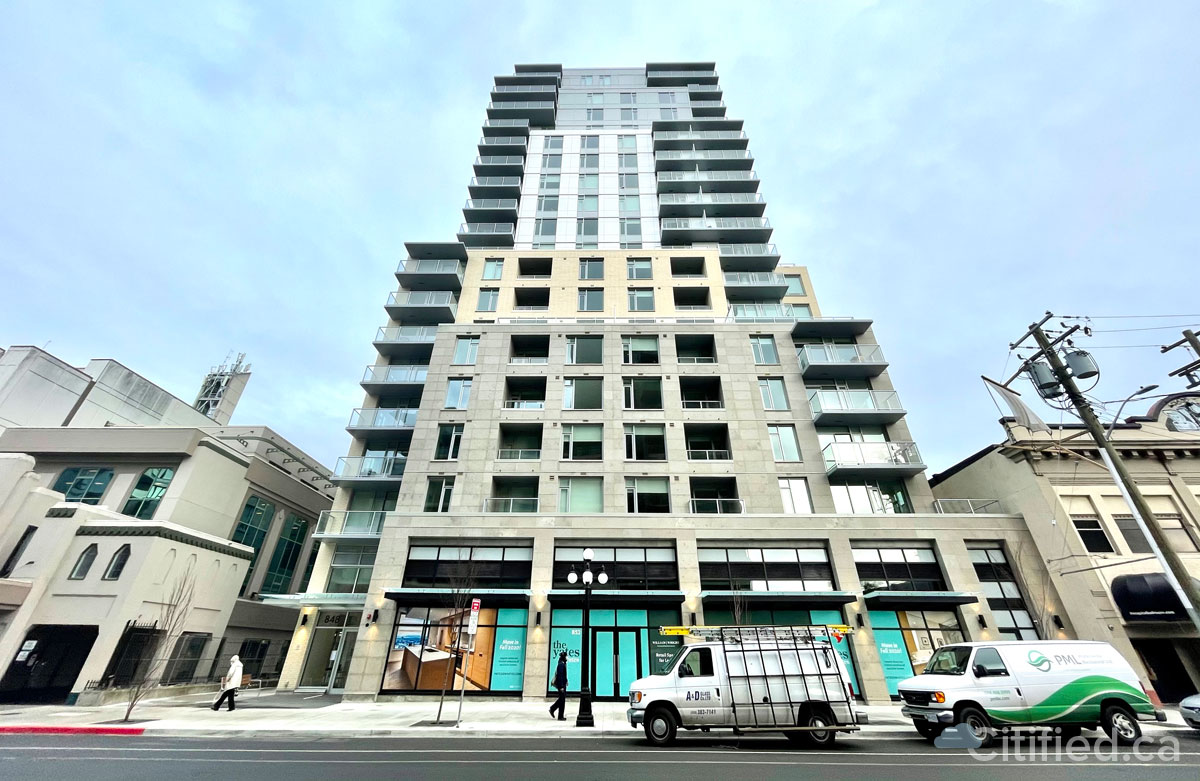