An artist's concept of Tallwood 1, a 12-storey, 124-unit purpose-built rental tower (seen in the background) now rising along the 2800-block of Peatt Road in downtown Langford. The tower, along with an adjacent five-storey office complex to its south (in the foreground) and a 12-storey highrise rental tower to its north (not depicted in the image above), will be built utilizing state-of-the-art mass timber construction materials.  DB Services

commercial, offices, rentals, West Shore
Langford's District 56 project will deliver Class AA office complex, 12-storey rental tower to city centre
MIKE KOZAKOWSKI, CITIFIED.CA
Construction has begun on a multi-phased mixed-use rental residential, retail and office project in downtown Langford.
District 56, a three phase undertaking along the 2800-block of Peatt Road between Goldstream and Hockley avenues, is moving forward with a five-storey, 47,000-plus square foot Class AA office building (called Terminus) at 2840 Peatt Road and a 124-unit, 12-storey rental tower at 2830 Peatt Road dubbed Tallwood 1. Both buildings will be constructed using state-of-the-art mass timber technology, as will the the yet-to-be-announced residential third phase.
Overseeing the design, planning and construction of District 56 is DB Services, a long-time player in Langford’s burgeoning purpose-built rental housing industry and a firm responsible for delivering the majority of the modern-built rental inventory clustered around Langford’s downtown core.
Terminus, rising at Peatt Road and Hockley Avenue, will be the first Class AA office building in downtown Langford and follows on the heels of a recent announcement by the provincial government that planning is underway to situate provincial offices on the Westshore, provided a pilot project in an office space at Langford’s Westhills community proves successful. With four levels of up-market office space and a ground floor retail component, Terminus will mark a pivotal change in the Westshore’s employment opportunities and is expected to be one of multiple office developments to be built in its immediate vicinity.
Completion is earmarked for the fall of 2020.
Immediately north of the office complex will be Tallwood 1, the first mass timber designed highrise to be built on Vancouver Island utilizing alternative materials to traditional woodframe and concrete construction.
Tallwood 1’s mix of one and two-bedroom residences (including variants with dens) is expected to be available for rent by the spring of 2021.
The final phase of District 56, which will overlook the Peatt Road and Goldstream Avenue intersection, is currently planned as a 12-storey rental tower although its finalized design and unit count have yet to be revealed.
Parking for the entire block will be primarily in the form of an underground parkade with surface stalls available at Terminus.
The Westshore has seen a uptick in highrise residential proposals in recent months, including a 15-storey mass timber-designed affordable rental tower adjacent to the Colwood Corners project, and a 15-storey residential concept has been revealed for the St. Anthony's Professional Centre property along the 500-block of Goldstream Avenue. Earlier this year DB Services completed Danbrook One, an 11-storey rental tower along the 2700-block of Claude Road in downtown Langford. Danbrook One marked the first highrise project to be constructed in the area and is second only to Finlayson Heights, an 11-storey condominium built a decade ago atop Bear Mountain. C
Receive Citified's timely real-estate news straight to your inbox. Sign up for our newsletter. 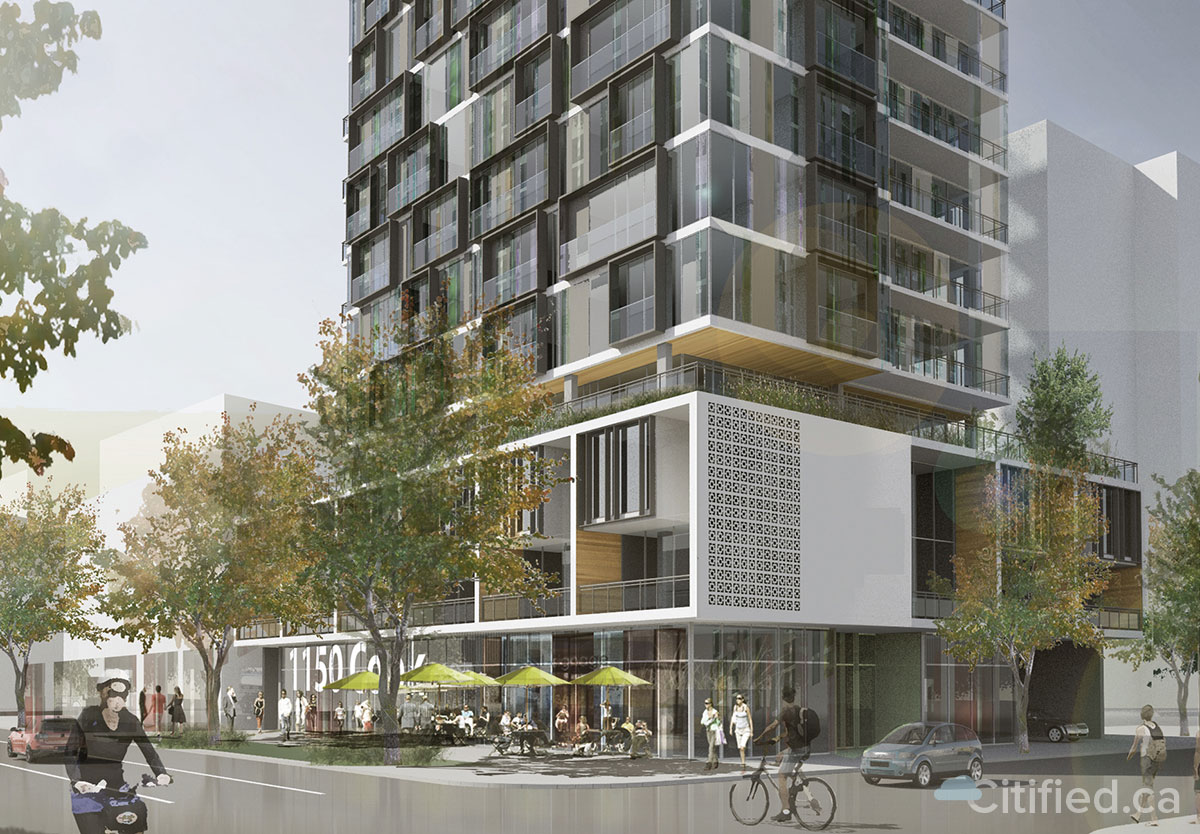