commercial, condos, offices, rentals, Urban core
BC’s richest man acquires landmark Douglas Street restaurant property in Victoria’s emerging ‘midtown’
MIKE KOZAKOWSKI, CITIFIED.CA
A popular dining destination in Victoria’s Burnside-Gorge neighbourhood has been acquired by Jim Pattison, the wealthiest man in British Columbia who appears to be banking big on the Capital’s emerging ‘midtown’ district.
Douglas Street’s location of Denny’s, a diner-style chain of eateries headquartered in South Carolina, is now in the hands of Pattison’s The Pattison Group, adding a final piece to significant land holdings under the billionaire businessman's control between the 600-blocks of Finlayson Street and Frances Avenue.
Crews are currently at the property conducting soil testing.
The Denny’s land at 3100 Douglas Street for decades had been flanked by the former location of Metro Lexus Toyota which operated vehicle lots along Finlayson Street immediately west of the restaurant, and along Douglas Street between Denny’s and Frances Avenue. Pattison purchased Metro Lexus Toyota several years ago and transitioned the operation across the street to a custom-built dealership that extends along the entire south Frontage of Finlayson Street between Douglas Street and Burnside Road.
Since then, Pattison’s The Jim Pattison Auto Group added Victoria’s Campus chain of automotive dealerships to its network, including Campus Honda, which is situated on Burnside Road between Finlayson Street and Frances Avenue. The acquisition extended Pattison’s reach across the entirety of the block, leaving only the Denny's site.
Pattison’s land holdings in Burnside-Gorge and Saanich’s Uptown-Douglas area have increased significantly with the buy-out of multiple automotive dealerships, just as the area begins its transition into a mixed-use, high density residential and retail node centred on the Mayfair District at Douglas and Finlayson streets.
Although north Douglas Street has long been envisioned as a residential and employment hub between Uptown and the downtown core, it was the recent completion of BC Transit’s Douglas Street dedicated bus lanes (connecting Herald Street to the Trans Canada Highway) and Saanich’s newly minted Uptown-Douglas Plan that provide a fundamental infrastructure and political target necessary to support the area’s build-out.
As such, both the City of Victoria and the District of Saanich are now working in unison to gentrify their mostly light industrial areas along the Douglas Street corridor into new urban zones by permitting high density residential developments amid pedestrian-friendly, transit-oriented infrastructure.
Speaking earlier this month to Citified about the first large-scaled residential project coming to the area, known as Tresah, developer Edward Geric of Mike Geric Construction says big changes are already underway for the Capital’s new ‘midtown.’
“Victoria’s long-held desire to see the north Douglas Street corridor mature into a thriving centre of commerce and modern housing is formally taking shape, and we see that with projects like Tresah and other efforts now emerging that will yield significant residential development over the next few years,” Geric said. “But most importantly from a real-estate investment perspective, we are on the precipice of one of the largest opportunities for homebuyers and business owners to get in early and build immediate equity, so-to-speak, since the multi-phased transformations at Vic West’s Songhees and Railyards developments, and the Selkirk Waterfront development not far from the Mayfair District.”
Tresah celebrated its groundbreaking on November 17th, officially kickstarting what Victoria Mayor Lisa Helps said at the event are big changes for the Burnside-Gorge neighbourhood and the midtown community jointly forming between Victoria and Saanich.
Pattison’s recent land investments, meanwhile, offer a level of certainty that speaks to the shared efforts and goals along the north Douglas Street corridor.
As for the future of Denny's at its current location and the agglomerated block, no details are available at this time. C
Receive Citified's timely real-estate news straight to your inbox. Sign up for our newsletter, and connect with us on Facebook: 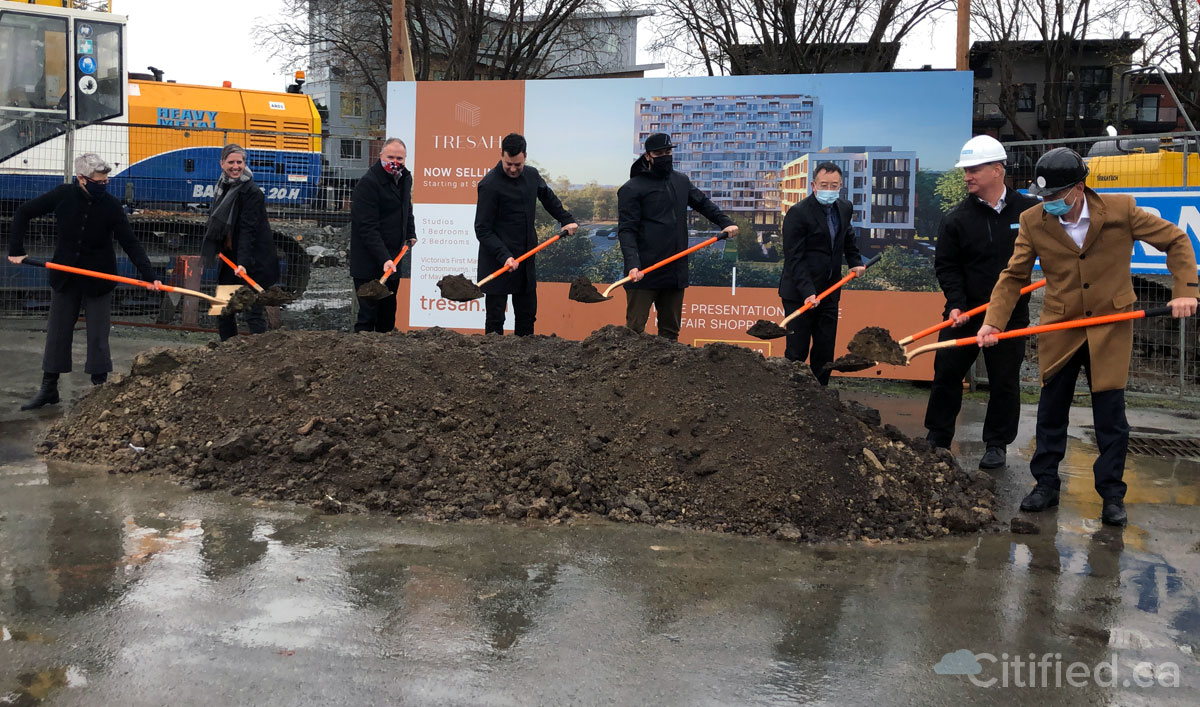