Tweet
Dignitaries celebrate the groundbreaking of Tresah, the region's first mass timber-designed condominium tower now underway between the 600-blocks of Frances and Speed avenues in Victoria's Mayfair District. Mayor Lisa Helps, at left, assists developer Edward Geric, at right, with a customary first shovel's-worth of moved soil.  Citified.ca
commercial, condos, Urban core
Construction begins on Tresah, Victoria's first mass timber-designed condominium tower
MIKE KOZAKOWSKI, CITIFIED.CA
A ground breaking ceremony kicking off the construction start of Victoria’s first mass timber-designed condominium tower took place today in the Mayfair District.
Developer Mike Geric Construction will deliver nearly 250 residences to the 600-blocks of Frances and Speed avenues in a duo of buildings known as Tresah West, a 12-storey highrise tower constructed from state-of-the-art cross-laminated and glue-laminated timbers, and Tresah East, a six-storey lowrise counterpart.
“Mass timber construction provides us a way to store huge amounts of carbon in new buildings,” said Edward Geric, President, Mike Geric Construction. “There’s approximately one ton of CO2 stored in every square metre of wood, which for a building like Tresah, means that each home effectively removes one vehicle from the road forever.”
Tresah’s late summer initial sales release produced a 50% sell-out of Tresah East’s 68 homes, and 20% of Tresah West’s 179 residences have been reserved as a fall sales campaign ramps up.
Suites in Tresah West are comprised of junior one-bedroom, one-bedroom, two-bedroom and penthouse floorplans, while Tresah East is selling studio flats, one and two-bedroom homes.
First time homebuyers have shown significant interest in Tresah for its sustainability, starting price points below $300,000, and the opportunity to invest early in the neighbourhood. Convenience has also played a key theme among purchasers, given the project’s central location in the heart of the region with nearby access to major bus routes and cycling infrastructure. For those who do not plan on owning a car, Tresah’s sales team is selling parking as an add-on, while two electric MODO car share vehicles will be available to residents on-site.
Mayor Lisa Helps, who attended the groundbreaking event, said she is looking forward to the project’s completion and views mass timber construction as an emerging building material of the future.
“It is thrilling to witness the groundbreaking of Victoria’s first mass timber condo building,” said Helps. “I was at an event last year with Premier Horgan who profiled the benefits of mass timber for BC’s forestry industry and as a form of climate action. A picture of Tresah was featured as part of his presentation. It’s great today to see that picture turn into reality in our city. I look forward to many more to come.”
The mayor further added that today's groundbreaking kickstarts the formation of a new "midtown" region, between downtown Victoria and Saanich's Uptown.
While Tresah is the first condominium project to come to market as part of a comprehensive push for development along north Douglas Street, Geric and his team are not strangers to Speed Avenue. Several years ago the developer completed Brizo 19, a boutique condominium at the western end of the small street and together with the restoration of a motel at the Douglas Street end of Speed Avenue into Hotel Zed (a trendy up-market lodging start-up from the Accent Inn chain of hotel properties) the first pieces of the puzzle were cemented.
Since then, a string of luxury automotive dealerships have redeveloped light industrial lands along Douglas Street to deliver modern showrooms for brands like Land Rover, Porsche, Maserati, Audi and Lexus, while significant investments have taken place to transform under-utilized properties that include a Starbucks coffee shop just north of Tresah’s site, and the Tally-Ho Hotel south of Finlayson Street between Burnside Road and Douglas Street where a residential complex (fronting Burnside Road) and a six-storey office building (along Douglas Street) will rise.
Mayfair Shopping Centre itself was expanded in 2018 as part of a $72 million infusion into the mall that expanded retail spaces and gave its Douglas Street façade a big-city look.
North of the Saanich/Victoria border Aryze Developments, which is partnered with Mike Geric Construction to assist with Tresah’s project and marketing management, is in the early stages of re-envisioning the former Island Outfitters property on Douglas Street at Cloverdale Avenue into a substantial mixed-use residential and commercial pursuit. Aryze’s plans emerged last week as the first proposal to take advantage of the district’s Uptown-Douglas Plan which sets out a vision for landmark buildings to reach heights of upwards of 24-storeys.
The above follows several years of densification at Oak Street and Short Street, which coincided with the development of Uptown Shopping Centre where future residential density is also anticipated.
And further south at the municipal border, Loblaw Companies, which operates brands like SuperStore and Shoppers Drug Mart, has ambitious plans for a significant land holding at the former location of the Mayfair Lanes bowling alley at Tolmie Avenue and Oak Street. The retail giant acquired the land some ten years ago and is expected to redevelop its holding into a commercial destination.
Looking further to the future, Douglas Street is earmarked as a light rail corridor that will connect downtown Victoria with the West Shore. The provision of more housing and employment will work to fast-track those plans which hinge on densities to become viable transportation options.
To learn more about Tresah and connect with the project’s sales team, view the website here. To visit Tresah’s presentation centre at Mayfair Shopping Centre on Douglas Street, drop by between 12PM and 5PM Wednesday or Friday or on Saturday and Sunday between 1PM and 4PM, or call 250-532-7177 to schedule a private appointment. C
Receive Citified's timely real-estate news straight to your inbox. Sign up for our newsletter, and connect with us on Facebook: 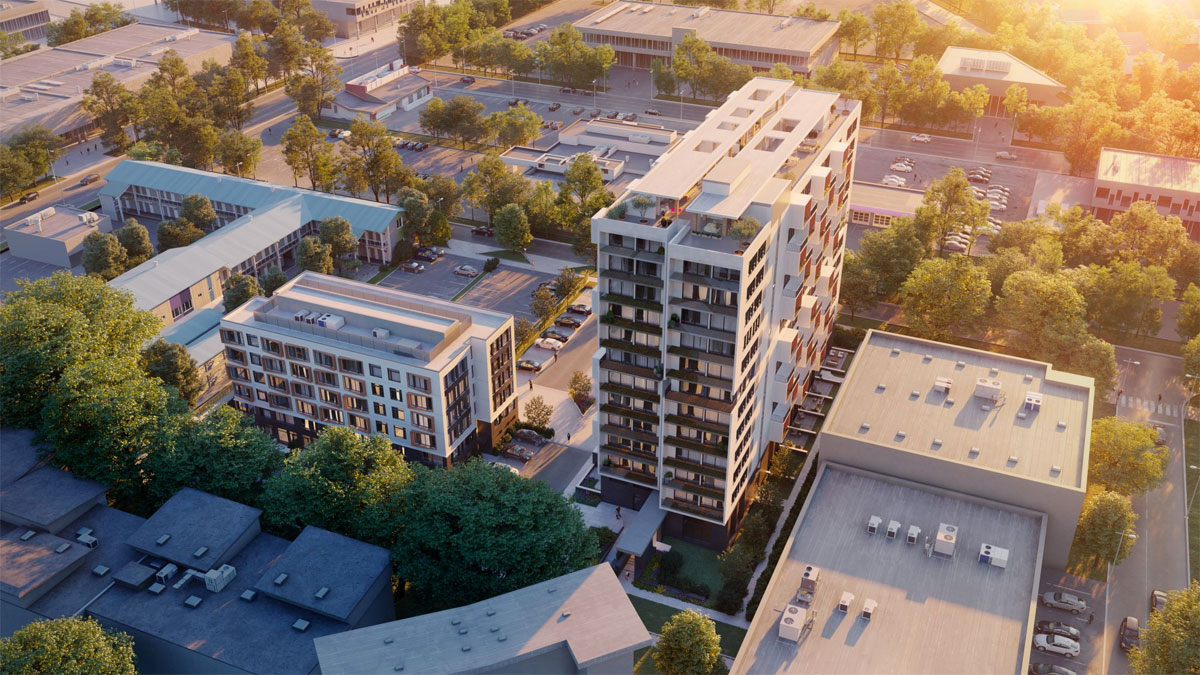