A rendering of Tresah, a 247-home mass timber-designed condominium project coming soon to Speed and Frances avenues in the Mayfair District of Victoria. The area is part of a comprehensive effort by the City of Victoria and the District of Saanich to densify and modernize the Douglas Street strip between downtown Victoria and Saanich's Uptown area.  Mike Geric Construction

commercial, condos, Urban core
North Douglas Street's transformation into high density residential corridor begins with mass timber-built Tresah condos
MIKE KOZAKOWSKI, CITIFIED.CA
The urban transformation of Victoria’s Douglas Street corridor north of Hillside Avenue into a mixed-use, pedestrian-friendly residential and commercial area is taking shape as urban planners begin the process of unwinding decades of light industry-dominated development patterns.
Stretching from the northern boundary of downtown Victoria to Saanich’s Uptown neighbourhood is the Mayfair District, an area known for its popular shopping centre anchoring the intersection at Douglas and Finlayson streets amid an eclectic mix of local businesses, small manufacturers, automotive service providers, pockets of residential as well as its connection to nearby parks, playing fields, the Gorge Waterway and the Galloping Goose regional trail.
Although north Douglas Street has long been envisioned as a residential and employment hub between Uptown and the downtown core, it was the recent completion of BC Transit’s Douglas Street dedicated bus lanes (connecting Herald Street to the Trans Canada Highway) and Saanich’s newly minted Uptown-Douglas Plan that provide a fundamental infrastructure and political vision necessary to support the area’s build-out.
“Think of north Douglas Street and the Mayfair District as Vancouver’s West 4th and Kitsilano communities before they became the destinations we regard them as today,” says Edward Geric, President of Mike Geric Construction who is spearheading Tresah, one of the largest condominium developments ever conceived north of Bay Street. “The melding of similar interests between Victoria and Saanich along Douglas Street is presenting our city with a clean slate to transform an under-utilized area into a cohesively-planned high density, urban neighbourhood that's ideally located in the region with easy access to downtown, the Western Communities and the Saanich Peninsula by car, transit or bicycle."
Tresah – a 12-storey mass timber-designed residential highrise earmarked for the 600-blocks of Speed and Frances avenues west of Douglas Street and a stone’s throw from Mayfair Shopping Centre – is setting the stage for the Mayfair District’s renewal with its infusion of residential density and a world-class design from the highly acclaimed architectural firm D’Ambriosio Architecture + Urbanism.
Split into the 12-storey mass timber Tresah West and the six-storey Tresah East, the project will create 247 homes by 2022 to kickstart what Geric and the broader development community view as the beginning of a density influx between Bay Street and Saanich Road.
“Victoria’s long-held desire to see the north Douglas Street corridor mature into a thriving centre of commerce and modern housing is formally taking shape, and we see that with projects like Tresah and other efforts now emerging that will yield significant residential development over the next few years,” Geric says. “But most importantly from a real-estate investment perspective, we are on the precipice of one of the largest opportunities for homebuyers and business owners to get in early and build immediate equity, so-to-speak, since the multi-phased transformations at Vic West’s Songhees and Railyards developments, and the Selkirk Waterfront development not far from the Mayfair District.”

To that fact the market has eagerly responded.
Tresah’s late summer early sales release produced a 50% sell-out of Tresah East’s 68 condominiums (Tresah East also includes ten affordable rental apartments), and 20% of Tresah West’s 179 residences constructed from state-of-the-art cross-laminated and glue-laminated timbers have already been reserved ahead of a formal sales campaign launching this fall.
“The investor community and first-time purchasers drawn by Tresah’s $289,900 introductory price point shows how much interest there is in this part of town, and we were flooded by people wanting to learn more about the future of the Mayfair District and Tresah’s role in bringing it all together at this early phase of growth,” Geric said.
While Tresah is the first condominium project to come to market as part of a comprehensive push for development along north Douglas Street, Geric and his team are not strangers to Speed Avenue. Several years ago the developer completed Brizo 19, a boutique condominium at the western end of the small street and together with the restoration of a motel at the Douglas Street end of Speed Avenue into Hotel Zed (a trendy up-market lodging start-up from the Accent Inn chain of hotel properties) the first pieces of the puzzle were cemented.
Since then, a string of luxury automotive dealerships have redeveloped light industrial lands along Douglas Street to deliver modern showrooms for brands like Land Rover, Porsche, Maserati, Audi and Lexus, while significant investments have taken place to transform under-utilized properties that include a Starbucks coffee shop just north of Tresah’s site, and the Tally-Ho Hotel south of Finlayson Street between Burnside Road and Douglas Street where a residential complex (fronting Burnside Road) and a six-storey office building (along Douglas Street) will rise.

Mayfair Shopping Centre itself was expanded in 2018 as part of a $72 million infusion into the mall that expanded retail spaces and gave its Douglas Street façade a big-city look.
North of the Saanich/Victoria border Aryze Developments, which is partnered with Mike Geric Construction to assist with Tresah’s project and marketing management, is in the early stages of re-envisioning the former Island Outfitters property on Douglas Street at Cloverdale Avenue into a substantial mixed-use residential and commercial pursuit. Aryze’s plans emerged last week as the first proposal to take advantage of the district’s Uptown-Douglas Plan which sets out a vision for landmark buildings to reach heights of upwards of 24-storeys.
The above follows several years of densification at Oak Street and Short Street, which coincided with the development of Uptown Shopping Centre where future residential density is also anticipated.
And further south at the municipal border, Loblaw Companies, which operates brands like SuperStore and Shoppers Drug Mart, has ambitious plans for a significant land holding at the former location of the Mayfair Lanes bowling alley at Tolmie Avenue and Oak Street. The retail giant acquired the land some ten years ago and is expected to redevelop its holding into a commercial destination.
Looking further to the future, Douglas Street is earmarked as a light rail corridor that will connect downtown Victoria with the West Shore. The provision of more housing and employment will work to fast-track those plans which hinge on densities to become viable transportation options.
To learn more about Tresah and connect with the project’s sales team, view the website here. To visit Tresah’s presentation centre at Mayfair Shopping Centre on Douglas Street, drop by between 12PM and 5PM Wednesday or Friday or on Saturday and Sunday between 1PM and 4PM, or call 250-532-7177 to schedule a private appointment. C
Receive Citified's timely real-estate news straight to your inbox. Sign up for our newsletter, and connect with us on Facebook: 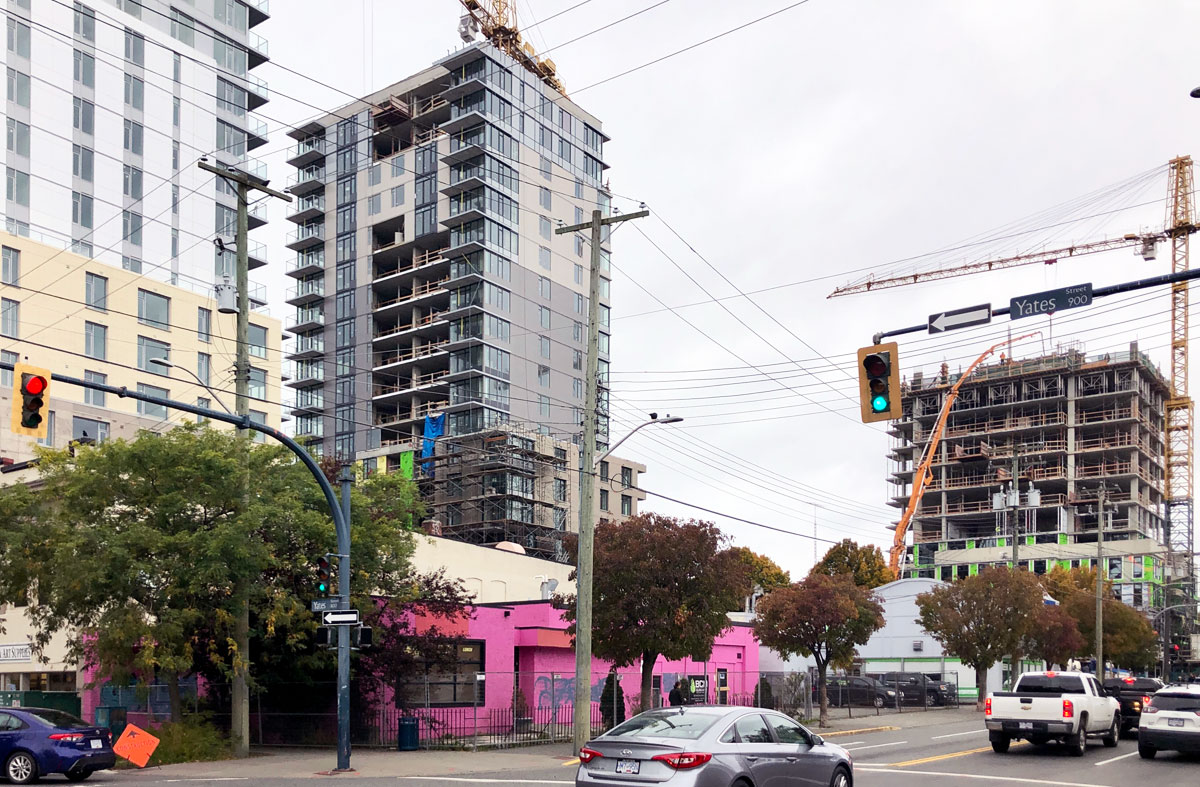