commercial, condos, townhomes, Urban core
17-storey condominium tower, townhomes and childcare facility proposed for James Bay parking lot
MIKE KOZAKOWSKI, CITIFIED.CA
A surface parking lot in Victoria’s James Bay neighbourhood could be transformed into a highrise residential tower, townhomes and retail spaces as part of a redevelopment proposal from developer Mike Geric Construction (MGC).
The company has submitted its vision to the City of Victoria in partnership with D’Ambrosio Architecture + Urbanism for 205 Quebec Street, 597 Montreal Street and 210-224 Kingston Street, a high-profile holding acquired by MGC earlier this year in James Bay’s northwest corner.
Development plans call for a 17-storey condominium tower rising at Quebec and Montreal streets, with a daycare facility fronting Quebec Street, and townhomes along Kingston Street. Total residential density will top 110 suites, ten of which are earmarked as multi-storey townhomes. Commercial spaces will surpass 7,000 square feet, including the daycare, with retail units within the tower's base.
Community consultations, the developer says, helped craft the density and massing of the architectural plans now before the City.
“Our first priority with this property was to start a meaningful dialogue with our neighbours and the broader community. We’ve done a lot of listening, which included two public open house events in August where we met with more than 150 local residents,” said Edward Geric, president of Mike Geric Construction. Geric continued:
“We’ve taken all the feedback we've received very seriously and incorporated significant changes to our initial planning for the site. The most significant was lowering the podium height and creation of a tapered tower oriented north/south to reduce shadow and view impacts, the purchase of a neighbouring property to make room for more family-oriented townhomes, and a pull-back of the development at the corner of Quebec and Montreal streets to improve safety and sightlines, all while creating space for an expanded café patio and public square with seating and landscaping. We've also confirmed the inclusion of a childcare centre, created more homes suited to aging-in-place and made significant commitments to enhance the public realm and walkabilty around the site.”
Envisioned with a slender tower as the project’s landmark, D’Ambrosio’s architectural design calls for a distinctly 70s-era theme with modern flair. The studio has in recent years shifted many of its architectural plans to hearken back to dominant styles of the 70s and 80s by using colour palettes and design cues reminiscent of multi-family and commercial developments of that vintage.
D’Ambrosio’s plan situates the tower at the northwest corner of the land (at Quebec and Montreal streets) and its three-storey podium along Montreal Street. Two-storey townhomes span the property’s length along Kinston Street.
With respect to a planned daycare facility, MGC stated in a letter prepared for Victoria council that “a minimum wait list time of 1-2 years for childcare spaces in Victoria and James Bay has the third highest rate of unmet demand for licensed childcare” in the Capital Region, citing an under-supply of 250 childcare spaces. The project will add 49 spaces as part of a “ground-level indoor and outdoor courtyard space that is programmable, desirable and flexible” which, MGC says, meets the requirements sought by qualified daycare operators.
Residential units will range from studio to three-bedroom layouts within the condominium tower and its podium, while townhomes will feature two and three-bedroom options, with 15% of homes priced at below market rates as part of a government partnership program. Parking will be in the form of an underground parkade with stalls for nearly 150 vehicles.
“As a local developer, we're very proud and excited to have the opportunity to bring a proposal forward to redevelop this surface parking lot in James Bay into a beautiful and amenity-rich asset for the neighbourhood,” Geric says. “We’re looking forward to continuing our discussions with the community and welcome feedback at this early stage of our application process.”
With the proposal in its infancy, municipal approvals are not anticipated until 2022, pending design changes and further community consultation.
MGC, meanwhile, is full-steam ahead on a milestone project in Victoria’s burgeoning Mayfair District along upper Douglas Street. Tresah, a mass timber-designed highrise condominium, is underway on Speed Avenue opposite Mayfair Shopping Centre. The 245-suite project will deliver the Island’s first mass timber-built highrise condominium, and is one of the first adopters of mass timber building technologies in North America. Tresah, now selling, has captured the interest of first-time purchasers, individuals seeking a unique housing form made possible through mass timber construction, and the investor market.
The company is also moving towards the sales launch of Doral Forest Park, a condominium development adjacent to the forest lands of Elk and Beaver lakes in Saanich that will incorporate an affordable housing initiative.
Receive Citified's timely real-estate news straight to your inbox. Sign up for our newsletter, and connect with us on Facebook: 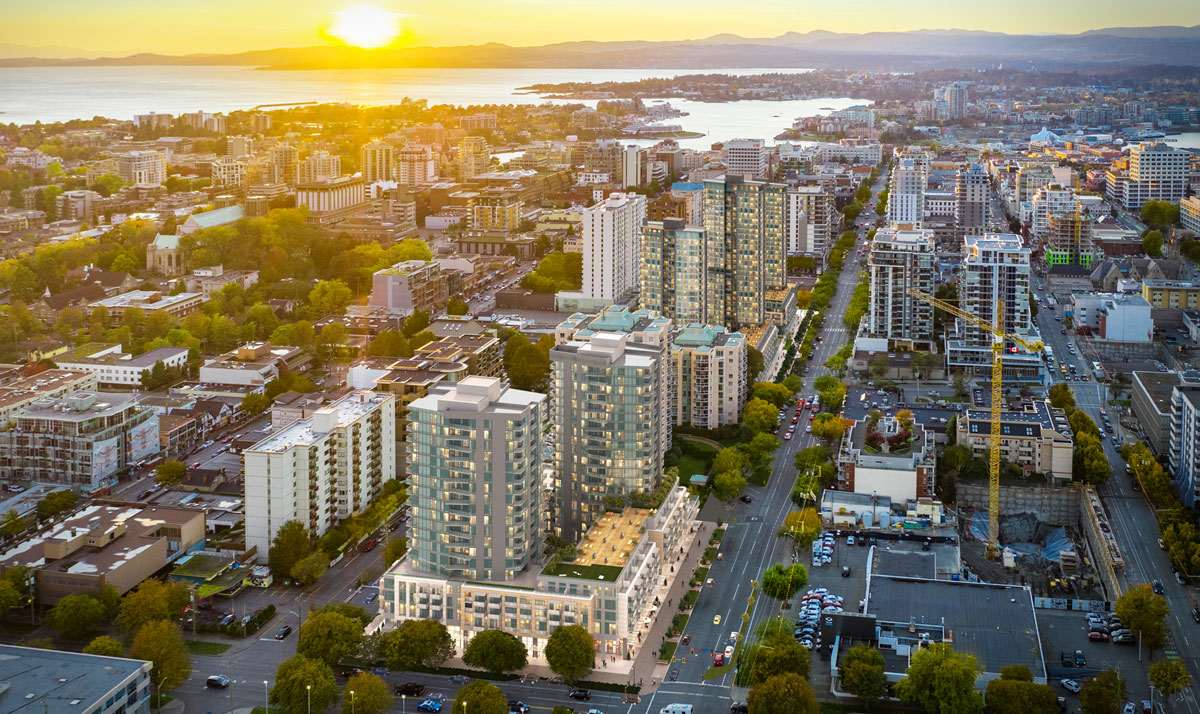