Three years after touring Victoria’s Customs House mixed-use condominium and retail offering during its interior de-construction, Citified is honoured to be the first media organization invited for a pre-completion site visit to one of Canada’s most storied residential undertakings.

Customs House, at the nexus of Government, Wharf and Humboldt streets, is nearing its grand unveiling after four years of construction, and we’re taking our readers on a behind-the-scenes walk-through as the finishing touches come together.

To put the $100 million project into context, the four-storey heritage portion of Customs House office block dating back to 1914 was rebuilt with three levels of underground parking. The turn-of-the-century sandstone façade facing Wharf, Humboldt and Courtney streets was restored as part of a carefully executed retention program, and a set-back fifth level of residences was added.

The building’s four-storey 1950’s-era addition that stood over Government Street between Humboldt and Courtney streets was replaced by a modern seven-storey wing.

This effort lead to the creation of 57 luxury suites in two styles, one a heritage collection within the restored 1914 wing, and the other a contemporary release in an elegant, stone-clad new-build designed by Merrick Architecture and Studio One Architecture.

Guiding our visit, which as a curious fact began only feet above sea level at the lowest point of the multi-storey parkade, was developer Johnathon Sipos of Cielo Properties who has been involved in marshalling the entire effort since its launch in 2016.

“Building Customs House has been a carefully choreographed transformation of a crown jewel of the Inner Harbour,” Sipos said. “We embarked on this no-expenses-spared condominium offering to be a trendsetter on Vancouver Island, and I couldn’t be any more pleased with how the project has unfolded given all the challenges along the way.”

From three-storeys down, the tour worked its way up along over-height parkade floors embellished by polished concrete, bevelled edges and plenty of clearance for large pick-ups or SUVs.

At ground level, the future commercial space enveloped by Government, Humboldt, Wharf and Courtenay streets got the imagination running, and although secrets remained held, Sipos did say the commercial operations will be a head-turner.

Climbing to the second floor the scale of the hallways and elevator lobbies was atypically spacious. The benefit, after all, of converting the expanse of a former commercial block into flats is the square footage works in your favour. Meanwhile, a portion of the second floor will include a large gym and an accompanying amenity pairing that too will remain hush for now.

“The floorplates of an office building, when converted into residential use, provide a large volume of interior space that allocates so much more usable room than is standard in modern condominiums,” Sipos says. “And with that footprint to work with, all facets of the building have the luxury of size, including common areas."

Sipos walks up to a door and turns the key. The entrance to our first showcase opens to a view of the Parliament Buildings. The postcard worthy backdrop is made all the more impressive by sailboats docked at the Inner Harbour’s lower causeway, and is flanked by none other than The Empress.

This suite (in Customs House’s new-build wing) is expansive in every sense, and features a ceiling height pushing above 9’-6”  to lend an ambiance remarkably similar to a Manhattan estate. Given the heritage based design, the building's footprint varies on every floor, leading to unique layouts and changing ceiling heights on every floor. Something artistically far more interesting, albeit exponentially more challenging construction-wise.

Although a work in progress, the condominium is nearly ready for occupancy, with the last remnants of an Italian-built and designed kitchen install – at the hands of an expert team of German installers – ready for their placement. The kitchen wares are state-of-the-art appliances that include an emerging trend for high-end homes: a built-in espresso maker and steam oven, among others. A glass-sheathed climate controlled wine closet stands over the space, with room for hundreds of bottles in a floor-to-ceiling accent that, like the java maker, is market-setting.

Before moving on to the principle bedroom, we take note of traffic outside, and Sipos asks, “can you hear it? We’re just a floor above the street, and you didn’t notice the din, did you?”

The unit was indeed quiet. Near floor-to-ceiling triple-pane windows have done their job, making the urban space feel as serene as a suburban dwelling. And thick insulation in the walls, ceilings and padded flooring keep interior noise contained for added privacy.

As for the bedroom, its stately size was impressive, but focus was drawn to the ensuite.

“You don’t find this in Victoria too often,” Sipos says, pointing towards a curtain-less shower adorned with marble and rich stone. “Everything about this is opulent, but it’s humble and functional."

So beautiful was the ensuite that immediate notice was not even given to an impressive walk-in closet between it and the bedroom despite its immaculate custom shelving and efficient storage.

Concluding the first showcase, which happened to be one of only eight homeownership opportunities still available for purchase, Sipos walks towards the heritage side of the build, and enters unit two of the tour.

“When we realized how stunning the brick was, we wanted to emphasize how amazing it would make the interior living spaces look. And clearly this was a winning decision that makes the heritage collection feel complete by making rooms with 14 foot ceilings feel cozy and welcoming.”

The remainder of the finishings follow the interior design of the new-build suite, with high-end luxury at every turn, including ample use of ceiling pot lighting to add passive warmth and brightness.

Sipos now guides us towards a flight of stairs leading to level three, where he stops at a stairwell window adjacent to a large concrete structural column to speak about the complicated work of column alignment, and how the project’s structural elements had to take into consideration (and sometimes shift) column placements near windows or doorways.

“There were a few instances where we realized columns would block windows or pose other challenges on the heritage side, requiring some ingenuity and problem solving to avoid ruining sight lines or impacting livability."

Continuing up two more levels, Sipos stops on the fifth floor (the apex of the historic wing) and introduces the future residence of Trish Labuda, a Vancouverite who fell in love with Customs House and chose one of its premier penthouse suites as her home.

Labuda, a businesswoman with an eye for real-estate, agreed to speak with Citified about her decision to relocate to Victoria, and why Customs House became her choice of address.

“I don’t think there is anything else like it,” Labuda said. “It is such a unique project, and it is in such a perfect location that I don’t think I’ll even need my car to get around."

With business dealings in Vancouver and a love of boating, Labuda says Customs House’s proximity to Victoria’s seaplane base and the lower causeway’s marina were strategic advantages that sweetened the deal for her, but the residence itself, which Labuda calls a gem, made firm her choice to move into downtown Victoria’s residential landmark.

“I could not get over how special the homes were, all of them. You can’t wrap your head around how spectacular Customs House is from the architectural renderings or the informational materials. You have to experience this project for yourself to appreciate what is taking place within.”

Labuda’s 2,000 square foot suite is the epitome of luxury, with a 1,000 square foot wrap-around outdoor patio enveloping the south and west exteriors. Inside the finishings are immaculate, lending a degree of comfort on par with that of the renowned, five-star hotel next door.

Labuda says she is excited to embrace a downtown lifestyle for the first time, and called Victoria’s walkable city centre an exciting place to be.

“I can’t wait to try a different restaurant every evening, to have all of the downtown to explore, and if I need to make my way to Vancouver I have the option of walking down to the seaplanes next door. It’s just perfect.”

Leaving the Labuda residence, the tour makes its way up the final two levels to what emerges as a pinnacle of Victoria real-estate, with tremendous views from its unimpeded vantage point.

Customs House made national headlines in 2018, in fact, when this home – a 4,400 square foot estate with its own private rooftop patio – sold for a record-breaking $11 million. The sale pushed Victoria’s highest-achieved square footage rate for luxury condominiums to nearly $2,500 from its former perch at $2,000, which itself was in the same building. Present-day new-build offerings throughout the Capital typically range between $900 and $1,400 per square foot.

This dramatic penthouse, extravagant in every way, is destined for magazine covers, and its rooftop terrace sets the scene for classy engagements.

From the vantage of its terrace, we have a close-up view of the new-build wing’s exterior stone finishings, which Sipos said required the expertise of seasoned stonemasons brought in from across Canada. In light of mass-produced building products available on the market, the artisans capable of building with stone are few and far between. And while their efforts may go unseen by most, to the discerning eyes of the developer and the building’s residents, the work is a salute to a timeless, fitting addition to Victoria’s Inner Harbour.

And now that completion is just weeks away, interest in the project’s remaining homes is top-of-mind among the Capital’s monied homebuyers waiting for move-in ready opportunities.

“Victoria’s pre-sale market is one of the strongest in Canada. However, unlike Vancouver or Toronto, there is often pent-up buyer demand awaiting completion and immediate possession for suites at higher price points,” says Craig Anderson of real-estate marketing firm Magnum Projects, which is spearheading Cielo Properties’ sales effort. “This is an exciting time for us, and with only eight of 57 homes remaining priced from $2.9 million, market interest has ramped up as construction draws to a close.”

Knowing that developers like Cielo Properties are willing to undertake the degree of dedication necessary to showcase Victoria’s heritage and deliver projects destined for international acclaim through pursuits most trying, Victoria’s future as an emerging cosmopolitan city is bright.

Citified would like to thank Cielo Properties for organizing this highly informative tour of Customs House, and allowing us a glimpse into a market-changing investment into Victoria’s heritage. We look forward to Customs House’s completion, and what comes next for the Cielo team.  C 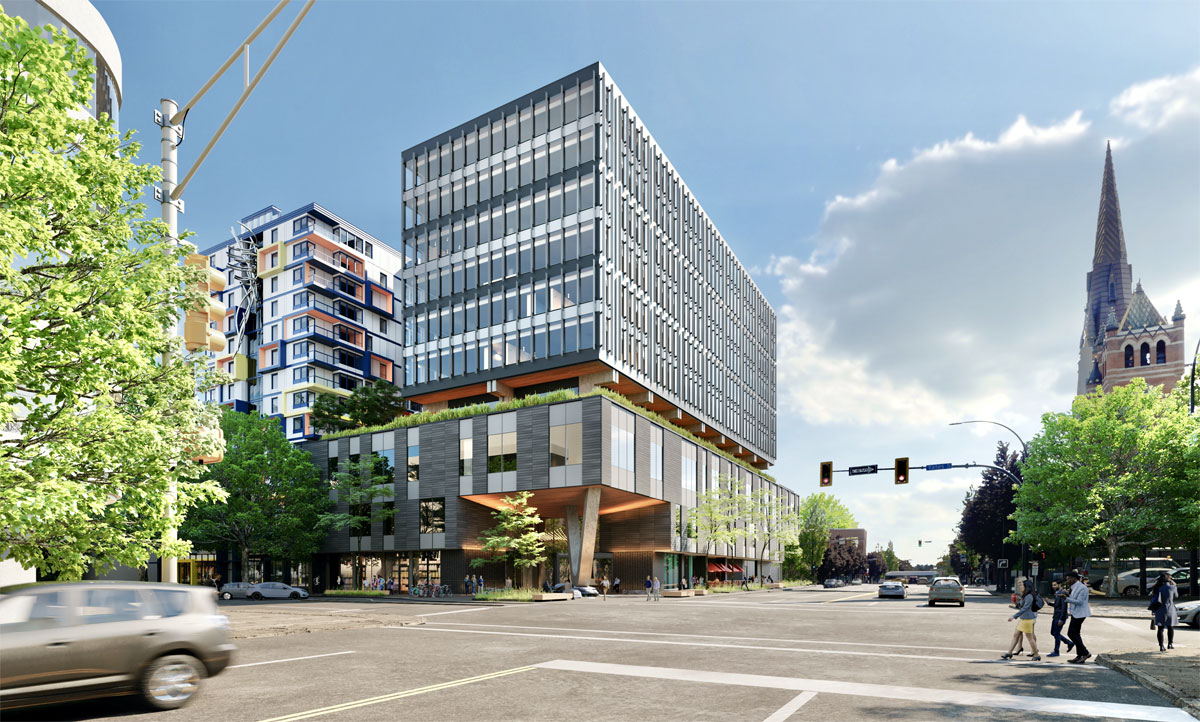