An aerial of downtown Victoria's Chinatown neighbourhood. The Janion, seen in this 2015 photo under construction at-right, is nearing construction along Pandora Avenue at Store Street. With demand for Chinatown homes skyrocketing, the limited supply that is available, such as the 595 Pandora condo development (at-left next to the tan coloured building) is garnering attention.  Citified.ca

Nowhere have the effects of downtown Victoria’s urban revival been as transformative as throughout history-rich Chinatown.

The area’s 19th century charm, traditionally home to an eclectic community of artists, musicians and students, is today considered one of the most diverse and sought out neighbourhoods in all of Victoria as developers pour millions of dollars into heritage restoration and real-estate development efforts.

And with one of the City’s most anticipated heritage reclamations nearing completion – only a short time ago serving as an unfortunate example or urban neglect – the century-old Janion Hotel development has become immortalized as an iconic architectural asset.

“Victorians have been eagerly anticipating the arrival of the refurbished and restored Janion, and I’m so proud to say it’s nearly ready for its unveiling,” said George Wong, president of Magnum Projects, the marketing firm responsible for the Janion’s historic near sell-out on the first day of its sales launch back in 2013.

“What we realized when we began marketing the Janion development, was just how special the building is to Victorians, how special Chinatown is to the greater community.”

Although the Janion followed in the footsteps of earlier developments such as 601 Landmark on Herald Street and The Union between the 500-blocks of Fisgard Street and Pandora Avenue, it has been considered by many as the benchmark of transformation that drew mass interest to the area and has sustained it ever since.

“The Janion virtually sold out in one day. Since then not a single Chinatown condo development brought to market remains unsold nor have new, purpose-built rental apartments remained unoccupied,” Wong said.

Drawn to where demand for condos-turned-rentals is high and a burgeoning vacation rental industry that can’t get enough of what is arguably one of North America’s most unique urban destinations, investors have increasingly begun to zero in on opportunities west of Douglas Street.

Nancy Paine, CEO and co-founder of Victoria-based Spacehost, a vacation rental management firm, says real-estate investors specifically seek out condo inventory in areas like Chinatown for their resiliency and the multi-faceted investment opportunities they present.

“My clients are keen to invest in established urban neighbourhoods. They know it’s a safe move, they know that whether their unit is used as a vacation home or as a long or short term rental, an established urban neighbourhood popular with locals equates to few issues with finding tenants and has a positive effect on re-sale value,” Paine said, adding that modern condo developments favouring smaller units, such as studio, one-bedroom and junior one-bedroom layouts, are also more likely to weather economic downturns as smaller units appeal to a larger pool of buyers.

As demand for the area’s housing far outstrips supply, would-be purchasers have been paying close attention to an upcoming residential development, 595 Pandora.

The five-storey, 53-unit condo is nearing completion in the 500-block of Pandora Avenue following a two year transformation from a 1980’s-era federal office complex into residences. Touted as a nearly move-in ready project, 595 is expected to attract interest from both purchase-occupiers and investors when it hits the market later this month.

Although details regarding the project have only begun to emerge in recent days, developer Cielo Properties has for the first time confirmed the unit make-up.

“In the case of Victoria’s Old Town, and particularly what’s been happening along Pandora Avenue and points further north, the industry has literally come upon a situation where demand far outstrips supply. This scenario, in all honesty, is a true indicator of long-term value for purchasers,” Wong said. C

One year in, Victoria's real-estate buying frenzy far from over 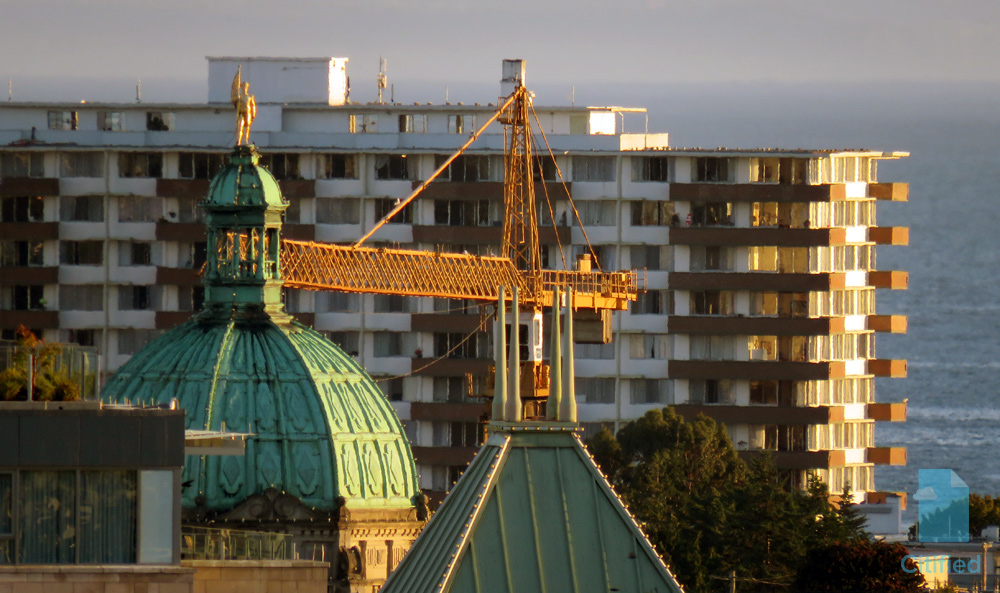