The newly-opened Hudson Walk dog run and children's play area 'pocket park' at downtown Victoria's Hudson District is a key component of development firm Townline's pedestrian realm-focused urban planning. Townline's last phase at the District, which could see the construction of Vancouver Island's tallest building, uses the pedestrian experience and its location next to a historic landmark as guiding principles for the tower's 29-storey design.  Citified.ca

commercial, condos, Downtown Victoria
From the ground up: design of Island’s tallest tower influenced by historic landmark, pedestrian realm
MIKE KOZAKOWSKI, CITIFIED.CA
Plans to build what could become Vancouver Island’s tallest building took a major step forward last week with the public unveiling of a 29-storey design concept for downtown Victoria’s north end.
Hudson Place One, a condominium and retail complex proposed by development firm Townline for 777 Herald Street (behind the Victoria Public Market), will become the pinnacle of the last phase of construction at the Hudson District, a neighbourhood that already encompasses the restored Hudson’s Bay Company department store, hundreds of purpose-built rental residences, and what many Victorians may not realize: a decade-old municipal green-light to erect the Capital’s tallest tower.
The exact size of Hudson Place One, however, is up for debate following Townline’s decision to pursue a revised plan to the one approved back in 2007.
A development permit application for the first of two buildings envisioned at the District’s last undeveloped site is currently before the City of Victoria. The developer is seeking to push the 24 or 25-storey, 72 meter building to 84.4 meters while redistributing a modest amount of the overall approved density (the number of residences) through height rather than bulk at the podium levels.
“Whether Hudson Place One rises to 24, 25 or 29-storeys, it will stand as a prominent feature in Victoria's downtown and as the skyline continues to change,” said architect Foad Raffi of Raffi Architects.
“We’ve worked with Townline on over 20 schemes for Hudson Place. Adding height resolved a lot of our issues of having a bulky podium wrapping around Fisgard, Blanshard and Herald [streets] and greatly improves how we will approach the final vision for the second building.”
Raffi’s architectural rationale for the building speaks to a form and materials that are highly complementary to the nearby built environment, namely the Hudson (a meticulously restored example of Victoria’s early 20th century architecture), several highrise residential towers and mid-rise office blocks. With an exoskeleton influenced by the Hudson, the geometric shapes of Hudson Place One are instantly recognizable within its historic and post-modernist surroundings all the while introducing a presence uniquely its own.
Townline’s director of development for Victoria, Justin Filuk, reiterates the architectural nod to the Hudson.
“If you look at the Hudson, and then observe the details that show up on the 12-storey Hudson Mews next door, you can see where the design inspiration for Hudson Place One originates from. And as you study that design you’ll notice where we’ve given the future building a more contemporary appearance.”
Other features of the building, like exterior trees and sky gardens on levels where the tower steps back, are a gesture to Victoria’s well-tended reputation as The City of Gardens.
Raffi has designed dozens of buildings across North America, some of which (including the 30-storey Pomaria condominium tower in Vancouver) successfully incorporated exterior greenery. The architect notes that “because Townline builds their own projects they invite their construction managers to have input during the creative process where we collectively figure out details like the viability of items like sky gardens. This ensures they will be a successful feature of the building.”
Asked about public feedback following the reveal of the 29-storey plan, Filuk said that Townline has fielded more comments regarding a recent decision to remove parking behind the Victoria Public Market than the prospects of a tall tower.
“Our retail tenants, especially the smaller vendors in the Victoria Public Market, are very excited that the project is moving forward.  We’ve held a few information sessions about the project to provide updates to local residents about construction and changes to traffic flow and parking. While changes to the District's parking layout generated a mix of reactions, feedback about our proposal has been very positive.”
The overall appearance of the tower aside, the public experience at the building's ground level, Filuk says, is what City of Victoria planners concede is ultimately the most important feature for Townline to get right.
“I appreciate that the City of Victoria planning staff always emphasize the importance of the public realm and the pedestrian experience when looking at a building's design. I have a background in urban planning myself, and perfecting the design of a building's podium levels is something that Townline is always striving for.”
Filuk managed the design of the District's recently completed Hudson Walk purpose-built rental projects (situated along the 700-block of Caledonia Avenue) and was hands-on in the programming and layout of the Hudson Walk ‘pocket park’ that features a publicly accessible dog run and a children’s play area.
“I remember a few months ago, prior to Hudson Walk Two being finished, a family walked through an opening in our construction fence and let their kids play on our newly-installed play structure. Although they could not stay due to the area being an active construction zone, the whole time I was thinking 'this is fantastic' and it's obviously something downtown Victoria desperately needs. The dog park is being well-used and I’ve noticed more and more people eating lunch at the picnic table.”
Townline has received its first round of comments from the City regarding Hudson Place One and Filuk's team is working to fine-tune both the building design and its proposed landscape plan.
“We expect to release additional renderings to illustrate what will be happening at the street level. We are also planning to put a lot of emphasis into improving the Hudson District carriageway with new lighting, additional vegetation, formal and informal seating, as well as a public art component."
Although plans for Townline’s second phase of Hudson Place are still in their infancy, Filuk says the company has “an exciting opportunity to improve the sidewalk space along Blanshard which will create such a different experience for people entering the downtown core along the busy thoroughfare.” C

Excavation begins at The Wade condo development in Harris Green 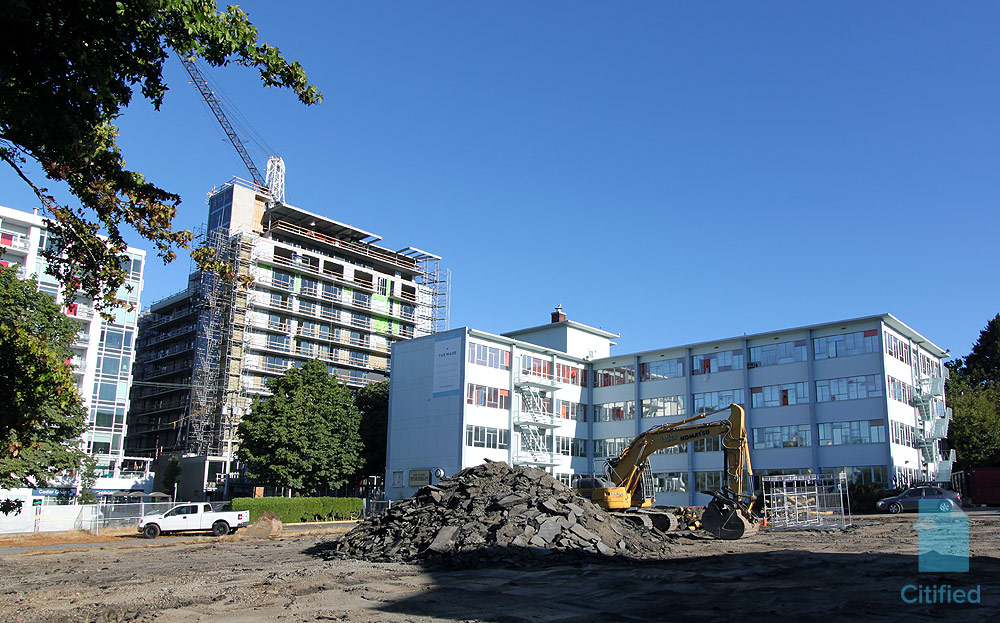