Hudson Place One, at-right, stands as Vancouver Island's tallest building at 777 Herald Street. Visible to the right of Hudson Place One is Hudson Place Two, under construction, which will rise to 23-storeys and deliver over 240 rental apartments to Victoria's downtown core.  Citified.ca

commercial, condos, rentals, Downtown Victoria, Urban core, West Shore
Downtown Victoria's Hudson Place One condo, Vancouver Island's tallest building, reaches sold-out status
MIKE KOZAKOWSKI, CITIFIED.CA
Residences within Vancouver Island’s tallest building are now sold-out, culminating a year’s-long, multi-phased sales effort that began in the fall of 2018.
Rising to 25-storeys, the Hudson Place One tower at 777 Herald Street within downtown Victoria’s Hudson District was completed by developer Townline in 2020 at a height of 85 meters.
The up-market highrise is comprised of 176 condominiums spanning from just under 500 square foot studios to nearly 1,900 square foot penthouses offering sweeping views of Victoria’s Inner Harbour, the downtown core, and Washington State’s Olympic Mountain Range.
At the time of its completion, Hudson Place One rose above Vancouver Island’s tallest building known as the Beacon in Nanaimo. At a height of 76 meters across 26 levels, the 1990s-era Beacon eclipsed Victoria’s 22-storey Orchard House, a 62 meter condominium dating to the early 1960s. In 2014 Orchard House, which held the title of Victoria’s tallest building for 52 years, was overtaken by the 66 meter, 21-storey Promontory condominium tower in Vic West.
Hudson Place One is the second of two condominium offerings at the Hudson District bordered by Fisgard, Douglas and Blanshard streets, and Caledonia Avenue. The first emerged in 2009 as The Hudson, which transformed a Hudson’s Bay Company department store on Douglas Street between Fisgard Street and Herald Street into residences and commercial spaces at ground level.
Phase two of the project saw a 12-storey rental block rise in 2014 as Hudson Mews, on Fisgard Street at Blanshard Street, and two rental towers standing 16 and 15-storeys tall (Hudson Walk One and Two) were constructed along Caledonia Avenue between Douglas and Blanshard streets in 2016 and 2017, respectively. Hudson Place One’s completion in 2020 was followed by the start of Hudson Place Two, a 23-storey rental tower comprised of over 240-units slated for completion later this year as the final phase of the district.
At 85 meters tall, Townline’s record-holder may have its days as the Island’s tallest building numbered.
Developer Starlight has proposed a 32-storey residential tower for the 900-block of Yates Street that, if approved and built, will rise to the hundred meter mark. Its sibling, at a proposed height of 28-storeys, may also surpass Hudson Place One’s 85 meters.
Over in Vic West, meanwhile, the race is on to build highrise towers at least matching the planned heights proposed by Starlight for downtown Victoria. Developer Focus Equities has outlined an updated proposal for the Bayview lands that could see nine highrise towers ranging in heights from 23 to 32-storeys.
And height race is not just confined to Victoria's downtown core or periphery areas.
On the West Shore, a 29-storey residential tower is making its way through the municipal planning process and could rise on Jacklin Road at Dunford Road in Langford. If built, the highrise may stand as the Island’s tallest provided loftier buildings fail to materialize in Victoria-proper. Already in the marketing phase is a 24 and 18-storey development from the same group behind the 29-storey proposal. Known as The Scene, the two-tower project will deliver, at least in the interim, the tallest buildings in the Capital outside of Victoria-proper. C
Receive Citified's timely real-estate news straight to your inbox. Sign up for our newsletter, and connect with us on Facebook: 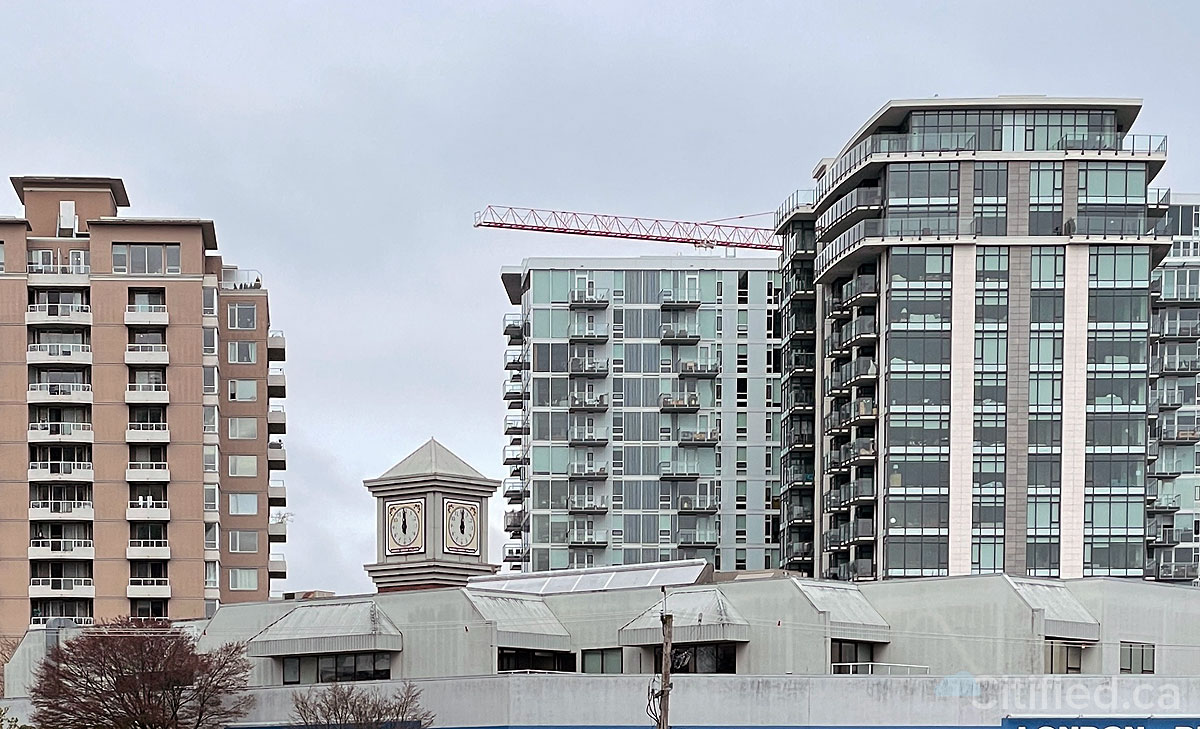