A rendering of mixed-use residential and commercial buildings at the Colwood Corners development on Victoria's West Shore. 60% of the project's retail leasing opportunities have been secured by tenants, according to commercial real-estate brokerage Cushman & Wakefield.  Cushman & Wakefield

commercial, rentals, West Shore
Colwood Corners retailer line-up unveiled as leasing program for 140,000 sq. ft. of storefronts continues
MIKE KOZAKOWSKI, CITIFIED.CA
The mixed-use Colwood Corners development at the nexus of Sooke Road and Old Island Highway at Goldstream Avenue welcomed residents to its first residential buildings late last year, and by mid-2022 new retail tenants will begin opening for business throughout eight buildings, Citified has learned.
Grocery chain Save-On-Foods will anchor the City of Colwood project with a nearly 40,000 square foot space in the ground floor level of a two-building complex comprised of nearly 130 rental suites. London Drugs, meanwhile, will remain at its present location within the retail centre, and Coast Capital Savings will move to a new-built space fronting Sooke Road.
According to commercial real-estate brokerage Cushman & Wakefield – tasked with handling some 140,000 square feet of retail leasing for Colwood Corners – seven additional tenants have formally leased units within the retail centre, four spaces have deals pending, while eight storefronts remain available (including one that can be subdivided from its 17,524 square foot size, if necessary), bringing the lease-up total to 60%.
Jeff Lougheed, Senior Associate, Commercial Sales and Leasing at Cushman & Wakefield’s Victoria office says strong interest in the West Shore’s retail landscape throughout turbulent national market conditions brought on by COVID-19 signals a healthy economic outlook for the south Island, which has fared relatively well over the last year despite challenges facing retailers and landlords.
“In the last half of 2021 and so far in 2022, we have seen an overall increase in tenant activity, with retailers and restaurants exploring options, and franchise development and expansion,” Lougheed said. “We only expect that to accelerate over the course of the year. Similarly, we’re seeing increased investor interest in acquiring retail properties, especially in the suburbs.”
That interest has translated into a flurry of signed deals at Colwood Corners, where the three-unit ‘building 4’ (coming to Sooke Road north of the new Save-On-Foods location in ‘building 1’) will welcome the Capital’s first Barburrito eatery, a Toronto-based Tex-Mex fast food chain with locations from coast to coast. Next door to the south, Lougheed says an anchor restaurant space is available, complete with a large outdoor patio.
Adjacent to ‘building 4,’ ‘building 5’s’ six-units will house the south Island’s first Mary Brown’s Chicken franchise (a Markham, Ontario-based chain of restaurants) several units down from Coast Capital Saving’s new branch at the entrance to the plaza on Sooke Road at Goldstream Avenue. Three additional units in ‘building 5’ have pending offers.
In ‘building 6,’ a stand-alone retail space opposite Coast Capital’s new location and also at the shopping centre’s entrance, TD Bank will open its newest West Shore branch with frontage onto Old Island Highway at Goldstream Avenue.
In ‘building 2,’ situated east of the two residential blocks with the upcoming Save-On-Foods, Acekids Daycare will occupy a large portion of its three-unit complex, leaving two units for lease (one of which has a pending offer, the other remains available).
To the north of ‘building 2,’ ‘building 8’ will remain anchored by London Drugs, and pet supply chain Petvalue will situate adjacent to London Drugs, a 4 Mile liquor store (currently operating at a strip mall across the street from Colwood Corners) will move in Petvalue’s right, and cannabis retailer Rise will open adjacent to 4 Mile. A single retail unit remains available in ‘building 8.’
‘Building 7’, as a single-unit island at the centre of the plaza, is earmarked for a restaurant or cafe with a yet unnamed operator. One additional retail space adjacent to Save-On-Foods in ‘building 1’ is also available.
“Overall, limited availability of retail space has put upwards pressure on net rental rates in the suburbs, with demand especially strong from quick-service restaurants that offer delivery,” Lougheed said, speaking to the popularity of new-build, smaller footprint storefronts among fast-food and take-out operators, which have shown strong interest in Colwood Corners and the West Shore in general. Lougheed also notes that “appointment-based and grocery-anchored retail has been stable, if not outperformed [expectations], and [the industry is] seeing increased demand from both segments, as well.”
That market segment aside, Lougheed says bigger storefronts within shopping malls or at outdoor retail environments continue to adapt to current market dynamics propelled by online shopping and fast delivery services, and notes that the larger unit retail segment remains “soft” in its demand for expansion opportunities.
Lands for what would eventually become the first phase of Colwood Corners were acquired by Vancouver-based Onni Group in 2014 following the collapse of a former development effort at the site known as Capital City Centre in 2013. Onni’s acquisition of the 12.5-acre property saw a new architectural direction emerge in 2016, with construction on the current phase launching in 2017.
Future phases of construction will include additional residential buildings along Jerome Road and Belmont Road. Most of the housing at Colwood Corners is currently planned as purpose-built rentals. C
Receive Citified's timely real-estate news straight to your inbox. Sign up for our newsletter, and connect with us on Facebook: 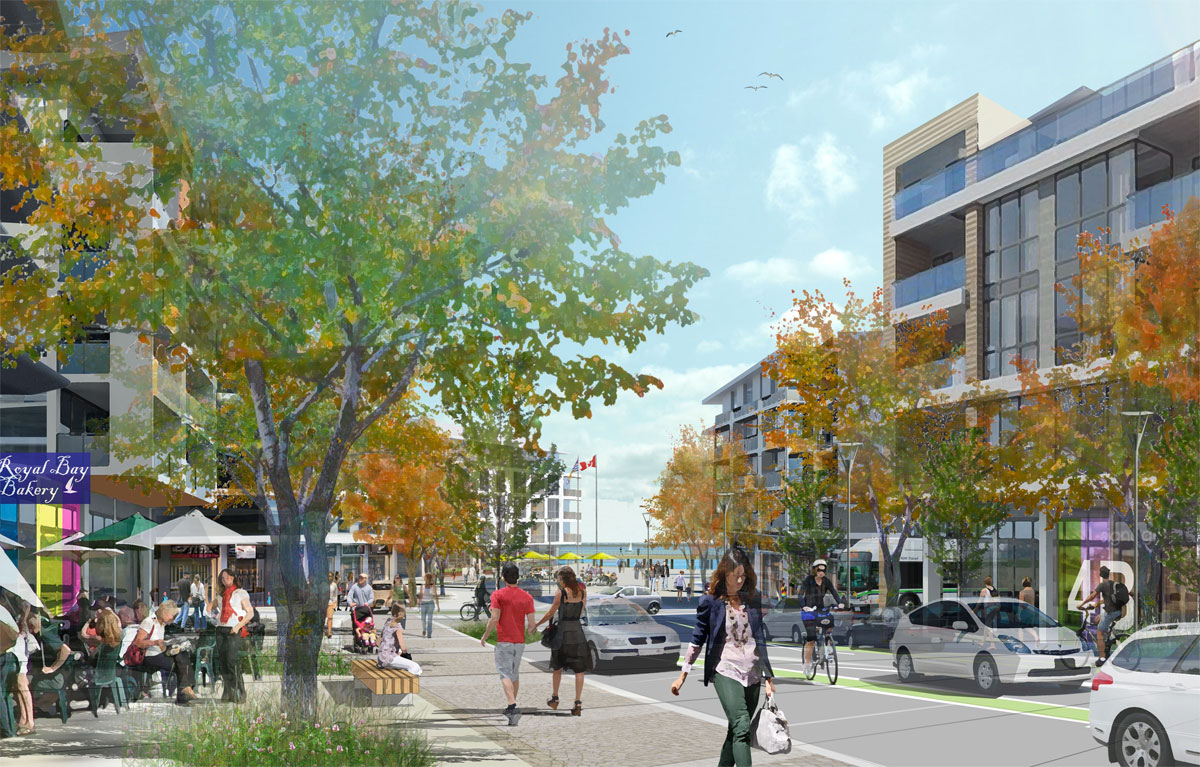