Towering over its neighbours at downtown Victoria's Hudson District, the 25-storey Hudson Place One condominium has claimed the title of the city's tallest building at only 22-storeys in height. Hudson Place One will eventually rise to 85 meters above its Herald Street location.  Citified.ca

commercial, condos, Downtown Victoria
At 22 of its 25-storeys, Hudson Place One condo tower stands as Victoria's tallest building
MIKE KOZAKOWSKI, CITIFIED.CA
A condominium tower under construction in downtown Victoria has become the tallest building in the city as it pushes skyward to its eventual status as Vancouver Island’s crowning skyscraper.
Hudson Place One, a 25-storey, 176-suite luxury residence from Vancouver-based developer Townline, has been rising from its Herald Street site (between Douglas and Blanshard streets) since 2018 and as of this week the 22-storey work-in-progress has clinched a title so few buildings in the Capital ever have.
“Hudson Place One has officially surpassed Victoria’s 66 meter tall Promontory tower to become Victoria's tallest building, and is only the second highrise to hold that title since the 1960’s completion of Orchard House in James Bay,” said Elise Virtue, the project’s sales manager.

Orchard House, a 22-storey, 62 meter tall condominium on Michigan Street was built as both the Island's and Victoria's tallest building. It remained as such until Nanaimo’s 76 meter The Beacon condominium eclipsed it in the mid-1990’s.
Orchard House redefined Victoria’s skyline as James Bay underwent rapid densification that transformed the heavy industry-laden area into a residential node. That same transition eventually arrived in Vic West, where the 21-storey Promontory overtook Orchard House in 2014 but was not tall enough to stand over The Beacon.
Titles aside, height matters in downtown living with taller buildings in Victoria’s core vying for view corridors amid strict height limits that only recently pushed north of a city-wide 43 meter maximum imposed in the 1970's.
“Upon completion Hudson Place One will stand 85 meters above the Hudson District, taller than any other building in its vicinity, with residents enjoying breathtaking scenes of downtown Victoria, the Inner Harbour, the Salish Sea and the Olympic Mountain range beyond,” Virtue said, adding that the “opportunity for unimpeded views of one of the most beautiful cities in the world has been a key selling point among purchasers.”
The tower’s 176 luxury residences – priced from $390,900 – feature spa-inspired bathrooms, world-class kitchens and opulent finishings with smartly-designed living spaces that maximize utility while taking advantage of the backdrops beyond with expansive windows.
Extensive amenity offerings begin with full concierge services, a fresh room with cold and dry storage for residents' deliveries, an electronic parcel delivery room and secure bicycle storage with a repair station conveniently accessible through a separate entrance next to the lobby.
The third floor is designated as an 11,000 square foot indoor and outdoor amenity space featuring private gardens, a dining and social lounge, a yoga room, a hobby room, a business centre and a guest suite. Residents will also enjoy a fitness centre, a billiards room overlooking the gardens and an infrared sauna.
Situated next to the Public Market and minutes by foot to Chinatown, grocery stores and downtown Victoria's eclectic mix of retail amenities, Hudson Place One gives residents the very best of a walkable lifestyle in the heart of the city.
Hudson Place One is scheduled to welcome residents to the Hudson District by early 2020. Home to the Victoria Public Market, a collection of condominiums within a restored Hudson’s Bay Company department store and three highrise rental towers, the District is one of downtown Victoria’s most sought after residential communities home to over 500 completed residences and a popular collection of local businesses. C
Receive Citified's timely real-estate news straight to your inbox. Sign up for our newsletter. 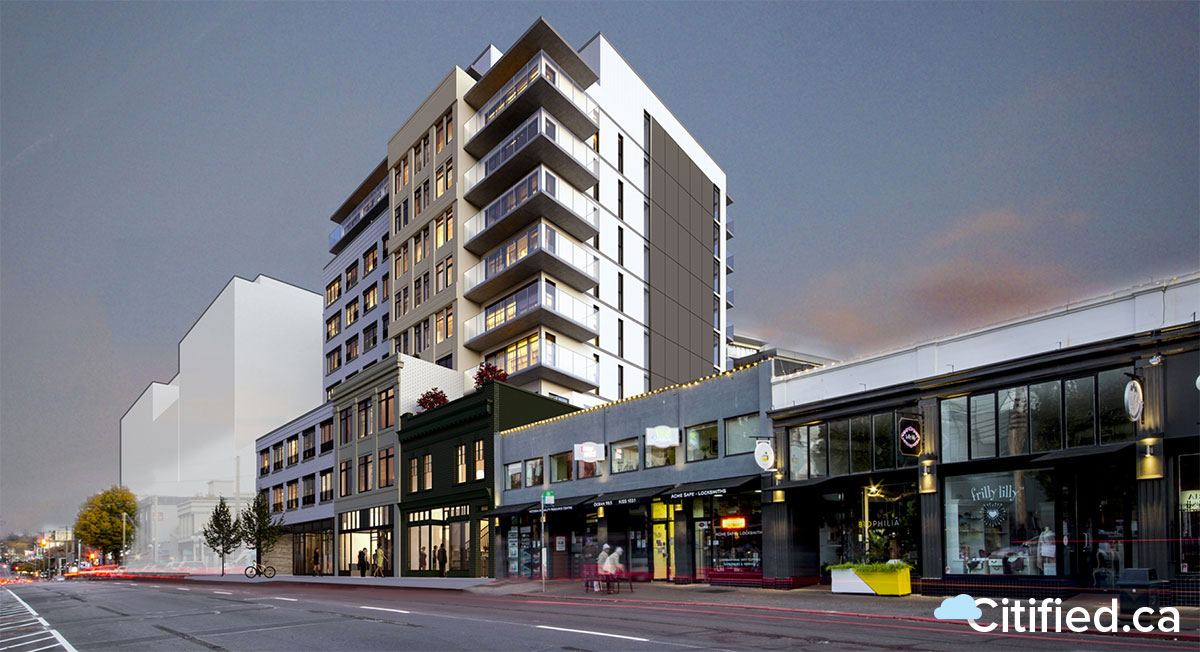