An artist's sketch of 1400 Vancouver Street, a 15-storey residential tower proposed for the 900-block of Johnson Street at Vancouver Street. The building's unique angled eastern frontage will serve as its most iconic architectural element.  Cox Developments

commercial, condos, rentals, Downtown Victoria
Angled 15-storey highrise pitched for Johnson at Vancouver could rise as Victoria’s own leaning tower
MIKE KOZAKOWSKI, CITIFIED.CA
Victoria-based Cox Developments has submitted a proposal to the City of Victoria with plans to build one of the most architecturally unique residential towers in the Capital Region, Citified has learned.
The angled 15-storey design –leaning to the east from its footprint on land formerly occupied by the McCall Brothers Funeral Home along the 900-block of Johnson Street at 1400 Vancouver Street – will be an architectural first for Victoria where a building as prominent as the 50-metre tall highrise will literally hover over its foundation and an adjacent 1960’s-era funeral chapel designed by famed Victoria architect John Di Castri.
"We like to push architectural norms with our projects, and we wanted to do something very different and very unique on this site," says developer Dan Cox. "The building design stemmed from a desire to see the chapel retained and repurposed, given the role it has served in our community, and the importance of this building to Victoria's architectural heritage."
Envisioned by San Diego-based AVRP Architecture, the tower's shape and architectural elements are meant to reflect the design of the chapel while its massing reclaims lost density at the base through greater density on the upper floors.
"In order to preserve the chapel and to give it more breathing room at street level, we had to find another way to ensure we could make the finances work without pushing for a taller structure. The design we submitted allowed us to achieve both the density we needed while giving the chapel the presence it deserves," Cox said.
Featuring 93-units of one, two and three-bedroom homes, 1400 Vancouver Street will rise as Cox Development’s fourth residential complex following V1488, a 13-storey rental tower recently completed along Pandora Avenue at Cook Street, the two-tower (15 and 17-storey) 989 condominiums now underway immediately across the street from the proposal, and 1088 Johnson Street, the 10-storey second phase of V1488.
The project will incorporate a ground floor commercial component with frontage onto Johnson Street while the chapel's future use has yet to be determined.
Alongside its unique architectural presence, Cox says the building's roof is likely to include a solar panel installation as an eco-friendly element. The tower's solar panel installation would be a first at its scale for a modern building in the region and one of the first such installations on Vancouver Island.
Pending municipal approvals anticipated by mid-2019, construction could get underway later that year with completion by 2022. C
Receive Citified's timely real-estate news straight to your inbox. Sign up for our newsletter. 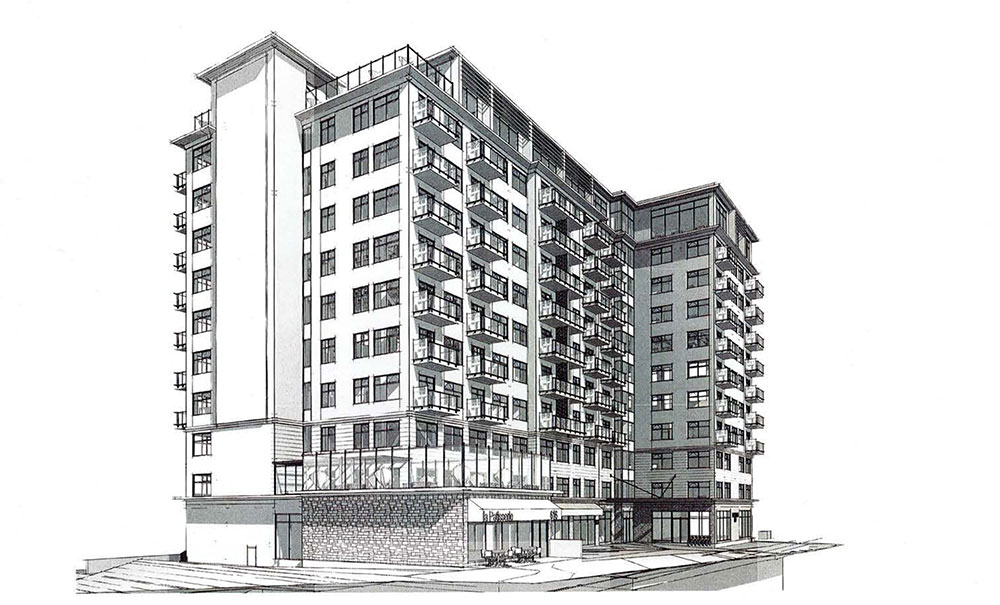