Crews dismantle a row of commercial buildings fronting the 1500-block of Douglas Street in preparation for the 1515 Douglas office development by Jawl Properties.  Citified.ca.

The City of Victoria is in the midst of an office space development boom as developers race to add nearly 600,000 square feet of modern work spaces to the downtown core and periphery areas.

Driving demand is a combination of government and private expansion strategies together with a growing trend to vacate aging spaces in favour of newly-built digs. The provincial government in particular, which has contended with aging building infrastructure for many of its local employees, is seeking to modernize work spaces in an effort to provide healthier and more environmentally-friendly work environments.

Serving as a prime example of government's shift to modern offices spaces is the Capital Park development currently under construction in the legislative precinct of James Bay. To be built over several phases by partners Jawl Properties and Concert Properties, Capital Park will create 235,000 square feet of office space in two five-storey buildings. Some 175 residential units will flank the office component in three lowrise woodframe apartments to create a vibrant mixed-use community behind the BC Legislature along Superior Street. Construction is currently underway with completion estimated for 2017.

Clocking in at 273,000 square feet of office space and some 21,000 square feet of ground floor commercial space is 1515 Douglas, a two building, 13- and six-storey development at Douglas Street and Pandora Avenue in downtown Victoria. According to sources familiar with the project, a mix of private and government tenants will assume space in the buildings. Once built in 2018, the 13-storey phase will claim the title of the tallest office building on Vancouver Island at a height just shy of 54 meters and will represent the largest office building developed by Jawl Properties.

At the high-profile corner of Government and Wharf streets overlooking the focal point of the Inner Harbour is Customs House, a mixed-use development by Cielo Properties that will incorporate 61,000 square feet of office space, 43 rental apartments and 14,000 square feet of ground floor commercial space in two buildings. The project will include a full restoration of the historic Customs House building and a new-build component rising to seven-storeys along Government Street, much of which is expected to be leased to a financial institution. Construction is expected to begin next year with completion slated for 2018.

As part of the Azzurro mixed-use affordable housing development by the Greater Victoria Rental Development Society, 11,000 square feet of second storey office space is available for lease or purchase on Blanshard Street at Discovery Street in a seven-storey building. The project is expected to be completed by next fall.

Victoria's current and upcoming office space construction comes on the heels of recently completed projects in and near downtown Victoria totalling 134,000 square feet, signalling the south Island's economy is going strong with industry showing optimism over the medium term. C

Demand for spacious, eco-friendly urban living brings townhomes back in a big way 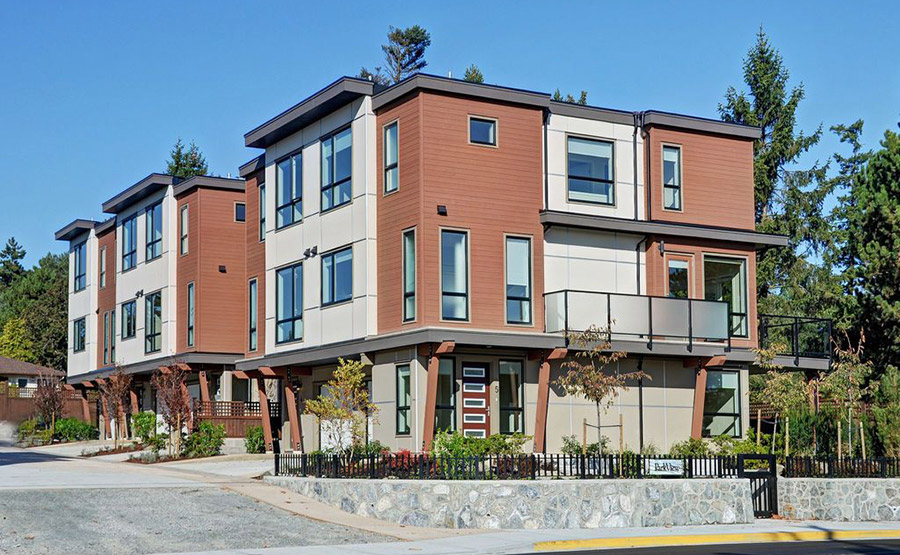