civic, commercial, condos, hotel, offices, rentals, Urban core
2,000 rental apartments and a Frank Gehry-designed cultural centre form updated vision for Vic West's Roundhouse lands
MIKE KOZAKOWSKI, CITIFIED.CA
Further refinements to one of the largest development proposals within the City of Victoria have been submitted to the municipality, building on a rezoning submission unveiled in the spring of 2020 that could deliver some of the tallest buildings on Vancouver Island and a performing arts centre designed by a world-renowned architect.
Focus Equities’ Bayview Place master-planned community between Esquimalt, Tyee and Kimta Roads and Catherine Street in Vic West's Songhees district, underway since the late 2000s and in planning since earlier that decade, is in pursuit of changes to a rezoning for its Roundhouse component centred on a historic E&N Railway locomotive roundhouse and car shop.
The project took a significant turn last year when Focus Equities proposed a significant departure from its initial plans for the Roundhouse lands, which had previously been approved as a mixed-use shopping destination. As of 2020, Focus shifted gears to re-align the built form with a significant upswing in rental housing densities across residential towers pushing north of 30-storeys – a move the company considers necessary for the viability of the project – and a diversification of its commercial, cultural and retail amenities.
This spring, the vision has crystallized with an application that could yield as many as 2,000 rental apartments in a collection of four towers on the ‘north’ side of the Roundhouse parcel and two on the ‘south’ side, a split roughly along the E&N Railway tracks that span across the property, and which will be slightly re-aligned to assist with spacing.
The north side is proposed with rental towers standing 21 to 31-storeys tall and a condominium tower rising to 28-storeys. The south side will include one rental tower of 21-storeys, a 25-storey condominium tower already approved as part of an earlier application, and two additional towers in the form of a condominium and hotel that will flank a performing arts centre. Affordable housing will total some 25,000 square feet of residential density that is estimated to land at 1.7 million square feet.
The cultural hub on the south side, between the hotel and planned condominium towers, could be designed by famed architect Frank Gehry, a visionary of the architectural field known for his eclectic style that infuses shapes and curvatures often appearing to defy the possibilities of the built form.
Speaking to the potential of his involvement in the project, Gehry expressed strong support for the Bayview Place and Roundhouse visions.
“I have always tried to select projects that are dedicated to excellence and humanity. This project seems like it could be one of those unique opportunities, made even more special because it is in Canada, my native land,” Gehry is quoted as saying in a document supplied to the City. “I am looking forward to helping, where I can, with the vision and fulfillment of this very special project.”
Gehry’s involvement in the design of a cultural building would arguably put Bayview Place, and by extension Greater Victoria, on the world map in terms of modern architecture and a must-see nouveau architectural landmark.
Across both the north and south parcels, commercial spaces will total nearly 140,000 square feet, mostly as ground floor retail areas and a market-like shopping destination within restored heritage buildings at the E&N Railway yard.
235,000 square feet will serve as open space, and 11,000 square feet will be designated as a new park in addition to green spaces already created as part of the eastern side of Bayview Place known as Hilltop.
With an active rail line still running through the site – albeit with no scheduled rail services due to the E&N Railway’s cessation of regularly scheduled up-Island services and no freight traffic – Focus hopes to incorporate a transportation component into the plan that may eventually connect West Shore commuters with the city centre. Such a rail service has been in discussion for the better part of the last decade, although senior levels of government have yet to allocate resources supporting such an initiative. The new transportation concept is referred to as rail-to-sail, in keeping with the Songhees neighbourhood’s coastal setting.
Focus' updated plan was submitted to the City of Victoria for review in early March. The municipal process is expected to carry on throughout 2021 and potentially into 2022.
From the application documents submitted to the City, Focus Equities describes the comprehensive outlook for its Bayview Place lands:
“This bold new vision, imagines a place where historic buildings can be the brought back to life within the context of a complete and vibrant community that includes viable retail and social spaces, memorable public open spaces with destination-quality character, curated rail history interpreted and infused throughout, integrated city-wide mobility infrastructure, a broad range of housing types to accommodate a more diverse resident population, and sustainably addressing affordability and access.” C
Receive Citified's timely real-estate news straight to your inbox. Sign up for our newsletter, and connect with us on Facebook: 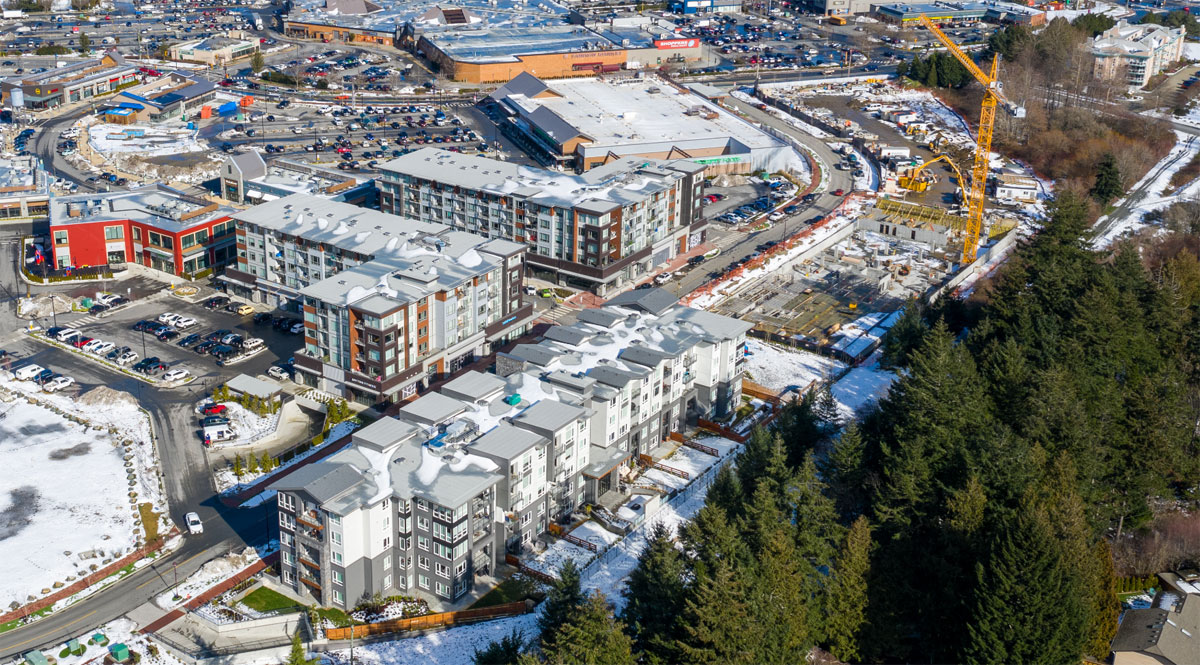