Langford's Tri-Way Mobile Home Park on Spencer Road at the Trans Canada Highway is in its first phase of redevelopment with the construction of a five-storey affordable rental complex from the Capital Region Housing Corporation.  Google

rentals, West Shore
$20 million affordable seniors and family-oriented rental project rising at Langford's Tri-Way Mobile Home Park
MIKE KOZAKOWSKI, CITIFIED.CA
The Capital Region Housing Corporation (CRHC) is building an affordable senior, single occupant and family-oriented development at Langford’s Tri-Way Mobile Home Park across the street from a recently occupied affordable housing project.
Designed for 58-units in studio, one and two-bedroom configurations, the $20 million five-storey complex is underway at 2782 Spencer Road with completion planned for next year. Homes will be “sized and designed to suit the needs of seniors,” according to the CRHC, and rents will be targeted at low to moderate income earners with 11-units available at provincial income assistance shelter rates.
CRHC’s concept emerged last year as the first phase of redevelopment at the park, following the sale of Tri-Way to a south Island development firm. A relocation proposal to assist homeowners and individuals residing at Tri-Way with future accommodation was submitted to the City of Langford by developer Tri-Way Development Ltd. that included a mix of mobile home buy-outs, options for residency in a new affordable housing project nearby (at 2763 Spencer Road), residency within the upcoming CRHC facility on Tri-Way land, and in some cases, the opportunity to remain on-site within a retained mobile home component of the Tri-Way property.
However, a parking variance that had been sought for the new build totalling 35 parking spaces for 58 homes became a sticking point for a group of Tri-Way residents planning to transition out of their mobile homes and into the upcoming apartments.
According to a document filed with the City of Langford and attributed to TriWay [sic] Park Residents, a “minimum of 25 homeowner residents being bought out from Tri-Way Park will seek accommodation in the proposed [CRHC] building.” Given the rate of vehicle ownership among the park’s residents, the group believed on-site parking plans – at roughly one stall for every two units – would be inadequate.
“There are currently 78 homes and approximately 106 residents. Only an estimated five homes do not own vehicles. Many homes have two vehicles,” the document states. “It is reasonable to assume that in Tri-Way currently there are 100 vehicles and 106 residents which would make an average ratio of one vehicle/parking space per unit. Tri-Way residents moving into the proposed building are not necessarily invalids nor are they intending to give up the vibrant lifestyle they currently enjoy. They would be moving because they have been evicted as a result of redevelopment.”
The proposal ultimately moved forward with 58 parking stalls, or a one-to-one unit-to-parking stall ratio called for by the park’s residents.
Meanwhile, a portion of Spencer Road’s right-of-way near its terminus at the Trans Canada Highway was sold to the developer for $35,000. The roughly 3,000 square foot portion of public right-of-way was added to the Tri-Way lands by way of disposition by the City of Langford. Such dispositions are considered by municipal governments in cases where a portion of public land or a public right-of-way are no longer required.
Tri-Way Development Ltd.’s holdings span approximately 50-acres and include the Tri-Way mobile home park lands between Spencer Road and Leigh Road, as well as a tract north of the Trans Canada Highway abutting Leigh Road. C
Receive Citified's timely real-estate news straight to your inbox. Sign up for our newsletter, and connect with us on Facebook: 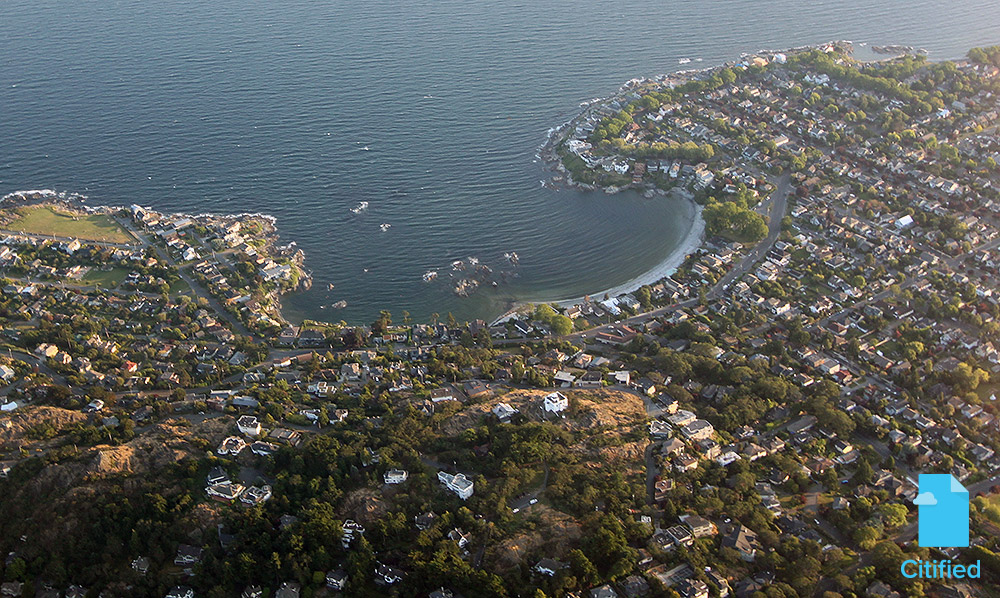