A rendering of Harris Green Village's first phase, comprised of two rental residential towers and a multi-storey podium with ground floor retail spaces, on Yates Street at Cook Street. The project's second phase is planned for the 900-block of Yates Street between Vancouver and Quadra streets.  Starlight Developments

commercial, rentals, Downtown Victoria
20 and 21-storey first phase of Harris Green Village redevelopment targeting late 2021 approvals
MIKE KOZAKOWSKI, CITIFIED.CA
The first phase of downtown Victoria’s multi-acre Harris Green Village project is on-track for a public hearing by year’s end, according to proponent Starlight Developments.
Envisioned with five residential towers spanning the 900 and 1045-block of Yates and View streets (between Quadra and Cook streets), the proposal could add upwards of 1,500 units of rental housing to downtown Victoria and approximately 94,000 square feet of modern street-level retail space.
Mark Chemij, Director, Development for Toronto-based Starlight says public input since the plan’s fall 2019 unveiling has helped shape a comprehensive application that is now considered finalized and awaiting formal feedback from the City of Victoria.
“We recognize this is an important area of the city as a gateway to downtown and a place that is well used by the community. We have been able to gather the community’s thoughts and ideas for these sites over the past two years to help us inform this application,” Chemij said, adding that City staff assisted with "refining the project to ensure it is the best possible proposal going forward.”
Key changes between the early and present-day concepts for the 1045-block, also known as phase one, are in the form of design refinements to the towers, and a shifting of residential massing from a six-storey podium to a duo of highrise towers now proposed at 20 and 21-storeys with market-leading roof-top amenities for residents.
“Based on community and municipal feedback we have reduced the podium heights from six and five-storeys to five and four-storeys,” Chemij says.
“The reduction in podium heights has been transferred to the towers, nudging their heights up while providing more sunlight at street level. The towers are also set back from the property line, which makes for a much nicer development, and residents will have the opportunity to make use of rooftop areas unmatched by anything else in the city.”
Phase one will rise on what is currently the Harris Victoria Chrysler Dodge Jeep Ram automotive dealership which is slated to move to a 36,000 square foot complex now underway on the West Shore near Langford’s Lowe’s home improvement store. The transition is expected by late 2021.
Pending municipal approvals for Starlight’s submission, site preparation along 1045 Yates Street will begin in late 2021. Following the completion of phase one the larger phase two, Chemij says, will proceed where landmark retailers London Drugs, The Market on Yates and Bosley’s currently operate.
“We anticipate the construction timeline for phase one to span approximately three years, with phase two's three residential towers, a public plaza, and ground floor commercial spaces commencing afterwards.”
In-keeping with the massing redistribution in phase one, phase two has shifted to taller towers in lieu of bulkier podiums. Tower heights are now planned at 27, 28 and 32-storeys compared to 24, 25 and 28-storeys, respectively, signalling the potential for another ‘new tallest building’ in downtown Victoria should the recently completed 25-storey Hudson Place One condominium's 85 meter height be surpassed.
Despite the many challenges brought on by COVID-19, Starlight remains bullish on Victoria’s future given the region’s desirability as a place to call home, and an economic outlook that hints at a strong post-COVID recovery. The anticipated return to near-normalcy by 2022 is likely to exert pressures on already low rental vacancy rates, and yield stronger demand for modern commercial spaces.
Going by the submitted proposal, Harris Green Village is poised to supply what the city needs over the near term, and do so in sufficient quantities at a time when work-at-home employment opportunities are likely to put a larger onus on downtown’s population helping support downtown businesses.
“Victoria’s economic and social fundamentals remain strong, and our goal with Harris Green Village is to provide high-quality purpose-built rental homes and up-market commercial destinations for the downtown core as employment standards change, and downtown retailers transition to servicing a more locally-based population,” Chemij says. “Victoria has one of the lowest vacancy rates in Canada and we are looking forward to providing a large infusion of sought after, centrally located housing for a wide spectrum of residents and retail partners to serve their needs.”
Starlight Developments, a division of Starlight Investments, is one of Canada’s largest owners of rental housing with thousands of units under management across the country and throughout the United States.
The company owns several purpose-built rental properties across the Capital Region, including a collection of highrise towers in James Bay. Starlight's acquisition of the Harris Green Village shopping plaza and the Harris automotive dealership stems back to 2016. C
Receive Citified's timely real-estate news straight to your inbox. Sign up for our newsletter, and connect with us on Facebook: 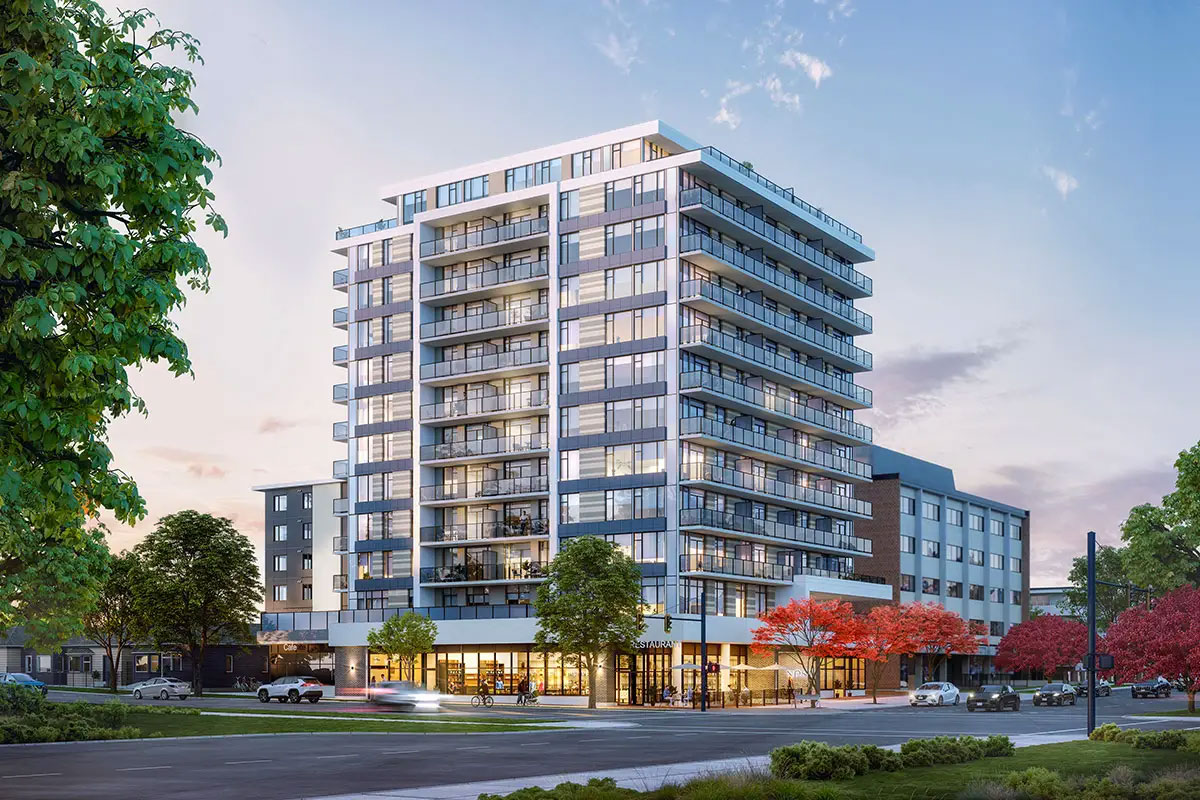