An aerial view looking south towards downtown Victoria from the Tolmie Road Saanich-Victoria border. Marked in blue is 760 Tolmie Avenue, a property that formerly housed bowling alley Mayfair Lanes. The land was cleared in 2007. Ontario-based Loblaw has listed the land for sale, with an 'in-tow' grocery store lease from Loblaw as part of the deal.  Google/Citified.ca

commercial, condos, rentals, Urban core
16 years vacant, $17.2M Mayfair Lanes property hits the market; Loblaw-branded grocery store to anchor future dev
MIKE KOZAKOWSKI, CITIFIED.CA
A decade-and-a-half following Mayfair Lanes’ closure, the building's razing and the property's sale to Ontario-based Loblaw corporation, signs of progress are on the horizon for what is currently a vacant 3.4-acre parcel straddling the Victoria-Saanich Tolmie Road border.
Sold to Loblaw in 2006, the now-vacant holding at 760 Tolmie Avenue, bordered by Tolmie Avenue, Oak Street and Roderick Street – just east of Douglas Street and north of Mayfair Shopping Centre – the Loblaw property was initially planned as the site of a two-storey Real Canadian SuperStore before those plans stalled in 2007.
The proposal was eventually placed on-hold, with the last documented update regarding a land-use application for the site emerging in 2010 and known then as the Oakview Shopping Centre.
Now, Loblaw has listed the property for sale, and intends to lease back a large anchor retail space for a Loblaw-branded grocery store as part of a future mixed-use development at the hands of new owners. In the Vancouver Island and southern B.C. market, the company operates under brand names that include Real Canadian SuperStore, Wholesale Club, T&T Market, Shoppers Drug Mart, and No Frills.
The sale appears to have been spurred by the recently unveiled Uptown-Douglas Plan from the District of Saanich, which calls for significant densification of Saanich’s ‘core’ between Tolmie Avenue and the Uptown Shopping Centre precinct along the Douglas Street corridor.
“With a new official community plan encouraging higher mixed-use densities and an ‘in tow’ 100,000 square foot lease with Loblaw, this offering represents an incredible opportunity to secure a marquee development property within the core of the Capital Regional District,” 760 Tolmie Avenue listing documents state.
Building heights of up to 24-storeys are possible at 760 Tolmie Avenue, a scale already under consideration for Uptown Shopping Centre’s fourth and final phase at Carey Road and Ravine Way which will rise as a residential tower with ground level commercial spaces.
Although no asking price is disclosed within the sales brochure from listing agent and commercial real-estate brokerage Marcus & Millichap of Vancouver, the property is assessed at $17.2 million as of 2021.
Meanwhile, multiple proposals are now emerging in the immediate area to take advantage of the Uptown-Douglas Plan, including a nearly 170-unit six-storey mixed-use development from Aryze Developments on Douglas Street at Cloverdale Avenue at the former location of Island Outfitters. Near the intersection of Blanshard Street and Cloverdale Avenue, two blocks east from Aryze’s site and the Loblaw property, Saanich developer Woodsmere Holdings has plans for two rental blocks with nearly 300-units between them. And the Victoria-based office of real-estate brokerage CBRE has recently listed for sale a nearly 1.5-acre holding on Blanshard Street at Cloverdale Avenue, at the northwest corner of the intersection.
On the Victoria side of upper Douglas Street, Victoria’s Mike Geric Construction is building Tresah, a mass timber-designed condominium tower with nearly 250-suites on Speed Avenue near Mayfair Shopping Centre. Tresah, now selling, is kick-starting the redevelopment of what has been dubbed the Mayfair District centred on Douglas and Finlayson streets. C
Receive Citified's timely real-estate news straight to your inbox. Sign up for our newsletter, and connect with us on Facebook: 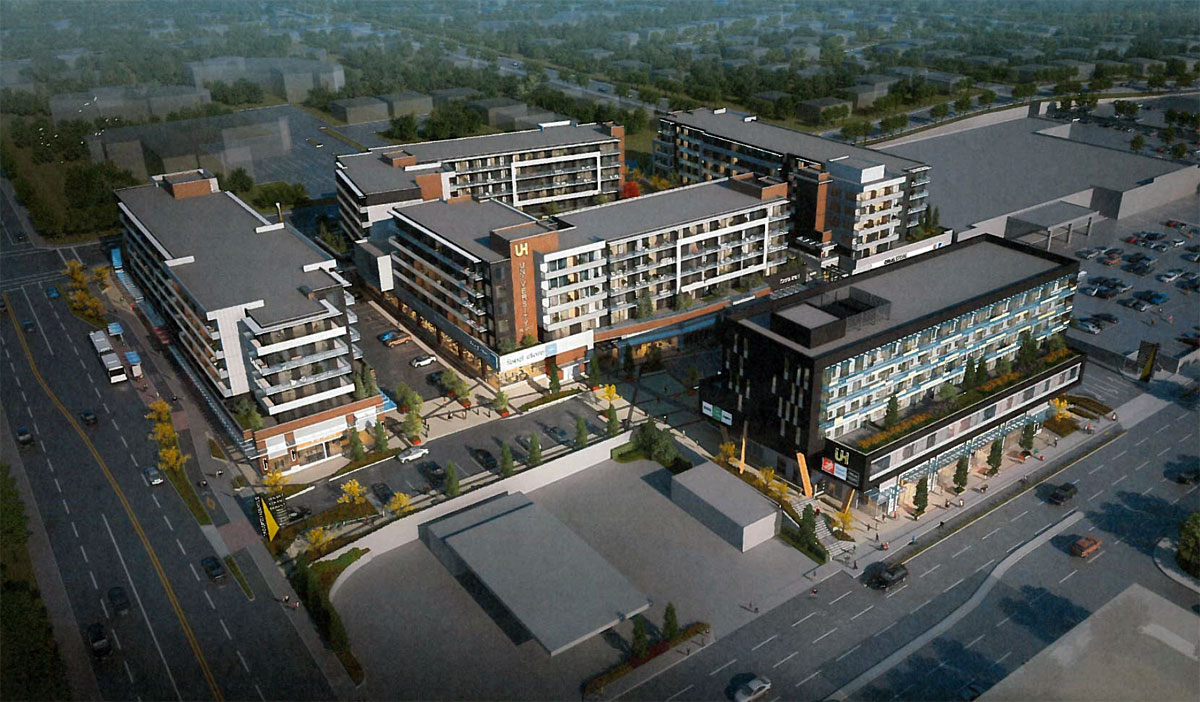